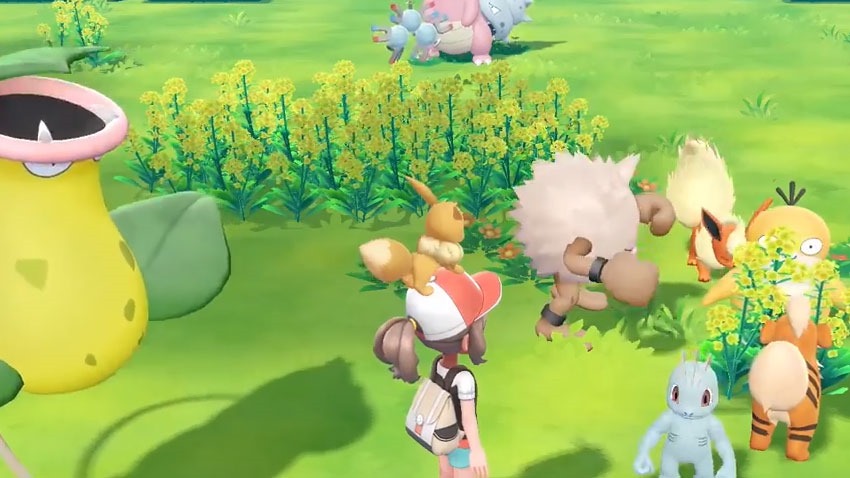 It may not be the kind of Pokémon game that longtime fans are used to, but there’s still plenty to love about Pokémon Let’s Go Pikachu and Let’s Go Eevee. It’s a game that harkens back to a simpler time, an age when Ghost-type pocket monsters weren’t modelled after random household items and when Team Rocket was the only nefarious game in town.

The fact that it’s a new generation remake of the classic Red and Blue games that’ll be available with current-gen enhancements and on arguably Nintendo’s greatest mobile gaming device ever is reason enough for me to want to blast off and grab it. That’s not the only trick up the sleeve of these Eevee and Pikachu fronted games however, as Nintendo’s flagship series happens to have a link to the Pokémon GO games that took the mobile world by storm last year.

Don’t believe me? See for yourself what I’m on about in the latest trailer for Pokémon Let’s Go Pikachu and Let’s Go Eevee:

Get ready for a whole new way to GO, Trainers! Explore everything from the GO Park complex to the Play Yard, use Candies to strengthen your team, and battle Legendary Pokémon in Pokémon: Let’s Go, Pikachu! and Pokémon: Let’s Go, Eevee!

Here’s the full breakdown from the press release, that details the mini-games, GO Parks and candy. I like candy, which explains why I look the way that I do, I guess.

In Pokémon: Let’s Go, Pikachu! and Pokémon: Let’s Go, Eevee!, players will be able to use a Bluetooth connection to bring Pokémon they have caught in Pokémon GO into the Kanto region to join them on their adventures. Pokémon that are transferred from Pokémon GO will appear in a place called the GO Park complex, located in Fuchsia City. The GO Park complex is made up of 20 individual GO Parks, and up to 50 Pokémon can be kept in each one.

To take Pokémon stored in the GO Park complex on their journey across the Kanto region, fans will have to find and catch them within a GO Park first. Trainers are not limited to connecting with just their own Pokémon GO account, though—there is no limit to the number of Pokémon GO accounts that can be tied to a single save file, so they can receive Pokémon from their friends and family, too. Once 25 of the same species of Pokémon are in the GO Park complex, fans will be able to play a special minigame to win Candies.

Power Up Pokémon With Candy

By using Candies in Pokémon: Let’s Go, Pikachu! and Pokémon: Let’s Go, Eevee!, players will be able to power up their Pokémon. Pokémon will grow stronger after taking part in battles, but by giving their Pokémon Candies, players will be able to raise the specific stats of that Pokémon. Different types of Candies will have different effects—for example, some can increase a Pokémon’s Attack and others can increase a Pokémon’s Speed or Defense.

These Candies can be obtained in a variety of ways, including transferring Pokémon to Professor Oak, successfully completing games in the GO Park complex’s Play Yard or by taking Pokémon for a stroll via the Poké Ball Plus* device. By collecting and utilizing these Candies, it is possible to create a very strong Pokémon team.

Legendary Pokémon in the Kanto Region

In the Pokémon world, there are incredibly powerful Pokémon that are rarely seen but are spoken about in the region’s myths. These are known as Legendary Pokémon. In the Kanto region, players will be able to find several Legendary Pokémon, including the Legendary bird Pokémon—Articuno, Zapdos and Moltres. The way to catch these Pokémon in Pokémon: Let’s Go, Pikachu! and Pokémon: Let’s Go, Eevee! is different from how most other Pokémon are caught.