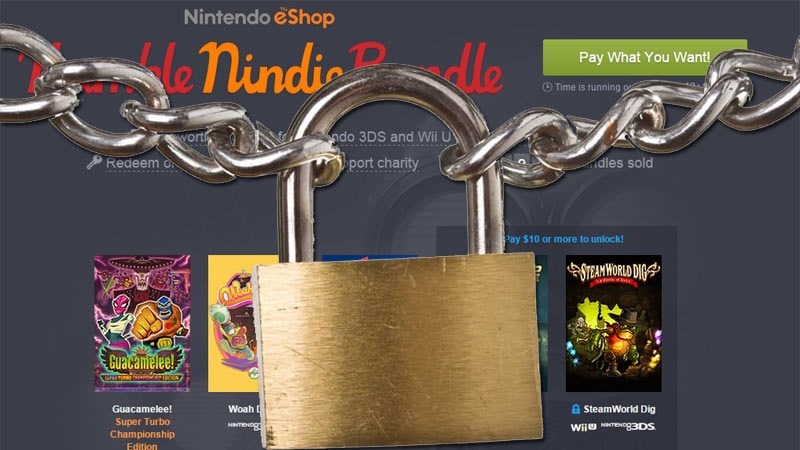 On paper, Nintendo’s Humble Bundle deal sounds good. Damn good. Too good to be true in fact. And it sort of is. Right now, a dollar or more gets you indie classics such as Guacamelee on your Wii U and the likes of Mighty Switch Force and Woah Dave! on your 3DS. A great deal for three great games, with higher pledges unlocking more content for you. If you’re in a selected territory that is.

The current Nintendo Humble Bundle is a region-locked loss to many, only available in North And South America. That leaves many a player out in the cold, including heavyweight European regions.  And it’s not because Nintendo doesn’t care. They actually did heavily pursue having those games available worldwide, but several months of talks and deals didn’t exactly pan out.

That’s according to Nintendo of America’s Damon Baker, who happens to be hopeful that some sort of deal will one day be finalised for everybody else in the world:

@Jason_Lepine @seven5three Yep, it’s only a @NintendoAmerica deal. Tried for months to make it global but we’ll get there eventually!

And I’d sell what’s left of Geoff’s regular sleeping patterns for such a deal. As much as I love my Wii U, it has a habit of gathering dust between big releases. But for some reason, I’d love to turn it into a dedicated indie game machine. For cheap, of course. And possibly feeling slightly better about myself and hoping that my karma finally re-aligns towards the positive side when my cash gets divvied up between charities. Yes, that.