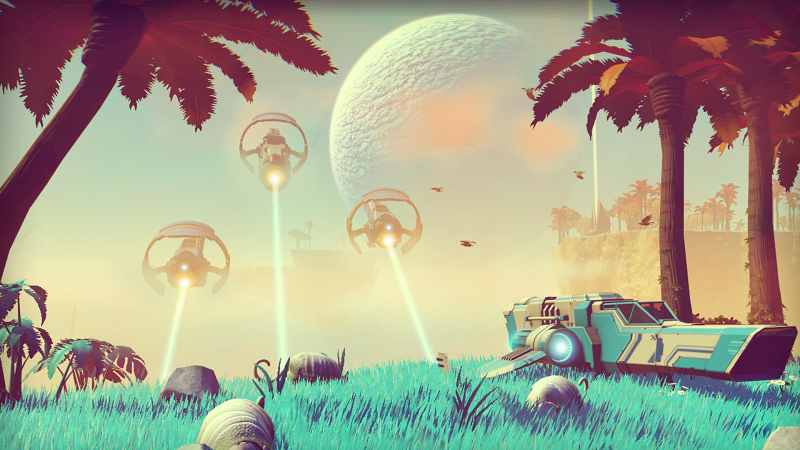 I’m extremely excited for No Man’s Sky, but the more I read about the game the more I realise that I actually have very little clue what it’s about. We already know that there are going to be millions of procedurally generated planets, trade routes, multiplayer and , my personal favourite, space dinosaurs, but that’s just scratching the surface. In fact, Hello Games hasn’t even shown off some of the game’s more interesting features yet.

No Man’s Sky is out this year, but creative lead Sean Murray says that there are still features of the game that haven’t been made public knowledge yet. One of those features is resource gathering, which pairs up nicely with destructible terrain that can be found all over the random planets. Speaking to Eurogamer at last year’s A Night Under No Man’s Sky event, Murray explained how the game makes picking up rocks fun.

“Resource gathering in every game is normally super boring, and people purposely make it like a chore. And we want it to be fun. It’s something we’re still playing about with. It’s quite fun to be able to do it from a distance, and we also have this grenade thing. Now this isn’t how it will look – it will be like plasma ball – you’ll just have to trust me. And that blows holes in the terrain. And if you’re really good… “

At this point in the closed doors demo Murray apparently levelled all the scenery around him in an explosion of large chunky terrain. The effect was likened to terraforming, but Murray was hesitant to draw comparison to other, blocky building games.

“We’re not sure how much we want to say because I don’t want it to become the thing. Even showing this I’m nervous, because people will think, ‘Oh, right – it’s like Minecraft’, and then it becomes that. ‘It’s the Minecraft in space game!’

Murray explained that resource gather (or planet-wide terraforming destruction) is just another pillar of gameplay that No Man’s Sky offers, but doesn’t necessarily push. He wants players to create their own tales within the game, choosing to engage with features that they find interesting. Space pirates might never feel the need to blow up rocks and pick them up, and that’s ok. The game is never going to punish you for that it seems.

So again I’m left wondering what No Man’s Sky really is. Right now it sounds more like a massive, random playground to get lost in rather than a slightly focused experience that will take pleasure in guiding me. No Man’s Sky is out this year for PS4, landing on PC a little later.