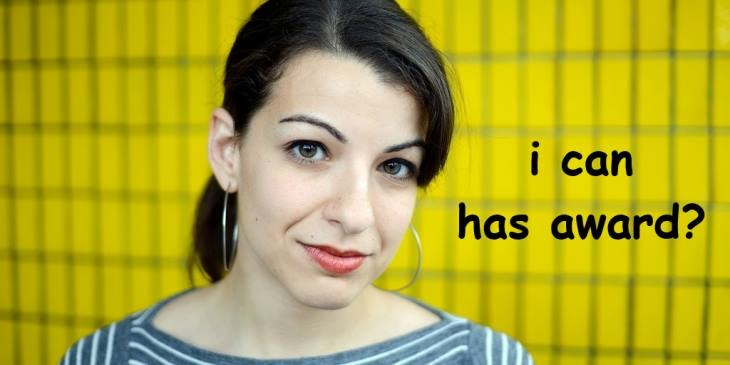 Every year at the Game Developers Conference they hand out awards for various things and one of the unique awards they hand out is the Ambassador Award which is a subjective award that is given to the person who has really helped gaming improve.

The Ambassador Award honors an individual or individuals who have helped the game industry advance to a better place, either through facilitating a better game community from within, or by reaching outside the industry to be an advocate for video games and help further our art.

Previous winners include relatively unknown people who have helped gamers whether we knew it or not or people who have dedicated their lives to helping others in the industry.

For example last year it was Chris Melissonis:

“Melissinos’ work as the creator and guest curator for the groundbreaking Smithsonian American Art Museum exhibition ‘The Art of Video Games,’ helped to cement the message of interactive entertainment as a form of modern culture.”

In 2012 it was a pair of lawyers, oddly enough, named Ken Doroshow and Paul M. Smith who

“led the legal team which resulted in the Court ruling that content-based restrictions on games are unconstitutional. The landmark ruling established First Amendment rights for those who create, develop, publish and sell video games, and is incredibly important to the past, present and future of video games as a creative medium.”

So yeah the first guy brought video game art right into the mainstream and is the person who got video games into the Smithsonian.

The lawyers saved countless developers and the industry from a barrage of legal cases that would have crippled their creativity and our enjoyment.

So it was quite a surprise that this years recipient is Anita Sarkeesian who’s claim to fame is as:

“ a media critic and the creator of Feminist Frequency, a video webseries that explores the representations of women in pop culture narratives. Her work focuses on deconstructing the stereotypes, patterns and tropes associated with women in popular culture as well as highlighting issues surrounding the targeted harassment of women in online and gaming spaces.”

Now I know it’s not just me but as important as some feel Anita’s work is I truly do not believe it is remotely as important as the two previous winners. And if you head over to the awards archives you can read about the other worthy winners who really did help gaming get to a better place.

Anita has simply turned the spotlight on a segment of the industry that all right-minded individuals already knew existed.

She didn’t improve anything, change anything or invent anything. Hell she hasn’t even protected anyone by being outspoken and antagonistic she has arguably made it worse for many female gamers who just want to game for fun.

Now don’t get me wrong. I think what she is doing is commendable, even if I don’t agree on the way she’s going about it. But to award her the ambassador prize simply smacks of political correctness and is another example of people being rewarded in the name of keeping the peace.

In my mind, GDC has always managed to avoid being the story and rather has focused on the industry and helping it grow. However that seems to be changing and the industry will be a worse of place for it.

“His work focuses on deconstructing the stereotypes, patterns and tropes associated with African American males in popular culture as well as highlighting issues surrounding the targeted harassment of Africans in online and gaming spaces.”

And yes before the Internet rodeo arrives, I am aware that there is a video out there where Anita states she is not a fan of videogames. Not really the ambassador I want for my industry.

TL;DR, She has a point and good on her for fighting for it but definitely doesn’t deserve an ambassador award.

Alison Rapp, an outspoken marketing specialist for Nintendo, has been fired after being ta…