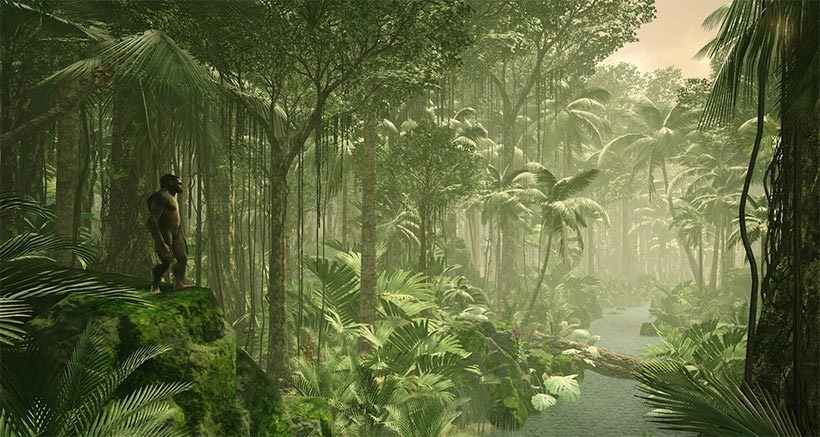 Patrice Desilets, along with Jade Raymond, were the public faces for Assassin’s Creed – back when it was an exciting new IP and not the stale bit of intermittently entertaining drudgery it’s become. Raymond’s gone off to start a support studio under EA, working on others’ games right now – but Desilets has started his own studio, Panache. Its first game, Ancestors, seems to share a bit of DNA with Assassin’s Creed, in that it looks in to the past.

But unlike the rather stabby Assassin’s Creed, Ancestors will try its best to focus on the bits of human history that weren’t all about bloodshed and war; things like the invention of tools, the discovery of penicillin, animal husbandry and other moments instrumental to the continuation of the human race. The game won’t discard the bloodshed that punctuates human history, but it won’t be the game’s focus.

And it starts with cavemen.

“Our ancestors back then weren’t that violent,” Desilets said in a rather extensive GameInformer feature. “They weren’t fighting each other. Cooperation and compassion are really part of the reason why we survived…There’s no evidence of war before the invention of agriculture on this planet. That doesn’t mean they didn’t exist, but we’ve never found any evidence of it. There’s not a lot of human beings on the planet, and once you first come across one, your first thought is not of killing them. It’s like, ‘Holy s*** there’s somebody else! Let’s try to help each other to survive because there’s not a lot of food and there’s a lot of beasts out there.'”

The game will be episodic in its narrative, but will allow players to toy with the game’s mechanics outside of the story, giving it the sort of emergent gameplay of survival games like Minecraft, Rust or DayZ.

“We’re not reinventing any wheels here,” Desilets says. “It’s an episodic, narrative-driven game where we leave you there with the toy in between episodes.” As a caveman, as an example, players might have to discover fire and how it works – and then use that knowledge to survive while waiting for the next episode.

“You’ll have the sequence of the amazing, huge bush fire that you have to flee with your family, and the only way to survive eventually is to turn around and use this fire,” he says. “You go back to your tribe and build a fire, and then it’s systemic. After this it’s your adventure until I come back and say, ‘There’s a new adventure for you.’ You could call it a mission or a level – we still haven’t decided what to call it – but each time we introduce a new feature that is laid with the story of humankind…We’re putting a lot of Hollywood stuff in, and then we leave you with a systemic, persistent open world where it becomes Day Z or Minecraft. But instead of blocky, it’s triple-A quality environments in this bubble.”

It all sounds rather ambitious, and I’m not sure it’ll happen, but it certainly sounds intriguing. The game is very early in development, with Desilets hoping he and Panache have something to show in 18 months time.