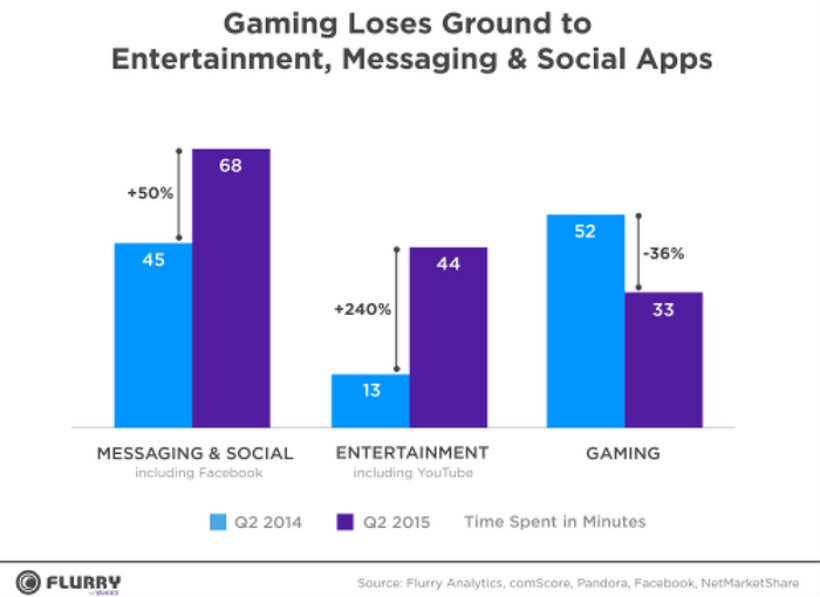 New research from Flurry in the US of A reveals that American smartphone usage has gone up, but the way those devices are used has changed:

although American smartphone usage has gone up by around 35 per cent since last year, with the average owner spending three hours and 40 minutes per day using their devices, the time spent playing games has almost halved. Last year, gaming accounted for 32 per cent of phone usage for US citizens, 52 minutes a day. In the last 12 months it’s fallen to just 15 per cent, or 33 minutes a day.

Instead of playing games, the chart suggest that people are messaging, using social media and consuming entertainment including watching videos. Perhaps it’s due to the rise of phones with ridiculously large screens, but it has become a whole lot easier to watch videos on our mobile phones than ever before. But that’s not the only reason for the shift.

According to Flurry, there are three main reasons why people aren’t playing as many games.

“Lack of new hits: Gaming is a hit driven industry and there hasn’t been a major new hit the past 6 to nine months. The major titles like Supercell’s Clash of Clans, King’s Candy Crush, and Machine Zone’s Game of War continue to dominate the top grossing charts and haven’t made room for a major new entrant.
“Users become the game: Millennials are shifting from playing games to watching others play games, creating a new category of entertainment called eSports. This summer, Fortune named eSports, the new Saturday morning cartoons for millennials. In fact, some of the most watched content on Tumblr is Minecraft videos created and curated by the passionate Minecraft community.
“Pay instead of play: Gamers are buying their way into games versus grinding their way through them. Gamers are spending more money than time to effectively beat games or secure better standings rather than working their way to the top. This explains the decline in time spent and the major rise in in-app purchases, as Apple saw a record $1.7B in AppStore sales in July.”

I rarely if ever use my phone for gaming, choosing instead to use my tablet. I just find it to be a much more enjoyable experience that way. Perhaps that’s also the reason for the shift as more people have multiple mobile devices in the home. Or maybe it’s just about time for the next big mobile gaming hit. It should be noted that these stats were gathered before the launch of Fallout Shelter, which probably changed this observation quite a bit.