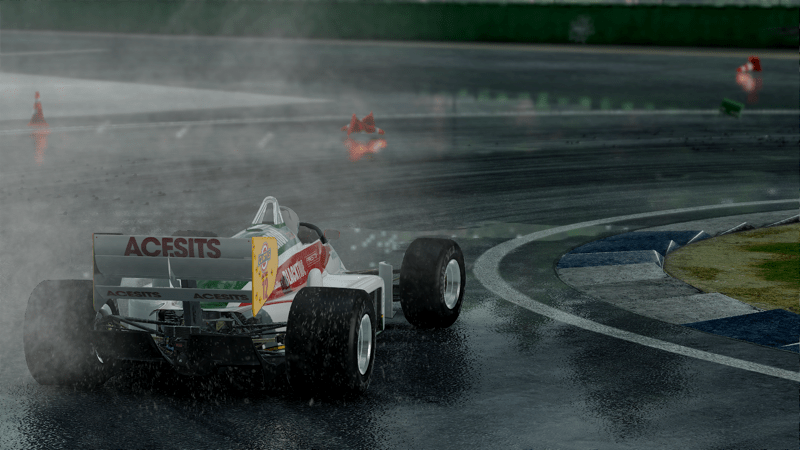 Project Cars is finally seeing the light of day this week, bringing a long, winding development period to a resounding close. The game looks absolutely breathtaking, allowing you to tweak your visual experience on consoles for the first time in the hopes of a smoother experience. And it seems like that’s a good thing, considering a beating storm brings the game to a grinding halt.

The guys over at Digital Foundry have posted their initial technical thoughts on the performance of Project Cars, and it starts off relatively well. The game isn’t locked at 60FPS, but for the most part it manages to stay pretty darn close on both Xbox One and PS4. Things take a slight dip when there are numerous cars being rendered on screen – which just incentivises you to stay leader of the pack.

Inevitably, the initial break of cars cues some of the lower readings on record, especially when starting at 20th in the grid. However, the ascent to pole position brings with it a reduction in the regularity of sub-60fps dips, and the knock-on effect is that it leaves the front-runner with the smoothest playback overall.

One of Project Cars crowning features is the dynamic weather system that is present during every race. A sunny, dry spell could quickly turn into a hazardous, torrential downpour in a matter of minutes – which won’t only make corners trickier but also weigh heavily down on performance. Heavy rain effects bring with them a huge knock on the frame rate, clawing it down close to the 30FPS region.

The greater the downpour, the bigger the drop from 60fps, and neither gets off lightly once the switch happens mid-race. With no other driver in sight, a cruise around a soaked Brands Hatch circuit has the final bends run at 45fps on Xbox One, while PS4 takes the lower end of 50fps. And once the pit-stop and stands are in view, this number goes even lower still, where both drop to the 40-50fps range, while the cadence of tearing becomes increasingly more aggressive.

It seems that a CPU bottleneck is to blame in this case, with the differences between platforms becoming blurred. It also seems that tweaking the game’s visual settings has near to no impact on the matter – which means you might as well just keep everything turned on and fight out the weather.

Alas, while Slightly Mad Studios offers a bevy of post effects toggles, the impact these actually have on the game’s performance is fairly minimal; our test above shows the boost averages at 2fps once all options are disabled. The sacrifice isn’t worthwhile in our view; eye-catching extras like god rays, bloom, and screen-space effects such as water droplets add hugely to the impact of the game’s weather, and the gains otherwise are small.

It’s also really important to note that weather effects are having a similar effect on PC performance as well. Polish website PCLab posted their own benchmark tests for the visual beauty, running on a variety of different graphics cards. The benchmarks at Ultra with around 20 opponents under clear skies were impressive, with the GTX 980 putting out above 80FPS. As soon as the rain hits though, this number halves – which is abhorrent in any situation.

Both PC and consoles manage to keep the game well within playable territory, but it’s the large jumps that are often the most jarring. Losing around 20 frames (or double that) is extremely noticeable, and becomes even worse when coupled with terrible screen tearing. Since it’s an issue across all three platforms, it could be a leak of some kind that Slight Mad Studios could plug with a patch. Otherwise you’ll be hoping for blue skies more than every racer that went corner to corner with Schumacher.