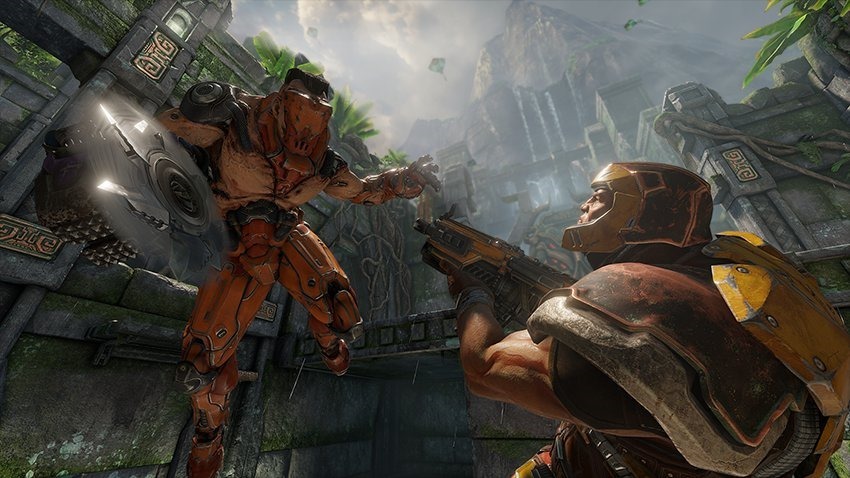 Quake Champions is actually a fun-as-hell arena shooter. Even though it takes the modern “hero” bits you’ll find in many shooters, it lays them over the skeleton of a classic, old-school skill-based shooter experience.

“Gameplay is breakneck fast, and it’s easy to see why Champions is being kept as a PC exclusive for the time being. Its shooting is tuned for the fast movement only a mouse can provide, making players easy targets if they’re not bouncing around and swinging the camera wildly to keep foes in sight. It’s a pace that’s unsurprisingly difficult to keep up with at the start (especially if you haven’t been sticking with legacy titles like Quake Live), but it’s one that’s inviting to learn. Quake Champions only really needs you to point and shoot – but it’s emphasis on movement and precision make even this simple task something that you really want to sink your teeth into.”

The biggest problem with the game, at least from a South African perspective, is that the local servers are perpetually empty. The lack of proximity to fuller servers means that we’re always at a disadvantage, usually to the tune of 200ms. Because we always have, we can learn to overcome the latency gulf – but practising the game in its current form is a tricky proposition. Thankfully, the game will be getting bots to help with that. In a video, technical director John Dean said that bots would be coming to the game to help players hone their skills. While there’s no word on whether that means we’ll see an offline mode or not, it should give SA players a little more to do without putting their hands into their heads and crying, angry to tears over the lag.

The bots will apparently have sliding difficulty. At their easiest, they’ll avoid big pickups completely, letting players get some time in with the game’s most dangerous modifiers. At all levels, the bots will do their best to defer to their human teammates, avoiding those pickups if it seems that humans are aiming for them.

When they launch, bots won’t be able to use Champion abilities, but that feature will be coming in a second phase. Check it out: