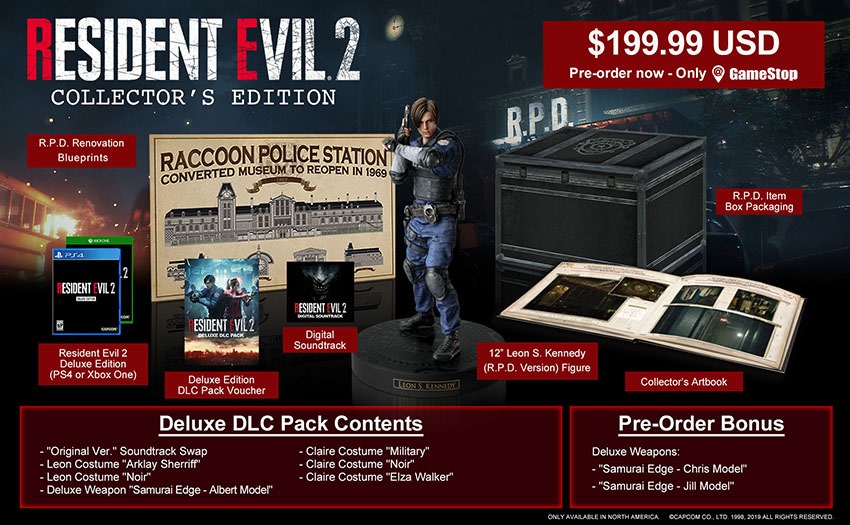 I mean sure, you could buy a regular version of a video game. Or, and hear me out here, you could buy a version that has a bunch of weird physical extras and a sort of decent statue that sits on your shelf and slowly gathers dust while the universe edges ever closer to entropy and DON’T LOOK AT ME LIKE THAT BORDERLANDS 2 MARCUS BOBBLE-HEAD!

Anyway, feel like grabbing a fancy Resident Evil 2 Remake collector’s edition? Too bad then, because you can’t have this version. The Resident Evil 2 Remake deluxe edition may look spanktastic, but it’ll be a ‘Murican exclusive to their GameStop and EB Games shops. So unless you feel like ponying up for the video game mule to smuggle this version across the border (We’re going to need a LOT of lubricated condoms for this one), here’s a look at what you definitely can’t have. Thanks VG247.

Give Leon and Claire a new look or a blast from the past with unique costumes:

Ensure the undead stay undead with a special weapon

And bring on the nostalgia with classic tunes:

If you’re reading this and you do happen to live within earshot of a Gamestop or EB Games then know this A) I hate you and B) it’ll cost you $199 when it arrives next year on January 25.