Home Gaming Scalebound could be the “Game of All-Time” 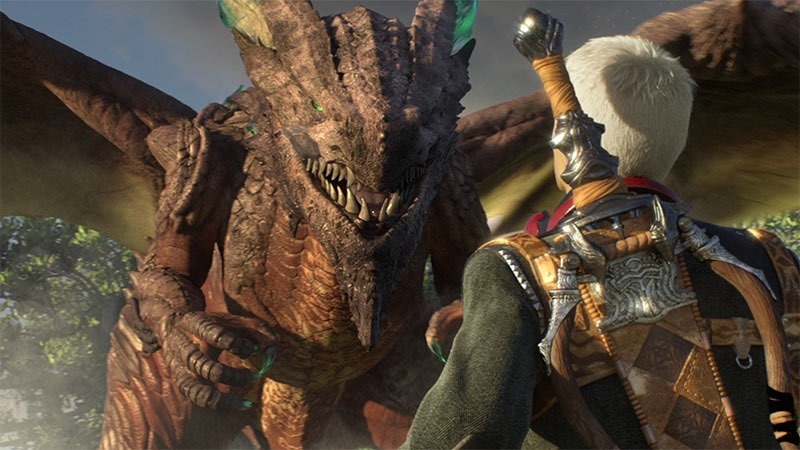 I really like the Xbox’s current management. Unlike the previous head – who came across as little more than a suit with a face- Don Mattrick, division and studio head Phil Spencer and creative director Ken Lobb come across as being enthusiastic, engaging, and dare I say, honest. That doesn’t mean they’re quick to shy away from hyperbole. Speaking on The Inner Circle Podcast, Lobb said that Scalebound has the potential to be the “Game of All-Time.”

There’s a dearth of concrete information on the game, developed by Bayonetta creators Platinum Games. Lobb’s not exactly forthcoming on the matter either, though is willing to offer more of that delicious hyperbole.

Lobb added that the game’s name is  intentional. “Scale: they build crazy, gigantic things.” It’s been suggested that Scalebound could be Microsoft’s attempt to take a stab at the monster Hunter market, though Lobb’s put paid that, saying that Capcom’s Japanese sales champion is “weird and grindy,” a statement I can only agree with. With development being handled by Platinum, I can only hope that it’ll be incredible. For a long time, I was convinced that the company could do no wrong – until they developed that Legend of Korra game, that is.

Scalebound is an Xbox One exclusive, and was announced as such at last year’s E3. According to Platinum’s Hideki Kamiya, it’ll be a little different to Platinum’s usual fare.

“The games that I’ve worked on in the past have been more on the pure action side. They really tested your skills, your quick reflexes and you’re advanced mastery. It’s safe to say that you either got that and went for it, or not. But it was really meant for those kind of players,” Kamiya said at a roundtable after E3 last year.  “For this game though, for Scalebound – of course taking all the things that we have learned and our battle systems and the know-how from all the accumulated titles that we have worked on, we will take that and reflect or integrate it into this new game.

“But really the focus, the core concept of the game is we wanna show off this large, epic-scale battle taking place with these large monsters. That’s where it really all begins. It’s unlike any action-oriented game that we’ve made. On top of that the setting is more in the fantasy realm. The subject matter, the dragons – I’m hoping that will attract a wider audience, rather than just the pure action gamers.

“Bayonetta was a challenge for me while staying in the same genre. Seven years before I made Bayonetta, Devil May Cry was born. It was a challenge to me to see what I had learned in that timeframe, and put it into what I could do now.

“With Scalebound, it’s really, on a higher level, a game unlike anything I’ve ever made before and also anything that Platinum Games as a studio has made before. It is in a sense starting from point zero. To me that is really exciting and really fun, to see how this is all gonna come together.”

Platinum’s games tend to attract a niche audience, and I’m sure both Platinum and Microsoft are hoping this one will gain a little more mainstream traction. Whether or not that happens, it is nice to see Microsoft doubling down on exclusives.