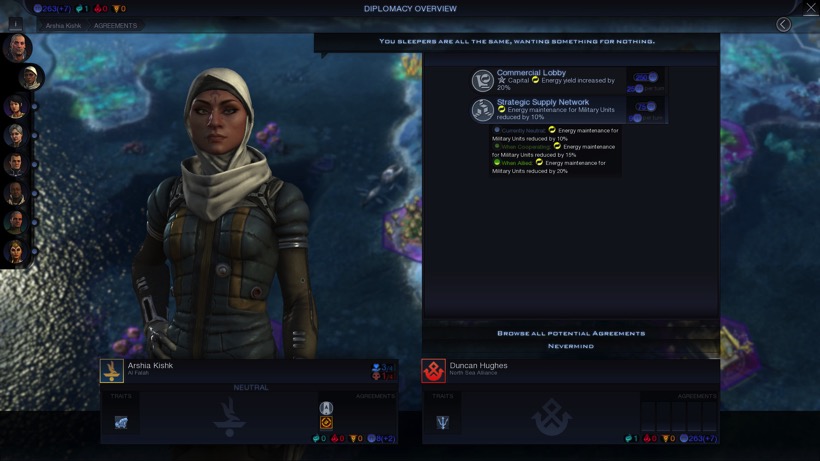 Civilization has always been about exploring your preferred way of ruling the world. Are you a war monger who takes over the entire planet by force, or do you prefer economic and social means? Diplomacy should have been a big part of this, but was largely ignored in previous games. The Rising Tide expansion for Civilization: Beyond Earth seeks to rectify that, and it sounds pretty well done.

Here is an hour-long video recorded from a live stream. It seems that Will Miller and I have a similar approach to diplomacy, preferring high walls and powerful culture. However, the military might and war score certainly change things quite a bit – it’s not just about fear and respect, but also about perks and how many units you sacrifice to boost your war effort.

It’s good to see that the relationships between civilizations as personified by their leaders will be a much more nuanced experience. It’s intriguing to see the way that various perks could totally change the path of the game – I still think that I’ll pursue a primarily culture and trade-based expansion, but it will be nice to see the threats around me and assess my ability to defend myself.

Rising Tide is coming out in the next few months and might just make me pour even more hours into Civilization. The time sink is never ending, and yet I absolutely adore it even now. It’s one of my “I’ll just play this until I figure out what to play” games, and I have lost far too many weekends taking over the (new) world.