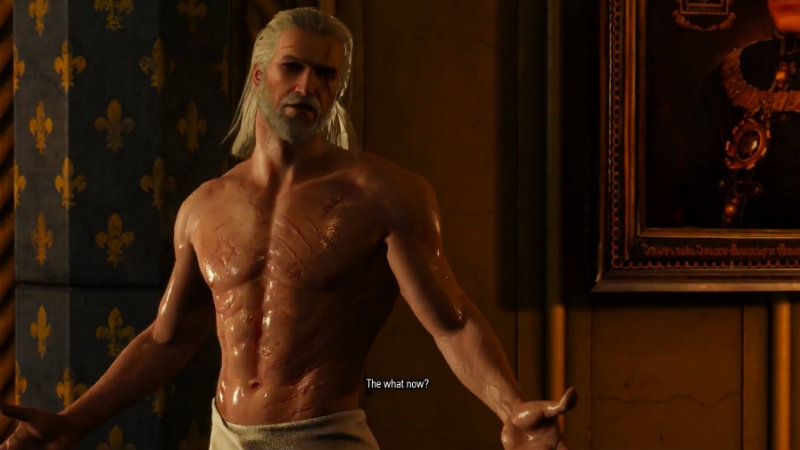 No, it’s not all about sex in games. But, sometimes games use sexuality in a realistic way – to show an intimate connection or possible alliances. This isn’t Game of Thrones style sex for sex’s sake gratuity; The Witcher shows sex for a reason. And lots of it.

According to the Guardian, the game starts off with a sex scene, but this one done on purpose. Senior game designer Damien Monhier explains:

People might think we’re putting sex into the opening scene for no good reason. No, no, no. We are establishing that your character was intimate with this woman recently in order to plant in your mind that, at very least, he must enjoy her company. […] Through sex we have shown that this is a person who Geralt would be compelled to chase after if she went missing

A scene of sex followed by flirtation and intimacy between Geralt and Yennefer? It makes sense if you know about the story and the lore, plus it’s great that the team add context to why you’d chase after her if you don’t already know about their relationship. Considering how vast the open world is in The Witcher 3, the sex scenes give more urgency to the various activities.

For example, we tell the player that Geralt’s lover Yennefer was recently seen in the area and that you should look for clues. This framing gives the player permission to take on other quests while still feeling a vague pressure to continue the search. It’s a writing challenge that is almost unique to video games.
[…] It’s been a massive challenge. Before, players would follow the story as in a novel or television series, moving from A to B to C. Now players can go A-D-B and we must ensue that the story makes sense regardless of the order in which it’s approached. It’s incredibly complicated.

Added to the complication is the fact that player choices can alter the world around them. No wonder the game keeps getting delayed – that’s a lot of stuff to test and ensure everything works regardless of how players approach it.

The team at CD Projekt Red did 16 hours of sex scene motion capture for The Witcher 3. Yes, that’s a lot of bumping and grinding, but it also means that we should see a Geralt who is true to his character from the books, one who loves the women he gets close to and becomes intimate with them. It isn’t a cheap excuse for sexuality like in some other games – while there may be ulterior motives to the sexuality (on either side of the coin), it feels distinctly human.