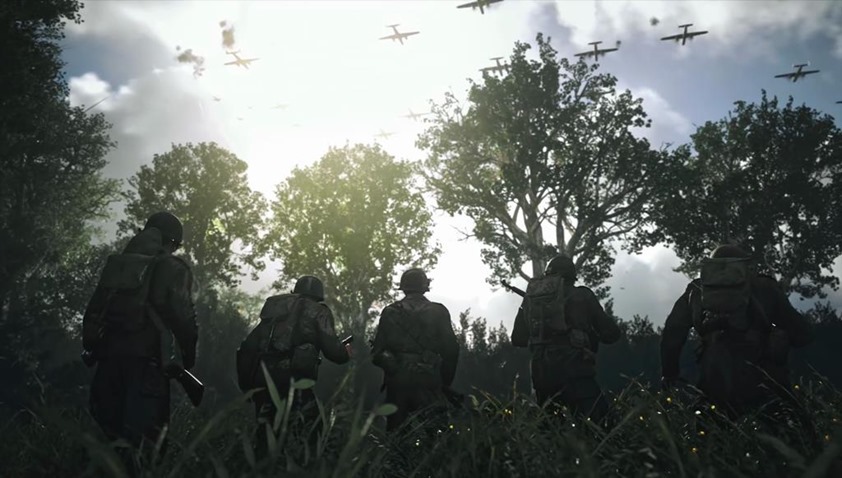 I like to think that as a species, we enjoy romanticising the past. Especially if said past had a touch of war in it. World War Two however, still feels like a recent piece of history that doesn’t need a touch of embellishment to document properly. The greatest (and most terrible) war ever fought on our planet, this was a global conflict that very much was a tale of good vs evil. Of how so many nations marched under the Axis banner of a madman, leaving the rest of civilisation to arm up and hold the line.

It’s also the theme of Call of Duty this year, as developer Sledgehammer games has taken the franchise back to its gritty roots. The forests of Verdunn, the beaches of Normandy and the ruins of Europe. There’s a story to be told there, one that shaped human history and that we’re still uncovering to this day. “The second world war goes beyond all boundaries in every category,” historian Martin K.A Morgan said in a new mini-documentary describing the tone of Call of Duty: WW2. We see more nations involved in a single conflict, we have seen casualties higher than ever before. Just a generation before, at the end of the first World War, the Great War, they didn’t call it World War One because they didn’t expect anything like this to ever happen again. And a generation later, something happens that’s even bigger and even worse in so many ways.

World War Two may have seen a technological jump forwards compared to the battles that happened decades earlier, but it was still a dirty war that had soldiers relying on something that a machine could never replace. Each other. “Every part of this game has been researched and nuanced and studied and scanned and photographed,” Sledgehammer games studio head Glen Schofield said. We really really tried to get the respect and the details right. Brotherhood, camaraderie, the guy next to me. That became the theme for our game.

“For story, it weaves in and out of real historical events. We’ve gone to great pains to recreate those authentic battles,”Creative Director Bret Robbins added.

One of the biggest things we wanted to get across was a sense of camaraderie. Hopefully players will walk away from this story feeling like they really know these guys, and they care about them. By creating a very believable environment, it allows the player to slip into this world.

Visually however? Sledgehammer wanted to convey a sense of what they referred to as “emotionally dark”. “The vision for the art direction, we call dark and beautiful,” art director Joe Salud said.

It was emotionally dark, visually beautiful. More than being just cool and pretty, it’s about getting people to have deeper emotional reactions to the game.

Call of Duty: WW2 is out on November 3, just in time for me to fight my own battle of the bulge after winter hibernation ends.