When Matt Stone and Trey Parker set out to make a South Park RPG, their main guideline was that it had to look and feel like the TV show. It wasn’t enough to encounter familiar characters; players had to feel as though they were navigating that world itself. The Stick of Truth is fully successful in that regard. 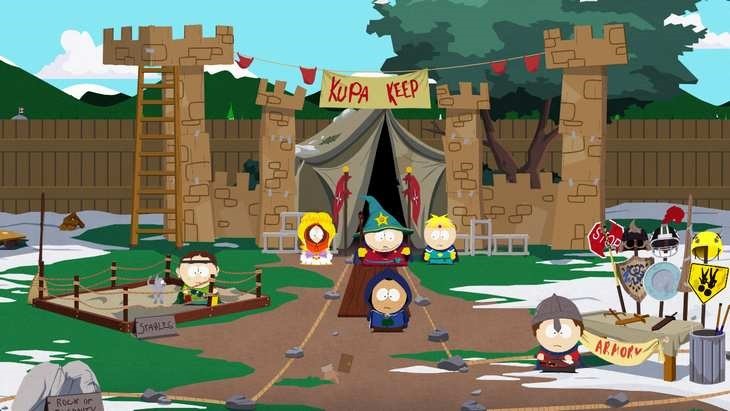 Players take on the role of "the new kid", a 9-year-old boy who has just moved to South Park and has a mysterious past. When designing your character, there are a ton of options. These will change your interactions with other players – everything from your skin tone to class choice is fodder for hilarious jokes from Cartman. On one preview play through, we played with a spray tan, ginger hair and a cow t-shirt, prompting Cartman to ask if we were Kyle’s mom; when I played with black skin, a huge afro and hipster clothes, the game even changed the parents’ style to match.

There are four classes to choose from: Fighter, Mage, Thief and Jew. As you might expect, each gets unique traits and abilities. The first time I saw Stars of David fly out of a damaged enemy due to a special attack from the Jew class I nearly wet myself laughing.

While combat is turn-based, it’s not just a matter of "press A to win". Players can select actions from a range of options in their attack wheel. Actions will need to vary based on enemy stances, armour or skills. Additionally, when attacked, players have the opportunity to block – if all attacks are successfully blocked, the player can counter attack. Combat is very fast and certain abilities have the possibility of harming the player as much as the enemy – what would else you expect when Butters tries to play with hammers? 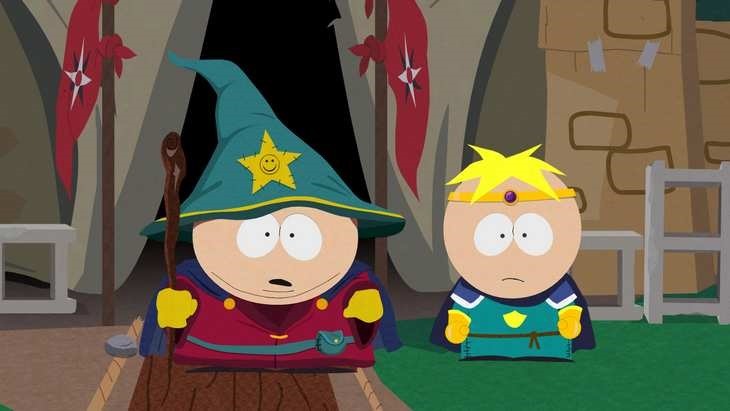 In fact, the combat in the game is very difficult and expects a high degree of strategy from the player. Sure, you can successfully take on more difficult enemies early on in the game, but you will need to use your healing items, special attacks and abilities in just the right way. Combat adds a deeper level to the game, taking it beyond an opportunity to explore South Park in an interactive adventure – it is truly an impressive RPG.

Despite being 2D like the TV show, the game offers a huge open world the explore. Sure, I was only able to explore the town of South Park, but there was more than enough to see. As long as you stay on the side walks or use pedestrian crossings, you can go anywhere in the town. In this way, the game feels like a fully open-world game, without breaking from the 2D background design. Each house can be entered and explored, as can all the shops. Upon checking out the one business, I was treated to Chef singing "Simultaneous Loving" in the background while looting the items available. In the next store, "Taco Flavoured Kisses" was on the radio as I spoke to different characters and found a side quest. 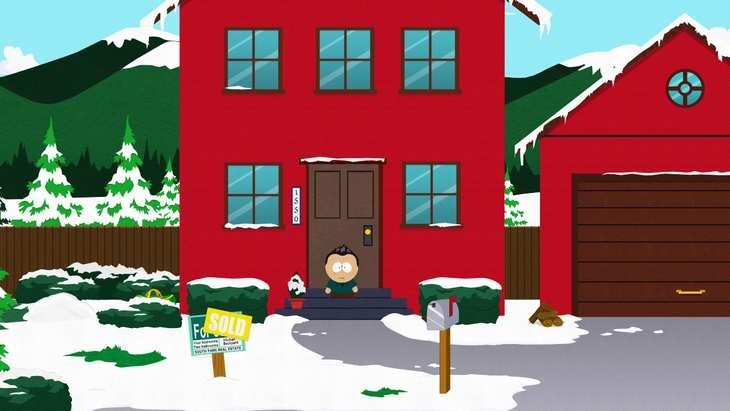 Within each area, there is some degree of platforming as you move up ladders and across obstacles. You can use your environment to your advantage in combat, taking out enemies with a variety of objects rather than needing to fight your way through each and every one. This small amount of puzzle solving varies the gameplay and will appeal to those who prefer to out think their opponents rather than relying purely on brute strength.

The Stick of Truth has a pseudo-Facebook system that allows you to make friends with tons of characters in South Park. This brought back memories of Suikoden as I tried to collect all the characters as friends. Some people require you to complete extra missions, or have a certain number of friends before they will interact with you. Checking your friend-feed can give advice on quests, or just offer hilarious commentary as you go. Friends can also provide you with side quests or random funny dialogue. In this way, interacting with every person you come across becomes interesting, enjoyable and rewarding. 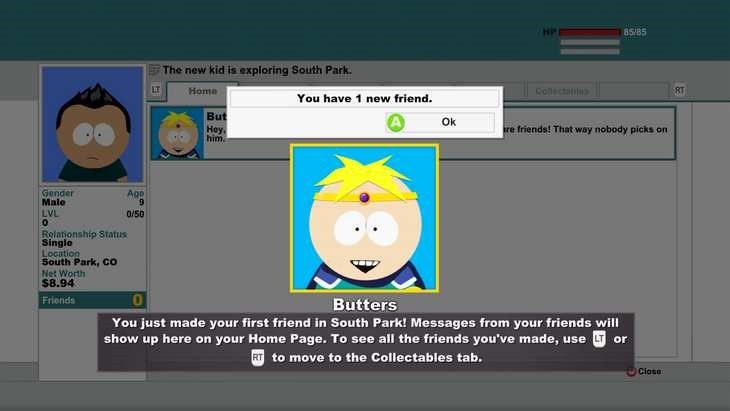 The aesthetic design is fully in line with the TV show and franchise. The character models are like those in the show, and even the walking animations are the same. Beat up an enemy and they’ll whimper as they limp off screen. Each enemy is unique and even has funny and relevant names. Despite the fairly simple design that South Park is known for, nothing feels repetitive or meaningless.

Truly, the core of the game is laughter. Whether it’s from discovering weird South Park themed Easter eggs, or the hilarious character interactions, or even the hilarious in-joke side missions, the whole experience makes the game feel like the series has come to life. My hour with the game was far too brief – there was so much to explore and discover. I honestly can’t wait to play the full game.