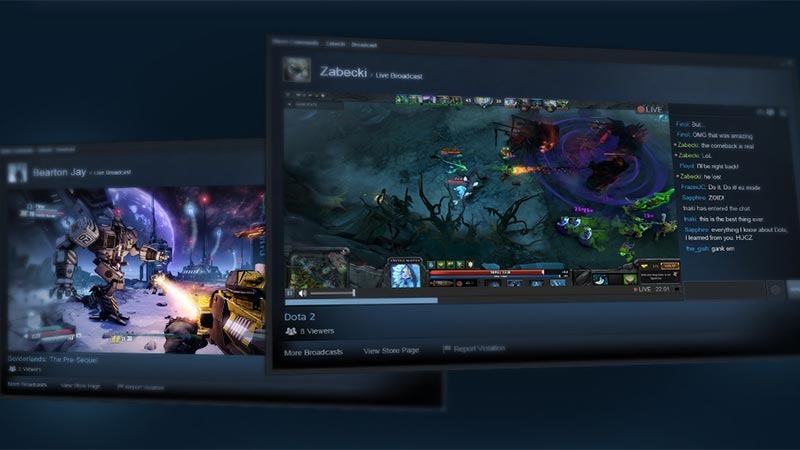 Streaming is big business. It’s become one of the most prolific phenomenon in all of games. Amazon recently purchased Twitch – which reports over 60 million visitors every month – for just under a billion dollars. The PlayStation 4 was shipped with built-in Twitch streaming, and the Xbox One got it patched in not very long after that.  Valve’s jumping on before the bandwagon gets too full, allowing Steam users to broadcast and watch gameplay right from their Steam clients.

Every Steam user that has purchased any game is now able to stream audio and video from any game on the service to anyone on the internet. Users are able to choose who can watch; people on their friends list or the entire internet. It’s built right in to the client, with “no game ownership [on the viewer side], special fees, or additional apps required.”

Streamers don’t even have to explicitly stream. As Valve explains in its broadcasting FAQ, “if your settings allow your game to be watched, then you start broadcasting when someone starts watching” by selecting the “Watch Game” option from their friends list menu. If privacy is a concern and you don’t want people to watch you playing games, you have the option of setting privacy settings so people won’t be able to see your pigeon dating in Hatoful Boyfriend unless you really, really want them to.

Players are able to view the streams through the Steam client, or a Web browser, with Chrome and Safari being the only ones that have received official support from Valve. If you choose to set your stream to public, it’ll be listed on a new community broadcast hub, Viewers can also interact with the broadcasters through a chat window on the side of the stream – much like Twitch.

As with  any other similar service, there’s a pretty strict set of rules broadcasters will have adhere to, which includes not engaging in  “any discussion of piracy” or “cheating, hacking, game exploits” or “posted copyright material such as magazine scans.”

And like many of these services, it’ll unfortunately be close to useless for a majority of South Africans – at least when it comes to broadcasting. Thanks to our dismal upload speeds, we’ll have to be happy watching others’ streams instead of broadcasting our own.