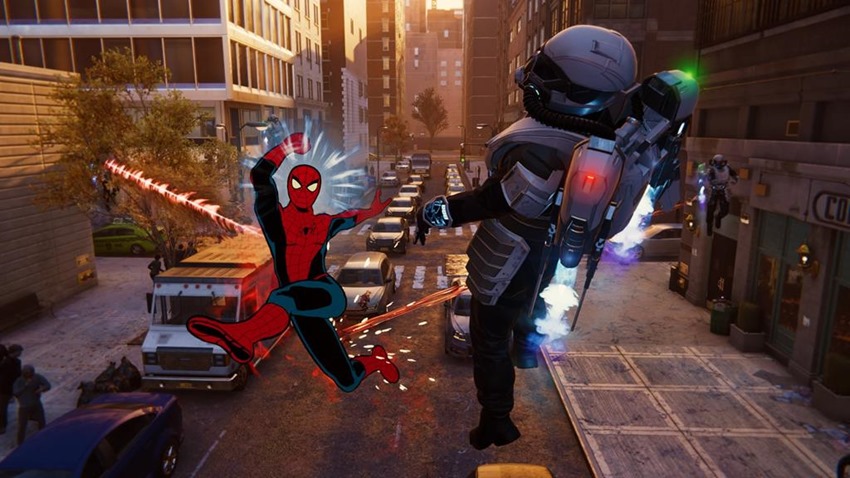 Some spandex, a pair of web-shooters and an overwhelming sense of responsibility. That’s all you need to be Spider-Man. Well, that and you better hope that you don’t die when the surviving spiders you shoved in a microwave unleash their arachnid fury on you. Over the years, Spider-Man has always been a fashionable vigilante.

Times may change and new costumes may come and go, but that original red and blue suit of his has stood the test of time. That doesn’t mean that Spider-Man hasn’t worn some great outfits throughout his long and storied history, something which developer Insomniac added to their game as a bonus for fans.

There are a lot of suits to collect in Marvel’s Spider-Man, and they all add something special to the evolving mythos of the friendly neighborhood Spider-Man. Which ten are the best though, if you were looking for an arbitrary and heavily opinionated list to read through? Easily the ten below, although MASSIVE SPOILER warning for the final suit below. 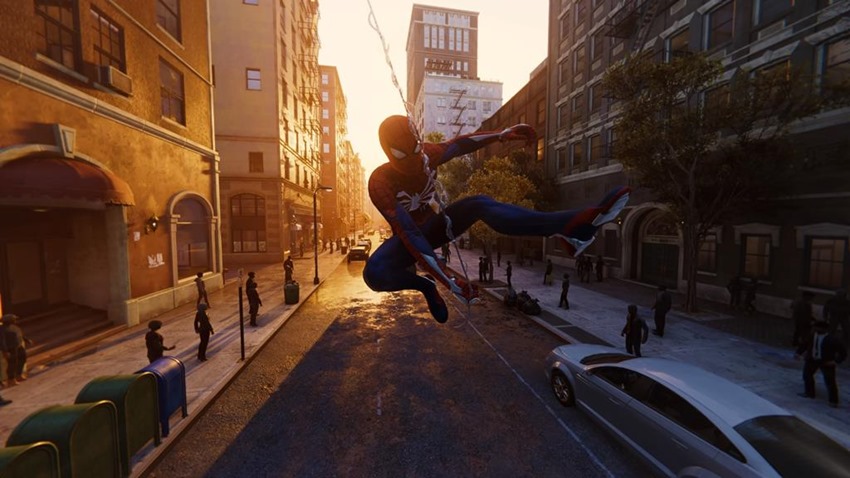 You know what’s great about this costume? It’s that it happens to be Insomniac’s statement of the hero that they envision Spider-Man to be. Sure, the in-game explanation for the huge spider-symbol may be that it uses colour to subtly throw enemies off balance, but it’s a message as to who the man is behind the cowl.

No hiding in the shadows (well, most of the time), just a straight-up New York resident who isn’t afraid to step into the spotlight and let criminals know exactly who it is that they’re fighting. Combined with the cunning use of webbed materials and the raised textures on the Advanced Suit, and this particular costume is as stunning as it is memorable. 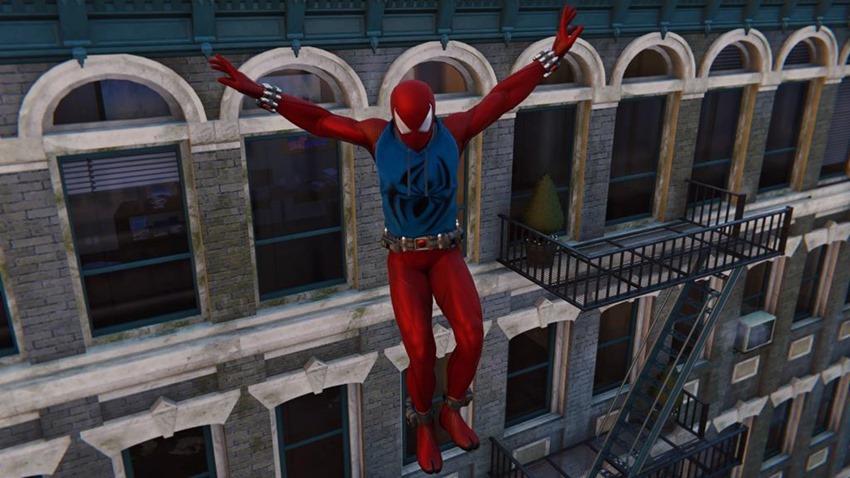 I have a confession to make: I always hated the Scarlet Spider suit. Introduced during the much-maligned Clone Saga, Ben Reilly’s outfit was the equivalent of a crowd at a Cape Town branch of Woolworths after a morning jog: Active wear (active wear active wear) with a hoodie thrown on top of it. It was just…urrngghhh.

And then Insomniac came along, and added some small details to the outfit that changed my opinion of it entirely. Just seeing more dedicated seam lines, textures and a style that was lacking from the original costume makes a world of difference. It’s still so 1990s, but it’s a relic of the past that finally looks great now. 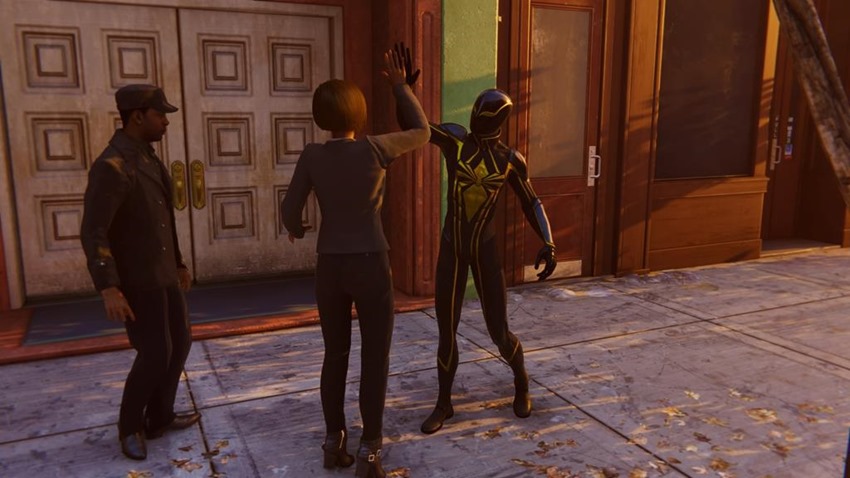 Alessandro has a massive love for Spider-Man’s classic armoured suit, but since he also regularly tells me that Final Fantasy 8 can get stuffed it’s only fair to repay the favour in kind and claim that the most 90s comic book suit of all time can go take a long walk off a short pier. That being said, Spider-Man’s MK II suit is a work of beauty.

Originally designed as a bulletproof failsafe when he temporarily lost his Spider-sense, the MK II armoured suit makes sense. It has armour that doesn’t hinder Spider-Man’s movements, it’s sleek and the yellow spider symbol has a fantastic pop to it. Stylish. 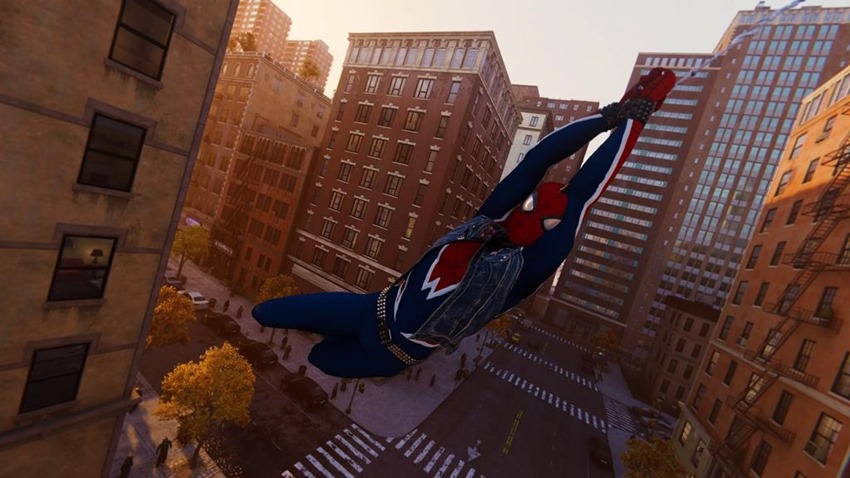 I have way too much love for this suit. It’s technically just a new costume with a punk rock denim jacket thrown over it, but it screams rebellious attitude and anti-authoritarianism. All ideologies that I have a healthy love of. The devil is in the details though, and if you take a closer gander at the vest, you might notice a few badges detailing a life of fighting the man and helping for the greater good.

Also, this is the only Spider-Man who wears Converse All Stars, the greatest shoes of all time. Naturally, it’s a winner in my book. 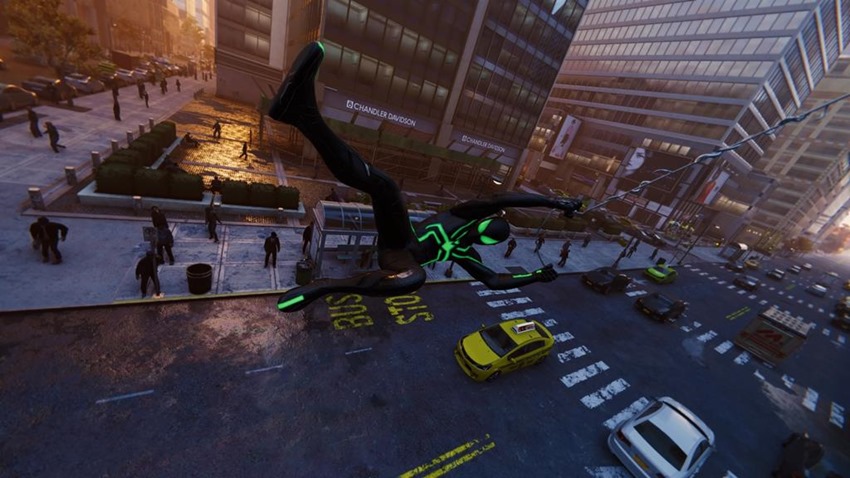 Spider-Man, but what if he was in the Tron movies? You’d get the Big Time suit then, which strips Spider-Man’s threads back to a basic black but adds in just enough highlights to make it stand out. Which is kind of a paradox, considering how this costume was designed to be a stealth suit originally. 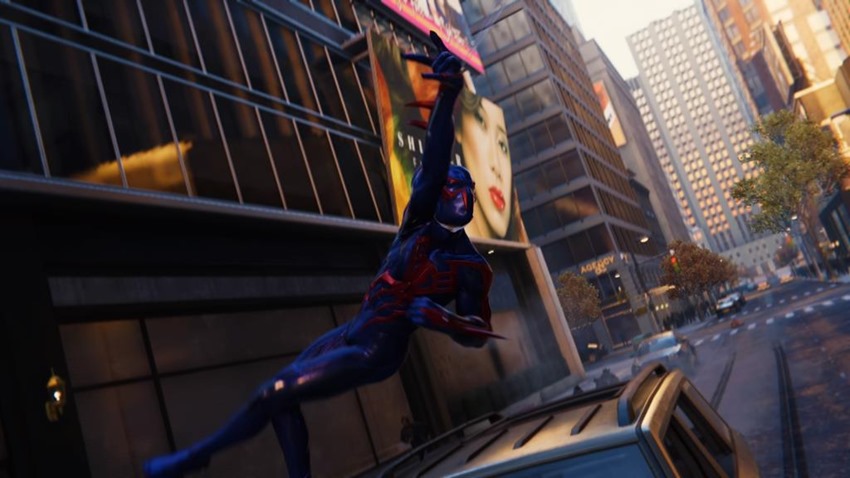 The Spider-Man costume of 2099 shouldn’t work, and yet it somehow does. You’ve got a clash of colours, the visibility of this suit must be hell and the web cape is weird. Still, I adore this suit and how it feels futuristic despite being designed several decades old already. That’s a foresight that you don’t often see in comic books, but when a creator nails it, they create a lasting impression that sticks around for plenty of years. 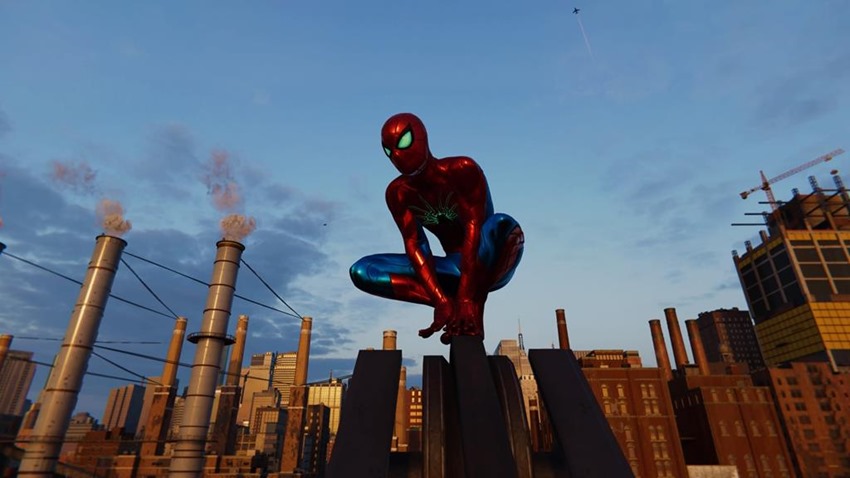 Peter Parker’s financial situation is usually more dire than that of a vegan being air-dropped into an abattoir. What if Spider-Man didn’t just have the cash to elevate his status in life, but also the resources to put together a costume that would give him a technological edge over his adversaries? You’d have the Mark IV armoured suit then.

With enough technology beneath the threads to give Tony Stark a wet dream, the Mark IV armour had everything. Upgrades, new technology and experimental camouflage capabilities enabled Spider-Man to pull the most amazing feats possible. It also looked expensive, an ostentatious upgrade that was humming with shiny new toys and gadgets to help save the world on any given day. The very height of Peter Parker’s imagination and responsibility, the Mark IV armour looked and acted the part that it needed to serve before it was eventually destroyed in battle. 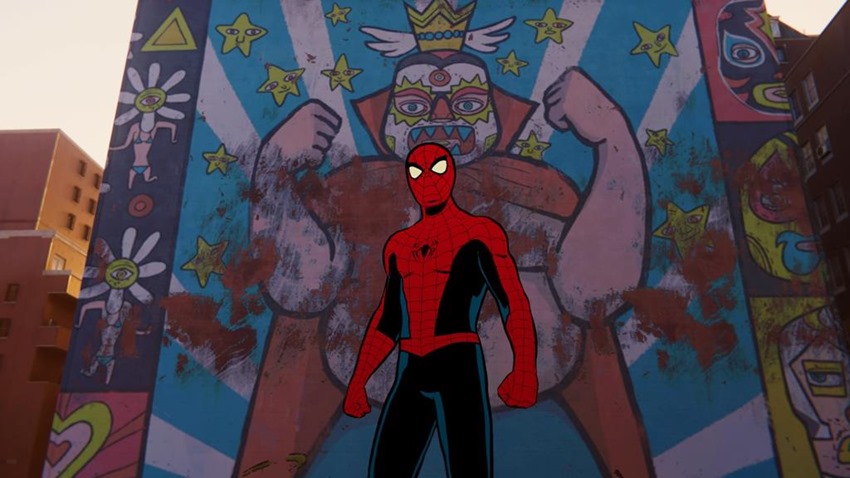 Marvel’s Spider-Man is a great looking game, one that uses a more photo-realistic palette to visualise its story. Switching to a cel-shaded costume that wouldn’t look out of place in a Steve Ditko-drawn issue of Amazing Spider-Man? It feels kind of…odd, and yet it also feels kind of right. Simple, back to basics stuff that resonates with an appreciation of the past. 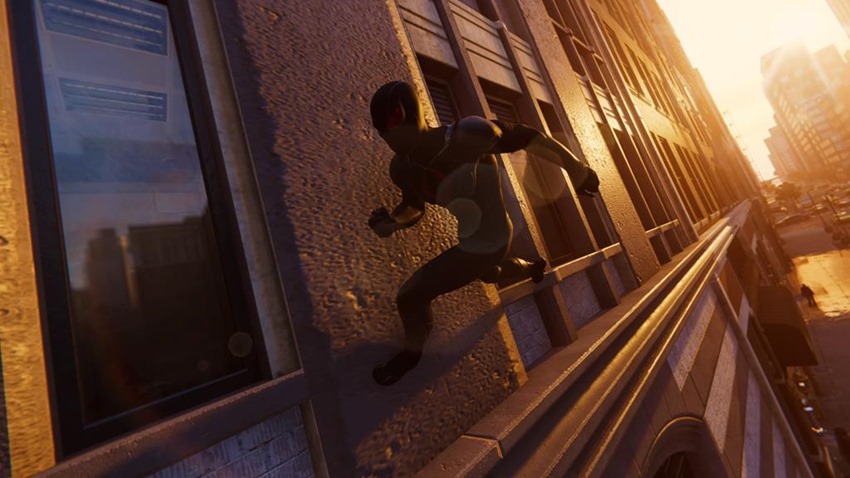 It’s a good thing that Spider-Man isn’t a burglar, because no vault on the planet would be safe from Parker’s skills and intelligence if he ever applied himself to a life of crime. While it’s an interesting thought, the Black Cat’s gift to Spider-Man is an interesting tease of the life that could have been, a less-complex skin-tight outfit that maximises stealth and minimises personal branding. Sometimes, less definitely is more. 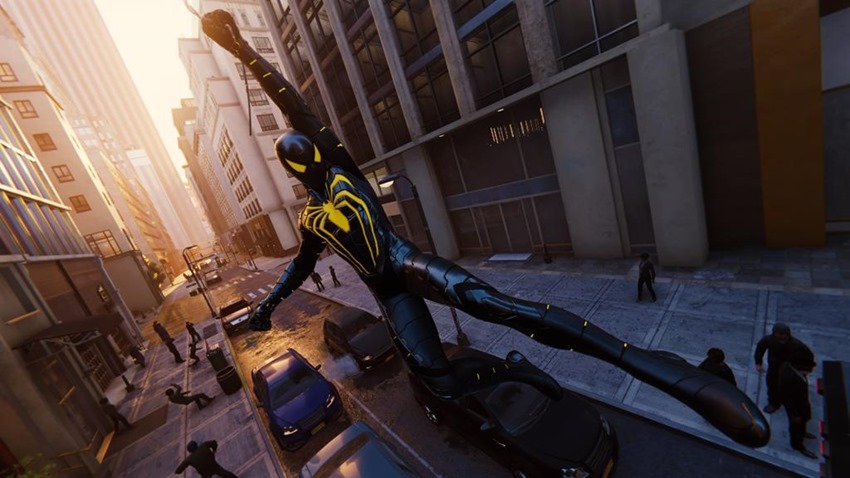 While Insomniac put plenty of classic and modern Spider-Man costumes in their game, having a chance to design something new must have been a treat. The end result was the ultimate anti-Ock suit, a costume that was designed to provide as much protection as possible while still giving Parker his full range of motion. It’s a striking suit, one that looks easy to design at first glance but actually contains dozens upon dozens of small details that have to be seen to be believed.

It’s a perfect use of colour that doesn’t sacrifice the character of Spider-Man, preserving the new direction that Insomniac dreamed up for the webhead and cementing their role as the developer of the finest Spider-Man game ever. Highest of fives, to Insomniac’s art team for creating one of the best alternative Spider-Man costumes of all time as well then.