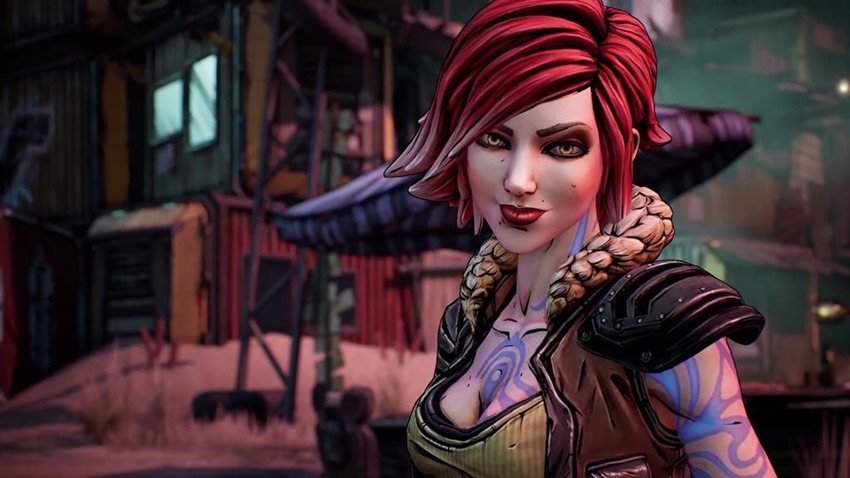 Guns! Alien artifacts! Claptrap. Borderlands 3 is a thing, and I’m kind of excited for the journey it promises to be: Namely a scenic romp through hostile territory while collecting plenty of guns, using them to shoot bandits in the face and listening to dubstep. Yes, these are things that appeal to me. Last night’s super-awkward reveal event didn’t show too much off about Borderlands 3, but after scrubbing through the trailer, plenty of new details popped up like warts on a Skag.

Or Claptrap at a pizza party for one. Man I still feel bad about that. So the day is young, my hype is fresh and it’s time to wax lyrical about what we can probably expect to see in the threequel!

One of the main villains is a Siren 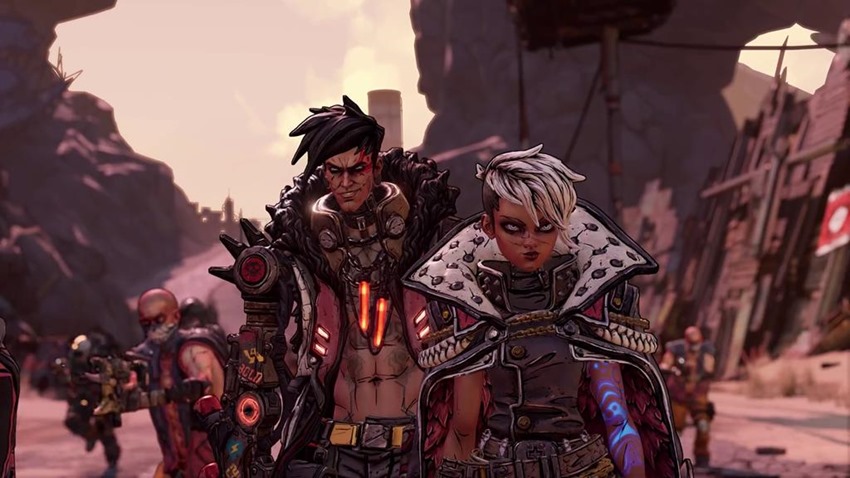 See that gruesome twosome above? Thanks to wanted posters being seen throughout the trailer, we know their names: Tyreen and Troy. Likely siblings, the duo have managed to start a cult in Borderlands 3 that goes by the name of “Children of the Vault” and they’ve managed to amass an army of followers. Here’s where things get interesting.

Tyreen happens to have the exact same features that are unique to a Siren, namely glowing tattoos that pulsate with Eridian energy. The funny thing is, is that her marks glow with red energy instead of the usual blue hue that Sirens such as Lillith and Maya have shown off. Meanwhile, Troy also appears to have a few tricks up his sleeve and I’m not talking about that massive mech arm of his but rather the Eridian marks around his eye that glow in a similar manner. 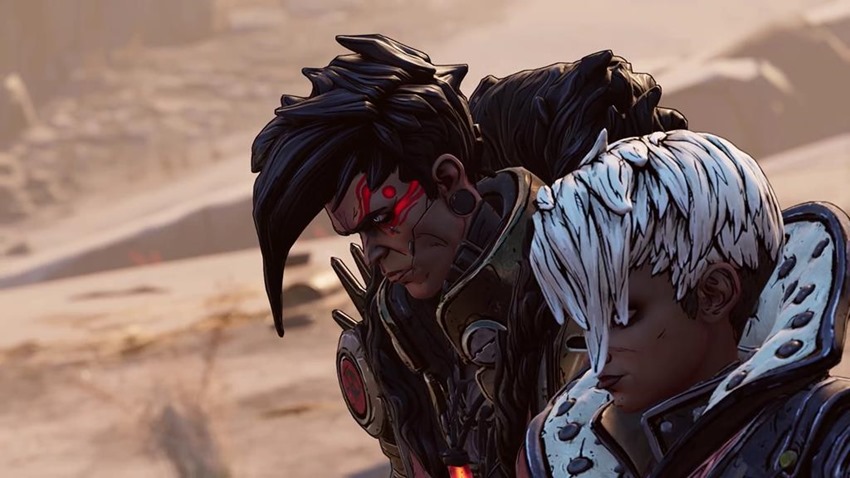 While current Borderlands lore says that there can only be a finite number of Sirens in the universe at any time, that collective also happens to be exclusive to females. Maybe Troy has managed to use  his family link with his sister to leech some of that mythic power for himself… 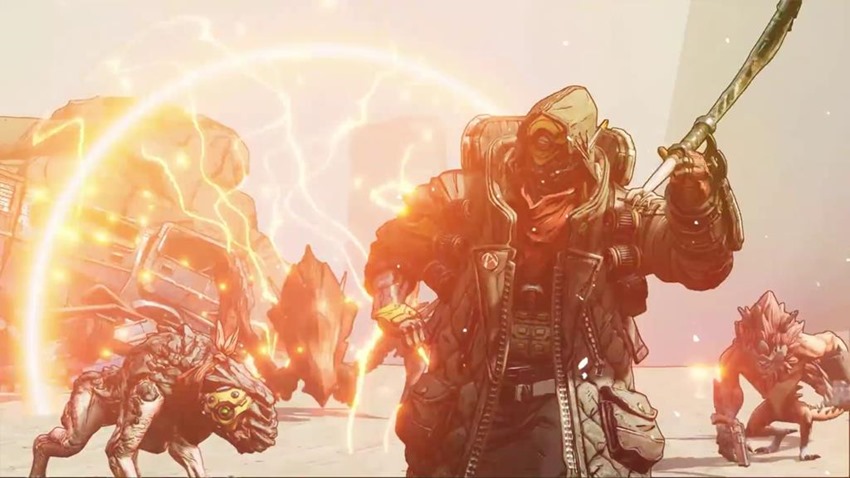 SKAGS! I HATE SKAGS! But if I choose to play as Flak, I might need to get over that hatred. Leaked ages ago in a document that looks pretty legit by now (Thanks ResetEra), the massive hulking fella seen in the trailer is one of four new Vault Hunters. Flak’s main ability is that of a hunter who can call in his pet Skag for an assist, with the hideous pooch being seen in the trailer. He’s pretty much like your regular Skag, but he happens to have a neat bandanna and a robot eye. I still hate the bastards though. 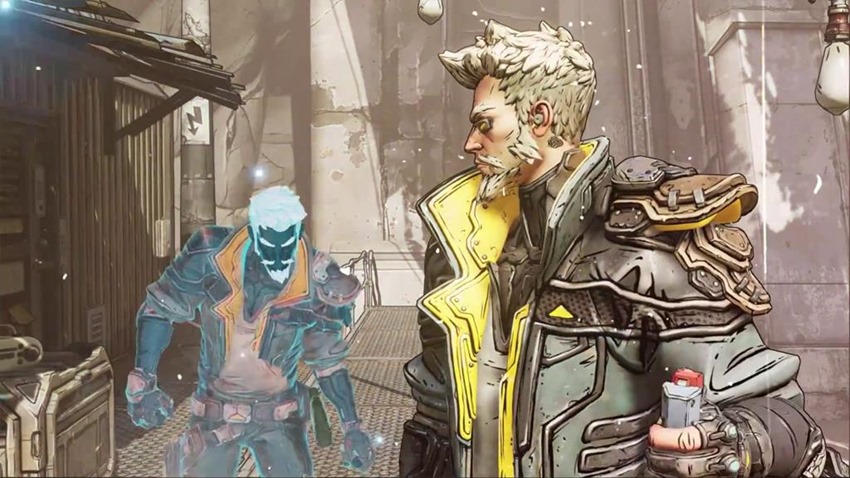 If you missed out on Tales from the Borderlands, then you missed out on a great piece of storytelling. In it, players were harrassed by a relentless antagonist by the name of August, a ruthless fighter who eventually changed sides and established himself as a vault hunter. Looks like August can flood the field with holograms so that he can confuse any maniacs after him, a trick that isn’t exactly new in Borderlands as players were able to summon their own doppelganger while playing as a body double of Handsome Jack in the Pre-Sequel.

This is probably Moze, the Bot Jock 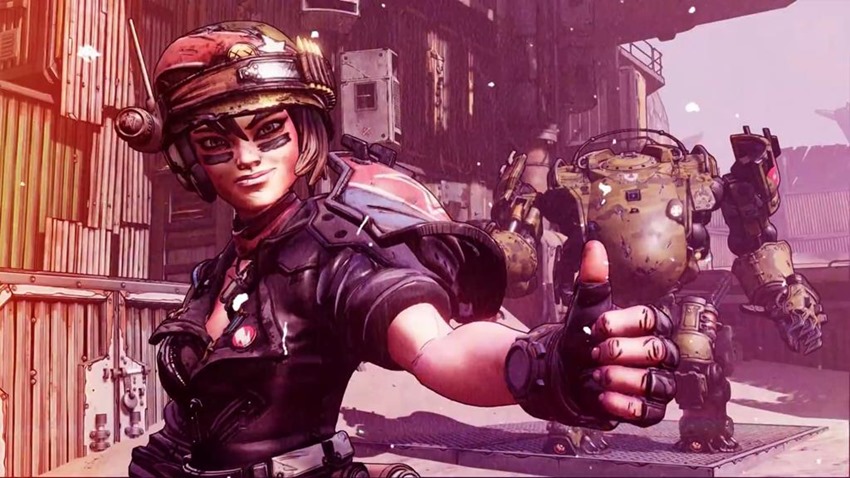 A run ‘n gun type with a talent for mechs, Moze is able to transform into an iron bear robot when times get tough. Even better, if anyone is playing co-op alongside Moze, they can mount her while she’s in this form and ride shotgun as they waste bandits. Nice. 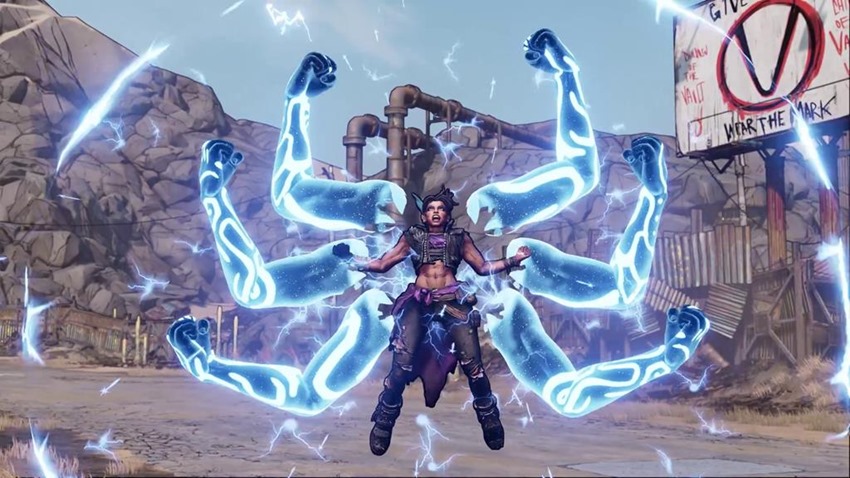 Sirens usually prefer to keep their distance in Borderlands, but it looks like our latest take on the class likes to get her many many fists dirty. Taking a page out of the Hindu book, Borderlands 3 features a Siren who can summon multiple arms of destruction to her side and she may have more than one trick up her…er…eight sleeves. I’m also betting that this ripped specimen is named Kali, after her religious inspiration.

Handsome Jack may not be that dead after all 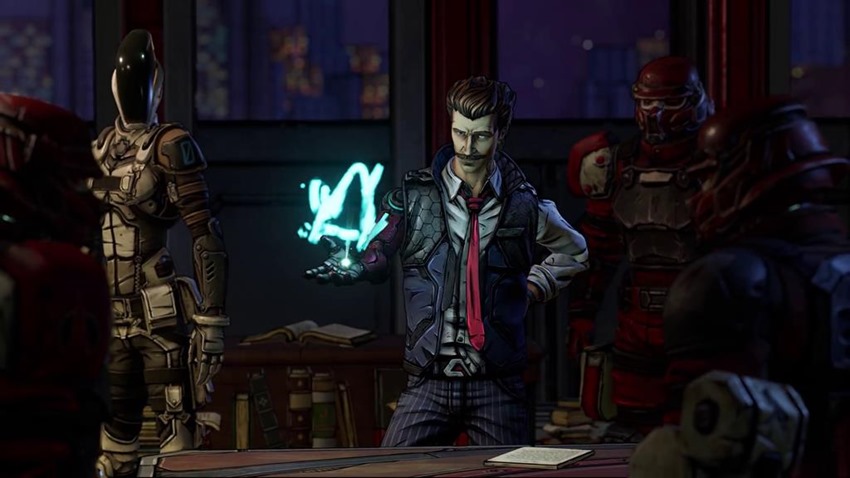 Look, I know that Randy Pitchford said that Jack was dead and the inclusion of his mask in a recent trailer was only because Gearbox felt like being assholes. I DON’T CARE! The most charismatic villain in video game history deserves to be back, and he just might have a way to return to the series. Spoilers ahead. In the trailer, Tales from the Borderlands’ Rhys can be seen.

The cowardly main character of the Telltale episodic series, Rhys managed to transform himself from wimp to Hyperion CEO by the end of the series, but not without a little bit of help along the way in the form of a Handsome Jack AI chip that he had embedded within him. Now depending on the ending you chose, one of two things happened: Rhys ditched the chip, or he saved the carbon-copy of Handsome Jack’s mind and kept it stored within his mind in case of a rainy day.

So yes, Handsome Jack is dead. But when has that ever stopped him from being a thorn in the ass of vault hunters?

Plenty of old faces are back! 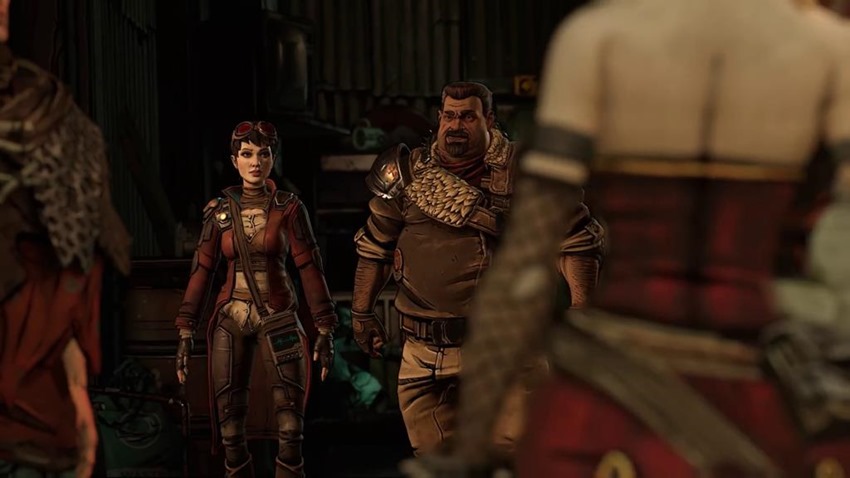 While a few faces are missing in the trailer (Salvadore and Gauge being absent apparently), Borderlands 3 looks like a big reunion of sorts. Tiny Tina has grown up a bit, she’s hanging out with generation Vault Hunters such as Brick and Mordecai, Mad Moxxxi has a fabulous new bar apparently and even Lillith can be spotted while wearing her OG vault hunting threads. 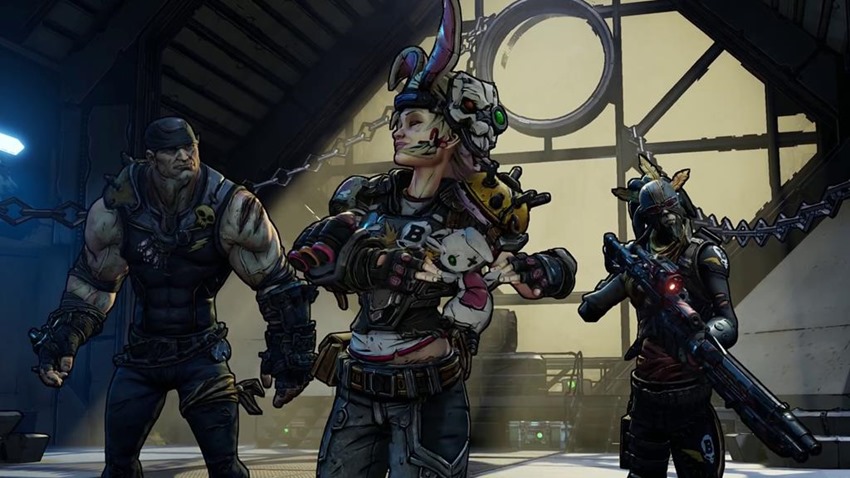 Add the wonderfully weird scientist Patricia Tannis and the notoriously stingy arms-dealer Marcus to the mix, and it looks like most of the gang is here for the latest ride.

Maliwan is ready to kick your ass 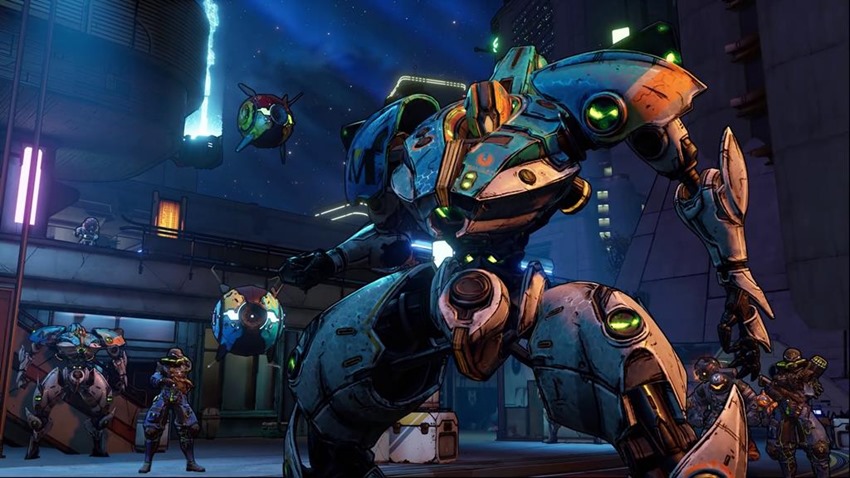 In Borderlands 2, the massive Hyperion corporation was a huge threat to deal with. Their signature yellow box droids would regularly appear to harass you, as Handsome Jack held nothing back in his mission to cleanse Pandora of your presence. In Borderlands 3, it looks like Maliwan has a bone to pick with you. Elemental weapons specialists from the previous games, Maliwan is all about bleeding edge technology and futuristic warsuits. Prepare yourself for a lot of rejuvenation trips when they douse you in acid, flames and lightning. 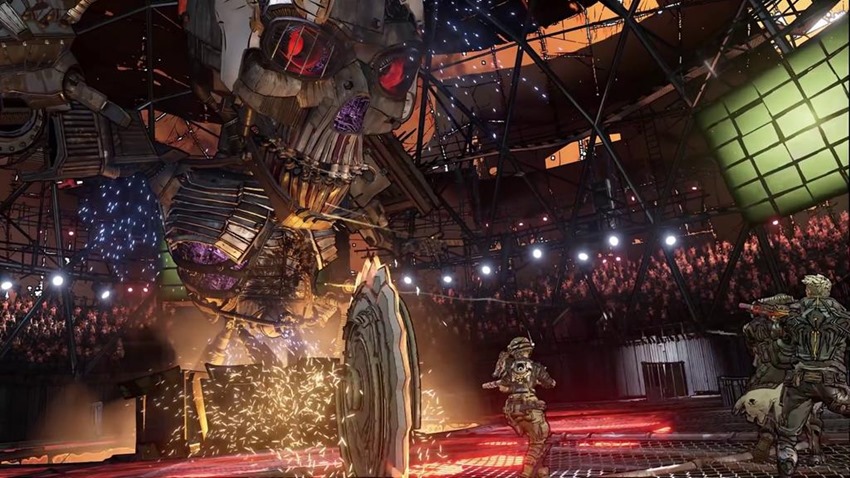 A tradition from the first game, Borderlands just would not be Borderlands without some sort of Arena being present. Borderlands 3 shows off at least one such venue for co-op carnage, and this time it looks like a proper crowd event complete with a captive audience, flames and a honkin’ big metal Psycho head that has its eye on you. 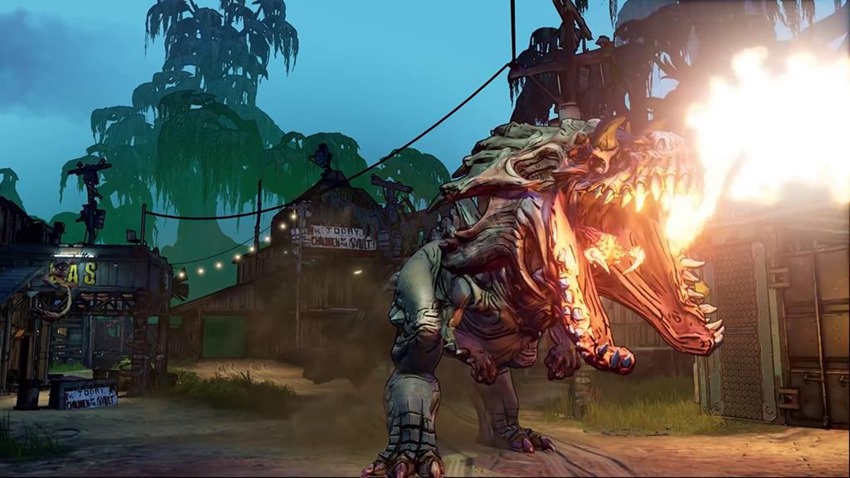 We’re all f***cked. While plenty of new environments were shown off, a few new enemies also popped up and I’m already thinking that I might need to invest in several controllers for when the frustration sets in after I die yet again because this chonky new Skag variant looks like an absolute bastard to deal with. 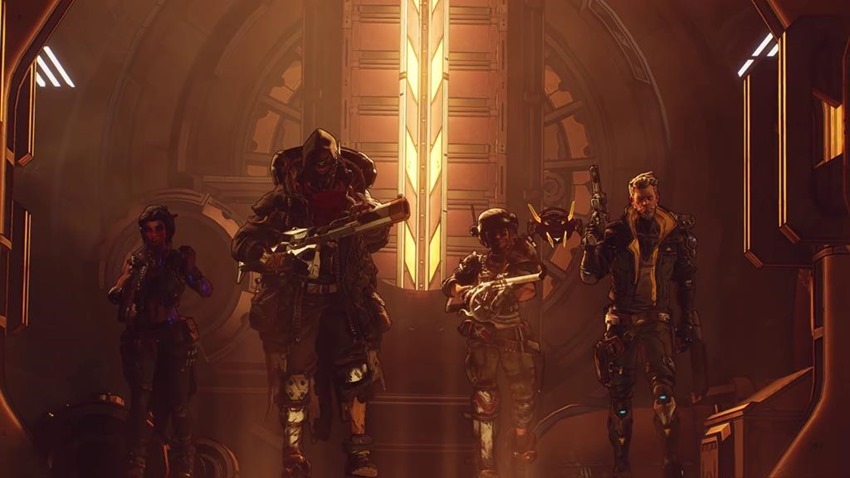