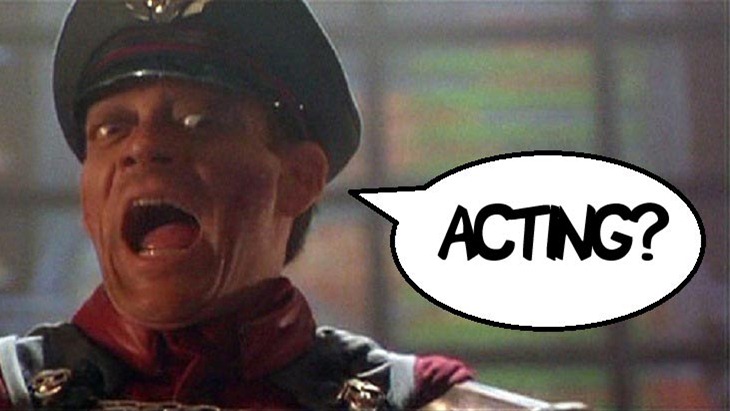 Gaming, you’ve come a long way. It used to be that selling a specific scene ina  video game was a Herculean task, limited by a lack of audio and visual technology. These days though, we’ve got motion capture, professional voice actors and all kinds of new advances in gaming. But even then, we take those moments of acting for granted. Here’s ten of the best scenes, that combined all of the above to be truly outstanding works of art.

Spoiler Warning: Um, there are spoilers below. Sorry, that’s the best that I have right now.

Dom and Marcus, best buds and brothers in arms when confronting roided-up Locust troops throughout the Gears of War trilogy. The second Gears of War game took a hefty mental toll on Dom, leaving him with nothing to live or fight for.

Cue this scene in the third game, where Marcus and his band are vastly outnumbered and outgunned by the Locust menace. There’s no escape, and it’s only a matter of time before the ammo runs out and the chainsaws fall silent.

Returning after seemingly abandoning the team, Dom drives a Baysplosion into the Locust forces, obliterating them and providing an escape route for Marcus and co. And after several years, it was a fitting end to a great character.

For a game that was all about powers, destroying cities and destruction on an apocalyptic scale, inFamous 2 had some magnificently subtle voice-acting that tied in with some motion capture that was ahead of its time.

No scene better captures that, when Cole finally confronts Bertrand and discovers his master-plan to turn humanity against conduits. Believing himself cursed and with a hair-trigger temper, Graham McTavish lays down his law as Betrand, while Eric Ladle goads him on by referring to him as a “50ft maggot”. inFamous 2 was a great game, but it’s acting like this that made it an exceptional title.

The definition of insanity – Far Cry 3

Pretty much any scene wherein Michael Mando was present was a show-stealer, but there’s a reason why Ubisoft chose to shop this particular moment from Far Cry 3 around on the convention circuit. It’s hauntingly simple, but deceptively subtle. It’s a frightening example of how just a sheer presence can sell a game, as Vaas became the face of insanity.

Give me my cure! – Batman: Arkham City

People have been asking why Batman doesn’t just end the Joker, after years of death traps, gags and a body count nearing triple digits. And in Arkham City, Batman finally questions whether or not he should allow the Joker to die.

It would be so easy, and even though he ultimately decides to abide his code of honour, the titan formula-wrecked Joker inadvertently causes his own demise when he knocks the life-giving antidote out of the hands of the dark knight. Faced with this ultimate realisation, Mark Hamill’s dying words as the clown prince of crime sum the situation up perfectly, before letting off a death rattle.

Say what you like about Ubisoft and their annual Assassin’s Creed games, but they provided a great hero for a current generation of games in the form of Ezio Auditore de Firenze. A romantic hero with skills to pay the bills, gamers got to live out his entire life in Assassin’s Creed 2, Brotherhood and Revelations.

But in Revelations, a tired and weary Ezio finally passed the torch, having completed a mission decades in the making and centuries from nearing its final goal. It’s a fantastic moment for the franchise, where Ezio passes his mantle on to a new hero, creating a satisfactory end for the fan-favourite hero.

And that is what you lack! – Devil May Cry 4

A lot of fans hated the idea that Devil May Cry 4 featured a new hero, instead of being a completely solo Dante game. But Nero was a great new addition to the franchise, and a worthy successor to the mantle of Sparda.

Carrying the spirit of Dante’s brother Virgil, but with more passion and humanity, Nero bridged the gap between demon and human, and proved that no matter how much power you possessed, it was nothing without having someone to fight for and protect.

Call me a schmaltzy bastard, but that one scene, where Nero confronts Sanctus inside the body of the Saviour and proceeds to lay a verbal and physical smackdown on the false messiah? Now that’s a scene that makes the dozen hours of adventuring pay off handsomely.

No offense to Mark Meers as regular Shepard, but there’s a reason why gamers dig Fem-Shepard. The attitude and authority that Jennifer Hale imbued the character with shines beautifully, and at the end of the second game, with the galaxy once again in peril only one rag-tag team of soldiers and scientists can stop a massive collector threat.

Nobody wants to take on a suicide mission, but if you’ve got Shepard leading the way, you’re at least guaranteed one final speech that will have you ready to kick the door down and go once more into the breach.

Into the Death Star – Star Wars: The Force Unleashed

There are plenty of great moments in the criminally underrated Star Wars: The Force Unleashed, from a duel with Darth Maul to the downing of a Star Destroyer that proved that size does not matter. But it’s this one tender scene near the end of the game, where Starkiller has embraced his Jedi heritage and is ready to put an end to the plans of Darth Vader and the Emperor.

It’s the best of Star Wars, in one segment that captures the scope and romance of the franchise, providing a moment better that even the entire prequel trilogy could not match.

A thief with honour – Uncharted franchise

You could easily fill up a top 100 list with Nolan North performances thanks to his omnipresent status in all the video games made in the last couple of years. But it’s going to be his performance as Nathan Drake where North is truly remembered.

It’s not that there isn’t any one scene that stands above the rest of them, but that the Uncharted trilogy is just such a damn good example of consistently fantastic acting from North and Naughty Dog studios. The two go hand in hand and without each other, the current of generation would have been poorer.

So the next time someone tells you that gaming can’t equal Hollywood, slap ‘em down, tie said offender to a chair and YouTube up some Uncharted cinematics to convince them otherwise.

That ain’t for kids – The Last Of Us

Despite being set in a future where my predictions about plant life and eating veggies came true, The Last Of Us had some real tender and amusing moments, between the fight for your life and staring down a dude who had done way too many shrooms.

Troy Baker was the lead in the game, but Joel would not have been complete without Ellie. The two formed one hell of a bond during the course of the game, but it’s this calm little scene where Ellie has pick-pocketed a few new items that is the real winner.

Joel’s reactions, Ellie casual fluttering of her lips and the right music don’t just make for a great moment, but a great example of just how far gaming has come in recent history.