Nick published an article last week about how Resistance 2 only debuted at number 10 on the UK charts, well everyone was pretty convinced that the only reason it was number 10 was because it had only been out for a single day when the charts were compiled.

Fast forward a week and we see something slightly disturbingâ€¦ Resistance 2 is gone. It didn’t even make the charts this week. To make things ever stranger it appears that Gears 2 didn’t make it either.

However they do love their WWII shooters with COD5 taking the number 1 spot.

So this just goes to show that the English prefer to either shoot real people or kick a dead pig around, no science fiction for these guys.

EA’s Star Wars: Battlefront II not only holds the record for the most downvoted Reddit com… 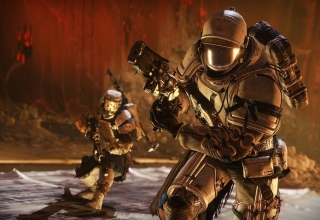 If you were looking to grab a quick special over at Xur or run a few rounds in the Crucible of Destiny 2, then bad news: The game was pretty much unplayable for a while. Hooray always online connected video games! So what’s the deal? The brouhaha all broke out a few hours ago when Bungie took Destiny 2 offline in every way possible, as players were hit with a bug that had the slightly nasty side effect of wiping out their materials.