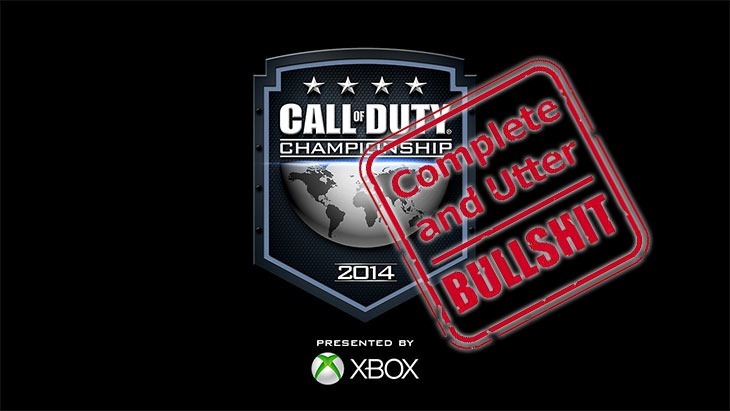 eSports is not my beat – but some information’s come about that has me incensed enough to voice my anger and frustration regarding the farce that is this year’s Call of Duty Championships.

As you already know, the team that’ll be representing South Africa (though not officially) in the Call of Duty championships managed to win their qualifier by exploiting a loophole in the MLG’s rules. As per their qualifying rules, just two members on any team needed to actually reside in the country they’re representing. Winners Team RiZe exploited the overseas lag in a peer-to-peer multiplayer game, by getting their matches hosted by their UK-based drafts to snatch victory from – in my opinion – more deserving opponents.

It appears that rule relating to two members having to be from the country they’re representing applies only to the qualifiers. The MLG rules also state that:

Any changes to a team roster after the tournament has been seeded is at the discretion of tournament staff.

If the new player making up RiZe’s ranks has got his plane ticket, it would be safe to assume that the MLG in their infinite wisdom has okayed everything, and that it all falls within their rules. That, however, doesn’t mean we have to be happy about it. Want to know what makes it worse? These are the sort of people we have representing us:

Team RiZE…I wish you the best of luck. Wait, no…no I don’t. Screw whatever sense of pride and patriotism I have. I hope you get knocked out in the first round.

31 Call of Duty teams are in Los Angeles to battle for their share of $1 million this weekend. Here’s a list of all 31.

I’m going to pick one team at random to root for, because I’m sure as hell not supporting RiZe. Zoe’s there to cover the entire event, and should have the opportunity to interview the team. She’s under instruction to ask the hard questions.

If there’s one thing (well, one of many things if we’re honest) that really ticks me off, …