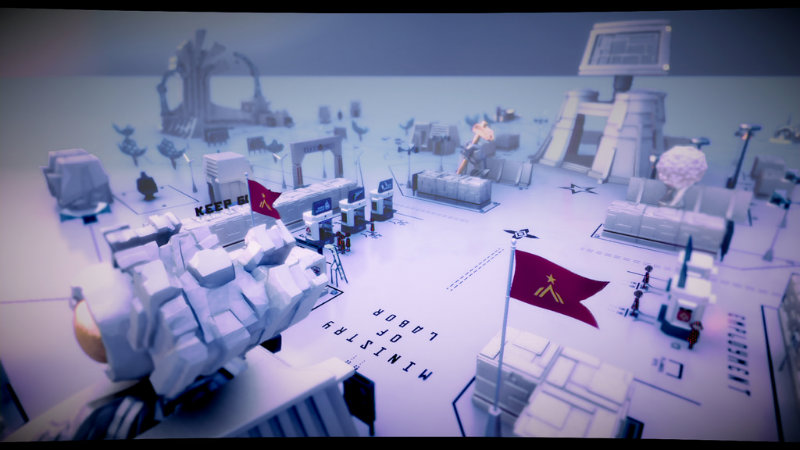 When Tomorrow’s Children was announced at Gamescom, we had no idea what was going on. Sure, it looked pretty, but what is it actually? PlayStation is giving us some more details, but I’m still horribly confused.

Here is the original game reveal from Gamescom:

The back-story is that in the late 1960s, Soviet Russia did an experiment to try and unify all of human sub-conscious thought. However, it went wrong and nearly obliterated all living things; the white void is what’s left of mankind and its dreams. The things that are created by the void come from said lost dreams, and nightmares.

Fast-forward almost 100 years and the remaining scientists have, while artificially extending their own lives, managed to rebuild society to some extent and they have invented a “projection clone” technology which is where you come in as one of these clones tasked to search out and discover as much human DNA (stored safely in Matryoshka dolls) as possible, bringing it back to the town to restore it to human form again. The scientists can’t risk venturing out themselves because they are the only original human beings left.

Okay, so you’re a clone and you need to gather human DNA to restore human form. How does this all work from a gameplay perspective?

The Tomorrow Children is an online game, but with a combination of synchronous and asynchronous gameplay. If you want to explore by yourself, you won’t by bothered by other players because they can’t see you. Once you start doing things, though, you will pop up in their worlds.

It’s pretty interesting to see people working together within this system, digging out the giant monsters or Izverg as they are called and building up their town with the resources they discover. There are a number of ways to communicate with other players, such as blowing a whistle, or gesturing, or using a megaphone, and later on we will be adding the ability to hijack the Tannoy speaker system in the town to really get what you want to say across to other players.

The game is a sandbox but there are some loosely defined roles you can take on such as “Radio Officer” which is a kind of scout role, and Engineer Commander who likes explosives and building roads, but you can mix and match your tools and weapons anyway you like. The policemen around town will assign you roles and give you a default tool if they feel there is a shortage of a particular type of player. You can always ask them for advice too.

So, it’s a giant sandbox where people can work together towards building up the town with resources and killing buried monsters? But you’re invisible if you’re not doing things, so you can explore on your own – just don’t start digging or you’ll have to play with others? Yeah, I’m still confused. It sounds interesting, but I’m just not sure I get it yet.