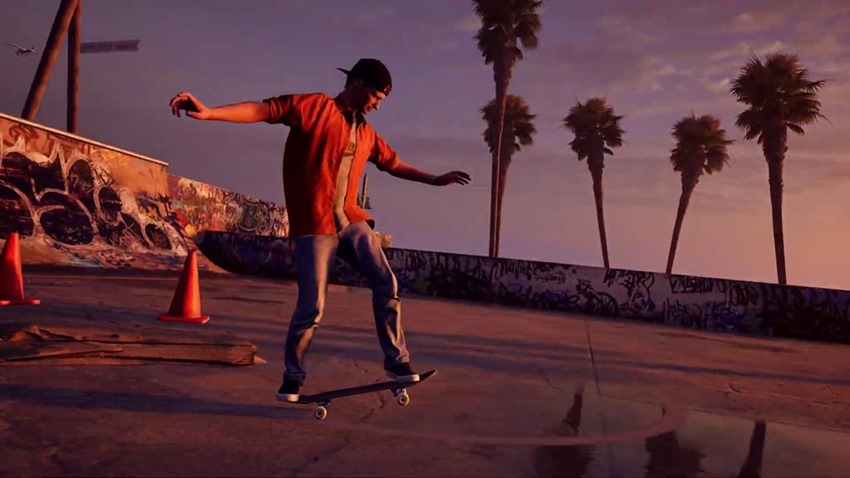 You think skateboarding, and the first name that pops into your head of the all-time greats in the extreme scene is Tony Hawk. And it’s not hard to see why! Having already established himself in the 1990s, slapping Hawkman’s brand onto the first Pro Skater game gave it an air of legitimacy, an official endorsement that was the Nintendo seal of quality for its genre.

Hawk himself used this momentum to pull off a 900 mainstream spin, fuelling his brand with the breakout popularity of the game and its sequels and eventually landing the biggest prize of them all: A guest spot on an entirely forgettable episode of The Simpsons:

Beyond Tony Hawk’s game-selling brand however, the games featured the real cream of the crop in the skateboarding scene. We’re talking legends of the half-pipe, icons such as Bucky Lasek, Chad Muska and the wizard of wheels that is Rodney Mullen. Future games would feature a rotating cast of hot off the street skaters, such as Eric Koston, Mike Vallely and Officer Dick, growing the cast and the scope of the game over the years.

The upcoming Tony Hawk’s Pro Skater 1 and 2 retains pretty much all of the original skate or die legends, but they won’t be grinding a rail or two without some new blood giving them a run for their money when the game pops a September release date Ollie. “The world-class pro skaters we’re adding to this remaster took the tricks and combos from the video game and made them possible in real life,” said Michelle Bresaw, Vice President of Product Management and Marketing at Activision.

We’re proud that the remaster will represent the skate culture landscape today with a diverse roster of skaters that will appeal to any gamer.

As for that expanded roster? Here’s who’ll be joining Hawk and pals in ye olde Warehouse level and more:

Some of those names aren’t entirely new. You’ve got Leticia Bufoni and Riley Hawk, skaters who’d most probably like to forget that they were in Tony Hawk Pro Skater 5, while Nyjah Huston can trace her origins in the franchise all the way back to the heavily underrated Tony Hawk’s Project 8. The newer names on the list are properly exciting though. Japanese skater Aori Nishimura has become the master of heel flip tricks while Tyshawn Jones can pull off moves that defy the laws of physics.

There’s a new generation of skaters out there, and it’s about time that they got a chance to shine in what looks set to be a glorious remake of the games that defined a generation.