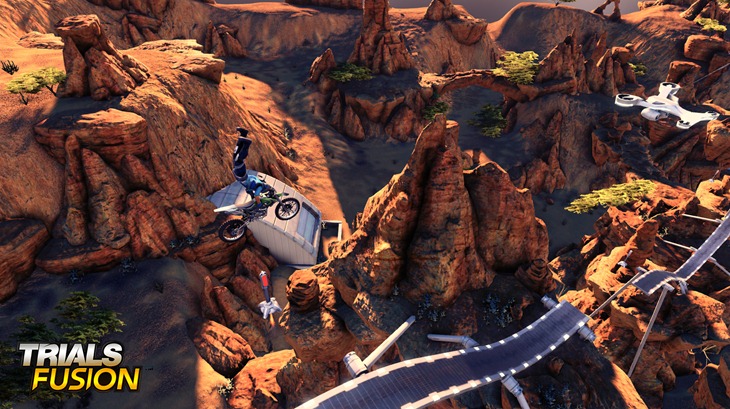 Some games in life are challenging. Some are burtally difficult. And then there’s Trials Evolution, a motocross game which feeds on your tears and broken controllers while remaining more addictive than heroin chocolate. That classic game is getting a sequel in two months. And I’m planning on stocking up on spare controllers.

Trials Fusion arrives on April 16 for the Xbox One, Steam, Xbox 360 and PlayStation 4. If you’ve never played a Trials game before, the concept is relatively simple. You’ve got a bike, a checkpoint and a drive to get there as quickly as possible. Sound easy?

Factor in some gravity, driver positioning and courses that boast a difficulty level that can only be described with forbidden course words (MEEKROB!), and you’ve got a game that will test the patience of any gamer. Fusion is designed specifically for new-gen systems according to my Ubisoft press release, so I guess that means that your constant failures will at least look rather pretty.

As usual, there’ll be the standard championship modes, online options, crazy challenges and the well-received and more than welcome return of the editing tools that have been brought over from Trials Evolution.

The game will cost you $19.99 on digital storefronts, while a physical copy for the Xbox One and PlayStation 4 is currently set at $39.99. That one includes a season pass however, for extra content. Here, feast on these screenshots of the game while I go stock up on spare controllers.

I swear, the damn game is like Pringles. Just one is never enough and someone is going to end up being stabbed in the face with a glass bottle.