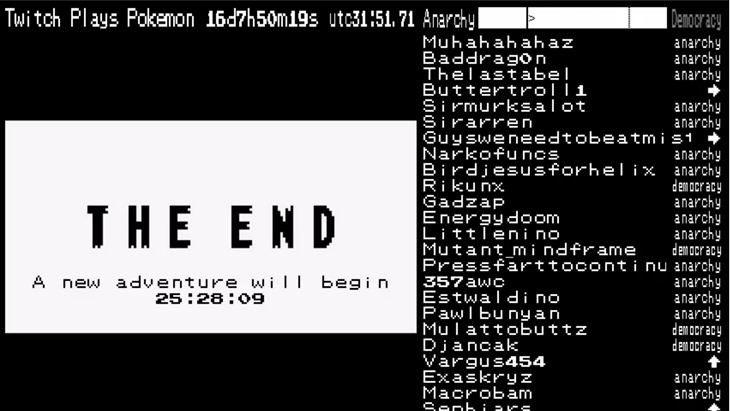 Twitch Plays Pokémon is over after beating the Elite Four and the final rival battle in just 16 days, 7 hours, 50 minutes, and 19 seconds!

In a truly stunning display of luck and teamwork, the collective Twitch chat of over 100,000 people have finished Pokémon Red from start to the end screen. I thought this would take literal months, not two weeks and a bit!

Before their winning effort, they had got up to the final battle with the rival, but were too weakened from the Elite Four. Luckily their star Pokémon; a level 70 Zapdos, a high level Pidgeot, and a Nidoking were enough to get through the final leg of the game. If you go check the chat now, you can see the amount of delay they had to deal with. The game has been finished for a while, but the inputs just keep on coming. It really is amazing that they were able to get through the whole game.

According to the stream, a new ‘challenge’ will begin in just over 24 hours, suggesting a new game of Pokémon, or perhaps another game to conquer. Sources from chat say Gold, Silver, and Crystal might be next, but this is unconfirmed at this time.

What a spectacular end to such a crazy undertaking. I highly recommend watching the video above of the end of TPP, as it truly was a tense and exciting ending. Bravo to the chat collective and everyone who stuck through sticking points like ledges and the almost insurmountable Safari Zone. I look forward to watching the next stream!