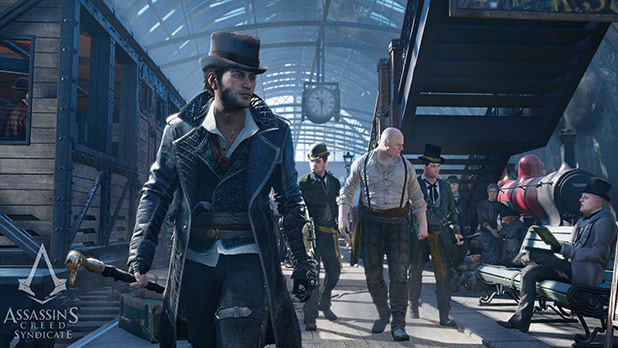 Assassin’s Creed: Syndicate has officially been revealed and it’s looking gorgeous, as expected. However, there’s a whole lot more than a pretty face – the game has a bunch of new features that will expand gameplay options and are getting me excited, yet again.

First up, here is some gameplay. I will do a full analysis soon, but so far I’m happy to see the zip line options as well as environmental takedowns finally making an appearance.

Then there’s this debut trailer that makes it seem like the assassins are actually just a bunch of communists.

At least now we know Darwin and Dickins will be involved thanks to the evil pre-order bonuses. I’m still not convinced that anyone should be pre-ordering Assassin’s Creed games, but I do like some of what I see. Sure, a lot of it still relies on the same mechanics that have worked so well in previous Assassin’s Creed games – the core principles are obviously what gamers know and love about the franchise. However, it’s great to see the expansion into the zip line for faster movement, as well as the use of environmental take downs. At last! While we didn’t see any footage of it, the end of the gameplay trailer implies that earlier reports about the ability to play as Evie or Jacob could be true; it would be great to also play as a female character in Assassin’s Creed, especially if they gave her some unique abilities and those oh so expensive and difficult animations.

I still need to see a lot more before I’ll let myself get hyped for the game, but it really is looking great and as long as they actually finish the game before it’s released on 23 October, things could go well for Ubisoft. Here’s hoping that this becomes the first truly new generation Assassin’s Creed game and we can all wipe Unity from our memories.