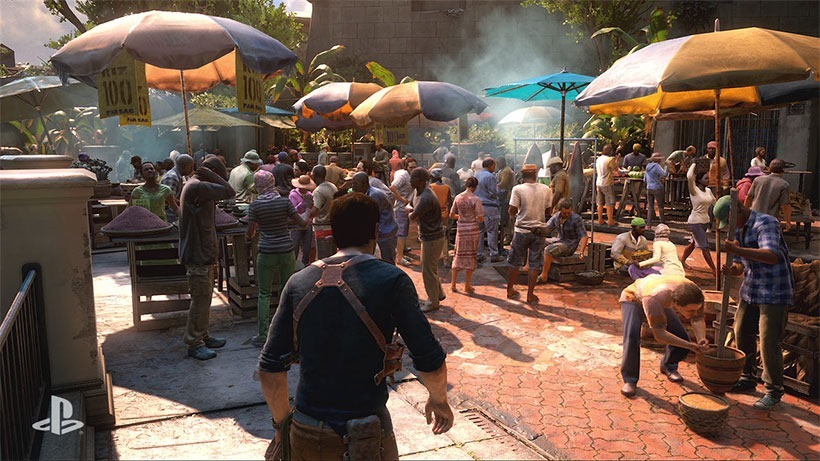 That sounds like marketing hyperbole, it really does – but that’s the conclusion that Eurogamer’s Digital Foundry has come to after putting the game’s latest 60Hz (but 30 fps!) video through its paces. They’ve had their digital specialists pore over every frame, and have walked away impressed. Presumably in slow motion, and with explosions behind them.

According to them, “Uncharted 4 goes much further than any PS4 or Xbox One game we’ve seen in its use of physics, and the layering of world detail with shaders. Opening at the gates of a bustling Madagascan marketplace, what unfolds is unlike any major title seen on console to date.”

“Where the December demo focused on wide spaces, foliage systems, and its more flexible AI, the E3 demo goes to town with object physics applied across the world, as flaunted brilliantly with a jeep chase to ‘Sam’s tower’ at the bottom of the city.”

It handles physics rather well, far more than any console game to date.

“Drake’s early shoot-out also makes a statement of intent for Uncharted 4’s use of physics. Every object in the marketplace shatters or bounces off the next item, and players are seemingly never safe taking cover in one spot. With procedural chip damage in place as well, most spots deteriorate dynamically in the face of oncoming gunfire – ripping out chunks of the scenery to leave Drake exposed. “

On top of that, it’s not just the sort of perfunctory physics calculations that are fleeting, going far deeper than you’d imagine.

“One of the more surprising applications of this is one that goes unnoticed; rice bags actually deflate using a mesh distortion system Naughty Dog has in place…”

“In essence, for this demo, it allows each sack to sink as rice leaks out from bullet-holes, where each shot cues a physics-based impact on the bag, while deflation is simulated using mesh distortion. “

And despite that, the PS4 handles it all with aplomb – very probably because it’s running at 30fps instead of 60. That’s something I’m okay with for a third –person action game.

“PS4 is adept in handling everything Uncharted 4 throws at it, from the on-foot shoot-outs with heavy physics to streaming in new terrain during the car chase. By conceding to a 30fps lock the team is at least able to go all out with this set-piece; a preference compared to a theoretical 60fps that just can’t be sustained.”

That’s really impressive stuff – and I look forward to playing the game in 4K glory at 60 frames per second…when it’s remastered for the PlayStation 5.