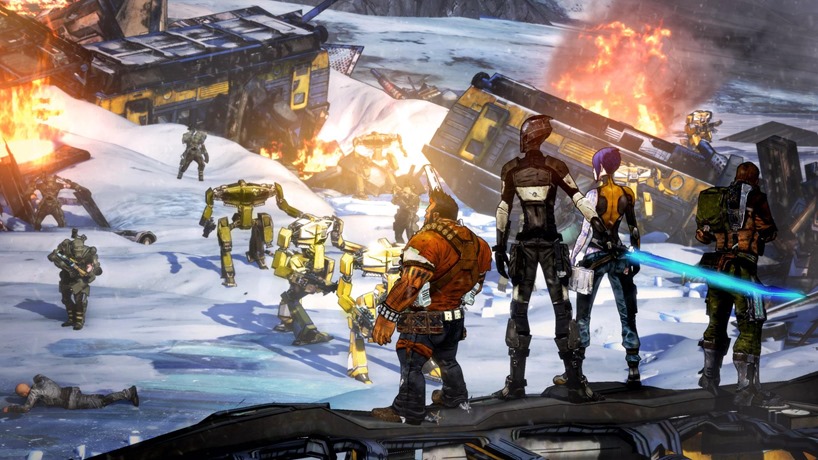 Humble Bundles are awesome. Borderlands is also pretty awesome. So a Humble Bundle of everything Borderlands is basically a furious wet dream that only Mr. Torque himself could adequately explain in his colourful assortment of shouted words. Just yesterday though, the entire thing go even better.

In fact, if you somehow haven’t played any Borderlands at all (scoff), I don’t think there’s ever going to be a better time to grab what is turning into a definitive collection. Below the average price pay wall you’ll get Borderlands and three of its add-ons for the low price of whatever the hell you want. Paying the average price (which is just peering over $7 not) previously netted you a copy of Borderlands 2, a 75% off coupon for The Pre-Sequel the Creature Slaughterdome DLC and both additional characters (Mechromancer and Psycho).

The updated bundle adds Claptrap Robot Revolution – which acted as a bridge between Borderlands 1 and 2 – as well as all four Headhunter DLC packs. If you’d like, you can still pay north of $15 for everything above on top of the Borderlands 2 season pass, which pretty much nets you the entire franchise (bar the additional dollars you’ll need to dish out for The Pre-Sequel) for an extremely low price.

Quite honestly, this is far beyond what any Steam sale is ever going to be able to produce, so it’s really the best chance you’ll have at quickly catching up with on of the best IPs around. And just in time for the build up to Borderlands 3 – which Gearbox is actually working on. The Bundle expires on July 7th, so don’t delay.