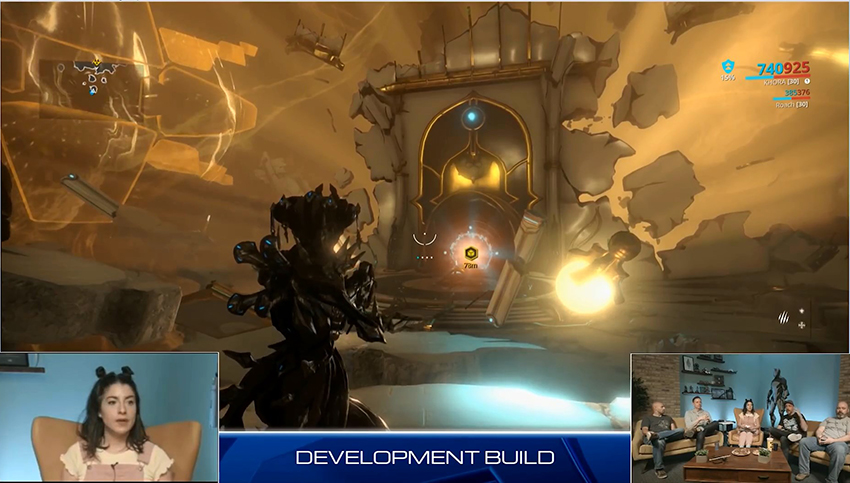 Devstream 109, the latest in Warframe developer Digital Extremes’ regular peek behind the curtain, took place this past Friday and it was a big one. Led by Community Manager Rebecca Ford, the team showed off the upcoming new frame Khora as well as the newly renamed Sanctuary Onslaught (formerly Dark Sectors 2.0 and then Void Onslaught) for the final time before release… NEXT WEEK!

Yep, PC Warframe players (sorry, fellow console players, we have to wait a bit) are getting a big batch of new free content sometime in the next few days. So what are they in for? You can watch the full Devstream below, but we’ll bring you the highlights under the video.

Firstly, as promised, Khora’s abilities have now been completely reworked. Originally she was intended to herald in the new Damage 2.0 model that would revamp the three physical damage types – Impact, Puncture, Slash – with Khora being able to switch her damage output between them on the fly. However, fans’ displeasure at the proposed changes for IPS caused DE to put it on the back burner and thus a new approach was needed for Khora as well.

Khora is now styled as a “master of beast and ensnaring her foes – perhaps playing with them a bit too!”. Her new first ability is Whipclaw, a heavy damaging AOE whip attack that draws stats from your melee mods. Her second ability is Ensnare, a crowd control ability that wraps an enemy in chains and will slowly draw in any additional enemies that stray too close (ensnared enemies take increased damage from Whipclaw).

Finally, her ultimate fourth ability is called Strangledome, which throws out a literal dome of chains with points which act as their own ensnare point, grabbing hold of enemies, tying them up in the air, and then doing damage over time.

So how do we get to play as Khora? For that, we need to to do some Sanctuary Onslaught. Now built around Cephalon Simaris, the new mode is a fast-paced, arcade styled game that is meant for short 30-40 minute intervals and not long endless runs. After being greeted by Cephalon Simaris, you will enter a void portal to a tileset focusing on a specific faction. Once there, you need to kill enemies as quickly as possible, with enemies giving you points (the more difficult the enemy, the more points you get) as well as helping to hold up a void portal stability meter which signals game over if it hits zero.

You have to do this until a separate timer counts down to the spawning of a new portal which will take you to a new area. Once you hit this new area, you will get 45 seconds in which you can earn Focus, which means trying to go on a blitz as soon as you arrive. Going to a new zone will also up the difficulty of enemies sharply, which is what would make lengthy stays so difficult (though you just know some people will be attempting it).

Sanctuary Onslaught will come in both normal mode, as described above – this is also where Khora’s parts will drop – and Hardcore mode which ups the difficulty considerably but correspondingly also increases the rate you earn Focus. Making it any considerable distance in Hardcore mode will also reward players with the new (and probably controversial) Peculiar Mods. These mods will grant players weird abilities like causing flowers to sprout on enemies where they’re shot. No, seriously. That’s it. Even the devs have admitted that as far as gameplay is concerned, these Peculiars give you zero advantage. They’re just bits of silliness to show other players that you’ve made it through the Sanctuary Onslaught.

Some fans are already calling for these Peculiars to rather be categorized as Arcanes so that they don’t take up a useful mod slot, or maybe to instead give us Peculiar versions of existing mods so that they serve some purpose. Personally, I don’t agree as that will just add another level of grinding and cause us to have to spend a whole lot Endo on mods we already have for no discernable benefit. Rather just leave it as a bit of pointless frivolity.

On top of the two big reveals for Khora and Sanctuary Onslaught, the devs also showed off a brand new drivable vehicle. This unnamed buggy will be part of the still-in-development Venus open world map, and since DE didn’t want to show that off yet, Reb got to drive around Cetus in this early build of the new ride.

Also still in development is a brand new UI for Warframe which Game Director Steve Sinclair has been teasing on his Twitter timeline for the last few weeks. Besides for just looking good (the new UI will have colour-coded themes to allow for some customization), DE recognizes that the current UI is a bit overwhelming for newcomers. To help with this, horizontal scrolling through items are being ditched which will also help to make the entire experience feel equally as intuitive whether you’re using a controller or a keyboard & mouse. Added to that last point, keyboard & mouse support will also be coming to PS4 at some point in the near future.

Another aspect of Warframe getting a full rework sometime in the future is the game’s companions. Called Pets 2.0, this new system will be completely overhauling how you acquire and mod pets (maybe killing a bunch of alien dogs to get your own alien dog doesn’t make complete sense). They may also be revamping the ranged abilities of your pets so that they can do a bit more as they accompany you. While DE didn’t reveal much further on this, they did show off early concept art for a brand new Moa Companion wearing a top hat and bow tie. Yes, you read that correctly.

Besides for all of the above, DE also showed off a bunch of other smaller features, including the next round of Tennogen (fan-created cosmetic items that go for sale in the game), which included some gorgeous skins for Chroma and Gara. You can check out all the details in the official Devstram wrap-up on the Warframe.com.