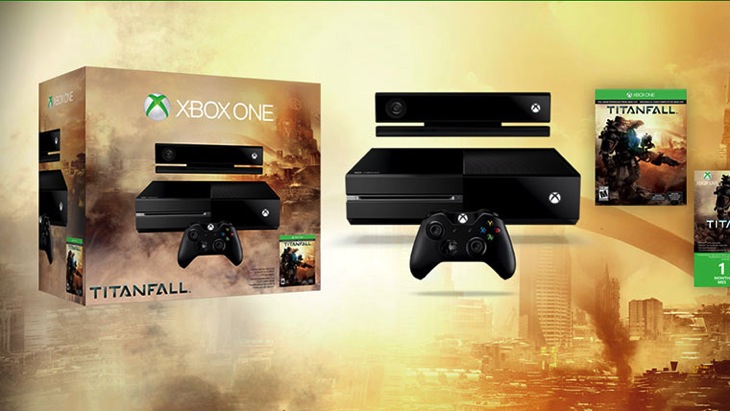 The PS4 has been outselling the Xbox One – last numbers showed Sony’s console beating Microsoft’s by two to one. Now, the Xbox One is getting a Titanfall bundle, a sure fire way to sell more units. But it’s the price drop that is most interesting.

First up, the Titanfall Xbox One Special Edition Bundle. Confirmed by Major Nelson, the bundle has all the usual Xbox One stuff (console, Kinect, controller and headset) as well as a download code for a digital copy of Titanfall and a one month Xbox Live Gold membership. If you want that Titanfall Xbox One controller, you’ll have to buy that separately. The retail price is $499 in the US of A – this means that the game is essentially free for those who waited to get the console in this bundle. But it’s an even better deal for those living in the UK.

That’s right, instead of the initial RRP of £429, the console has been confirmed as going for £399 in the UK from 28 February. Harvey Eagle explained:

I’m not going to comment on the specifics of the individual lines of business, as it were, or on console costs, but the way we look at it is very much as an ecosystem. It’s about selling as many consoles as we can to create that install base, then where possible, trying to attach games, accessories, LIVE subscriptions and transactions to those customers. That’s a business model that’s worked well for us with the Xbox 360 and will hopefully continue with the Xbox One.

The UK is obviously an important territory for anyone in the console business – it’s the second biggest market in the world, so I don’t think we’re any different to anyone else in terms of placing high value on the UK as a territory. This is about it being the right time to offer the best value we can – to adjust the price point and get it down to £399 in support of Titanfall, which as you know is one of the hottest games on any platform. We’ve seen two million people play the beta and the feedback we’ve had has been incredible really.

I get it, the UK is important. Considering the special relationship between EA and Microsoft (two beloved corporations), it makes sense that they would work together closely on Titanfall to ensure a large install base. While any price drop can be great for consumers, I’m not sure this move is that wonderful for all gamers.

Three months ago, people queued for hours in order to get their hands on the Xbox One. There’s even that wonderful picture of that guy hugging his new console. Yet those early adopters are getting a serious kick in the teeth. The console isn’t even three months old, plus we kept being assured that there’d be no prices drops for quite some time, and yet already those early adopters are made to look like idiots – at least in the UK. Besides, if a price drop like this can happen in the UK, what’s to stop other markets from not buying the new console until it also comes down in price? Now, all those people in the UK who thought they’d wait a bit to buy the Xbox One are vindicated – why be an early adopter when all the benefits come to those who wait? While this may be better for building an install base, it certainly does not build good faith among hardcore gamers who supported the console from the start.