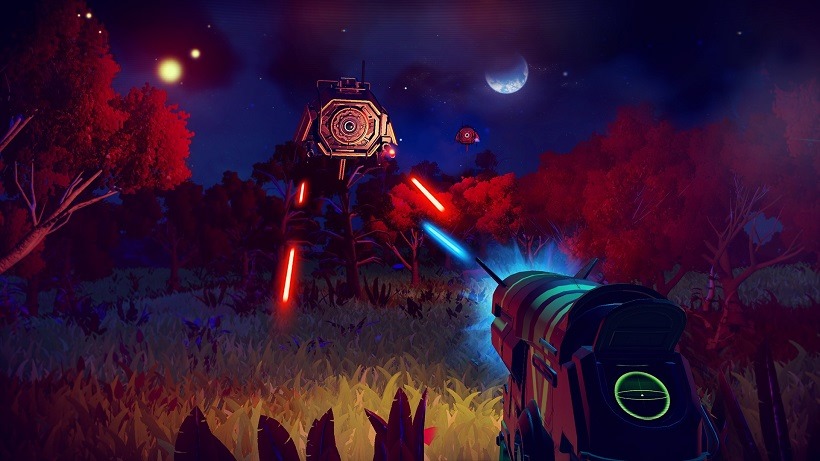 I’ve got plans for No Man’s Sky. Plans that involve finding my very own planet, and naming it…Bob. Yes, I may have watched way too much Titan AE as a kid, but this is a very real and worthy cause that I’ll champion until the day I die.

No Man’s Sky may be a space exploration game primarily, but it’ll also feature plenty of on-the-ground action.

The kind of actio, that you need to be prepared for. And as much as I love Swiss Army Knives, they aren’t exactly equipped for surviving alien terrain and wildlife. Which is where the handy side-arm you wield in the game, comes into play.

It’s more than just a device that spits out some hot lasery death in No Man’s Sky, as it can transform into a wide variety of other tools. As Hello Game’s Sean Murray described it to EDGE:

In a lot of sci-fi games, all their weapons are basically AK-47s with some red stripes down the side,” Murray says. “We don’t like that; we want something that feels advanced and cool. So you have this multitool, which is a little bit like a tricorder.

That tool will be able to scan the environment, find resources and recover strange new technologies which can be used to upgrade it to make it more potent.

The scanner for example, only works at short range, but upgrade it enough inside of the game, and you’ll be able to send out a pulse that finds resources in a far more massive range all around you.

And you can still use it to keep yourself safe, because dammit, that strange and friendly herbivore is coming right for us! The only thing missing from the scanner-gun-space-Swiss-army-tool then, is a handy little toothpick and that tweezer which is fun to flick.