My relationship with Hearthstone took a steep dive of Cristiano Ronaldo proportions last year. I can’t quite put my finger on it, but following the stellar showing in 2016, where Whispers of the Old Gods (still my favourite piece of content, I think), One Night in Karazhan, and Mean Streets of Gadgetzan launched, everything that followed in Blizzard’s once addictive card game just didn’t seem to hold my attention, not for the long run anyway.

That changed when the latest expansion appeared. Blizzard released Kobolds & Catacombs near the end of 2017 – just in time for the festive season. I dabbled with it a fair amount before I disappeared for my December adventure, but it wasn’t until recently that I fell deep into its cavernous grasp. 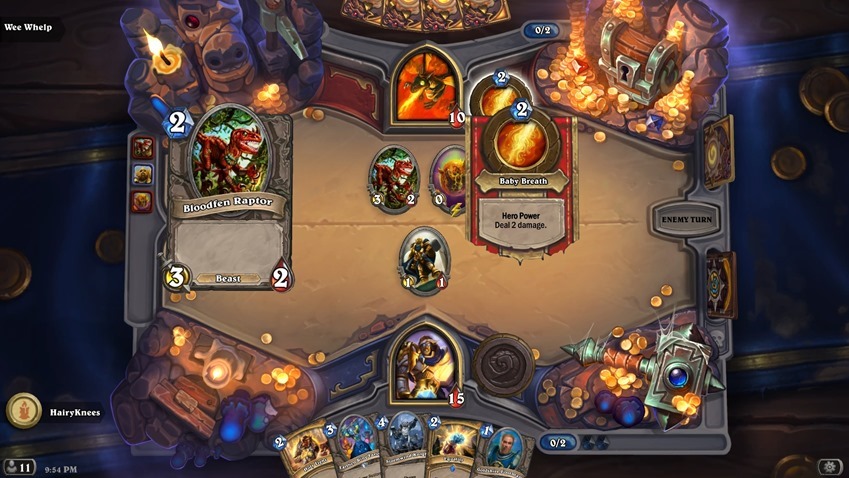 Now, if you’re a huge Hearthstone fan, fair warning, this piece isn’t for you. I’m sure you’ve already spent the last month and a bit plundering through the vast underground in search of treasure, enjoying the new cards (legendary weapons, spellstones!) and the Recruit mechanic (a minion from your deck, straight into play? Neat!). You’ve no doubt spent a huge portion of your time burrowing down through the ranks to find that evasive legendary status too, or at least trying to.

No, this is for people like me – those who lost their way in the dark, and needed something to guide their way back to the addictive light. This is for adventurers who’ve long since shelved Hearthstone, for whatever reason. Heck, if you’ve somehow never played the game, this is for you too, because thanks to one of the Kobolds and Catacomb’s new features, Dungeon Run, now is probably the best time to drop into the card game. 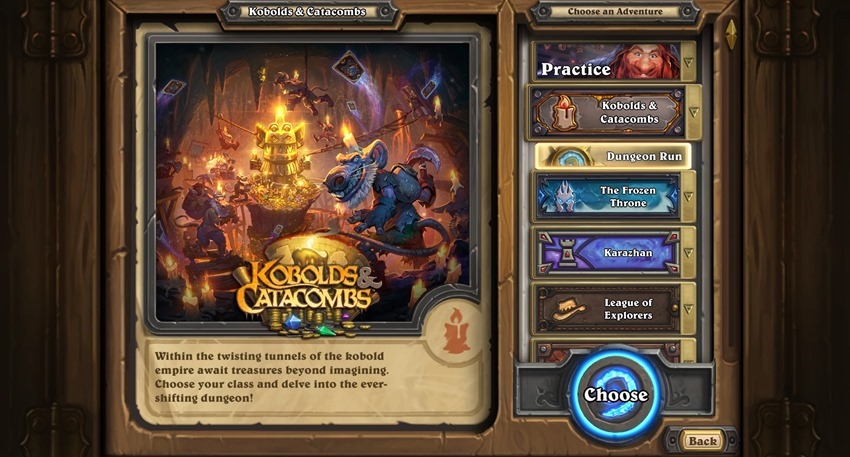 First however, context! Blizzard changed their approach to expansions in 2017, which might explain why I had a falling out with Hearthstone to begin with. Prior to this new strategy, they would alternate between releasing a set of new cards, where players could craft precisely what they wanted with dust (or pray to RNGesus for the perfect drop), and solo adventure-focused content, which acted as nuggets of narrative puzzles that granted specific cards or sets as a reward. Personally, I always preferred the latter, the single-player content to be exact, so it was sorely missed when it suddenly vanished.

Though, adventures never disappeared entirely. With Knights of the Frozen Throne (the expansion released before Kobolds and Catacombs), Blizzard bought back solo material, albeit in a somewhat free format. Granted, if you wanted that elusive legendary out of the new 100+ cards, you’d still need to hoard up a pile of dust to create it, or hope against hope that one of the dozens of packs you’d accumulated (or bought) with your hard earned gold would contain it. On the flipside, if you had little to no interest in competitive play, there was at least a free campaign to enjoy, and this trend continues with Kobolds and Catacombs.

What I really want to talk about is the free single player content that accompanies the latest expansion – Dungeon Run. To me, it’s a combination of Hearthstone and one of Blizzard’s other popular titles, Diablo, albeit in hardcore mode.

If you die, you start from scratch, and no, you won’t be scoring yourself legendary cards along the way to keep in your collection permanently, nor will you be sucking up millions of gold coins to splurge on brand new cards (IMAGINE!). What Dungeon Run is, is a challenge to defeat eight bosses, with you “levelling up” after each one. It’s a roguelike really, which makes it infuriating, yet insanely addictive. 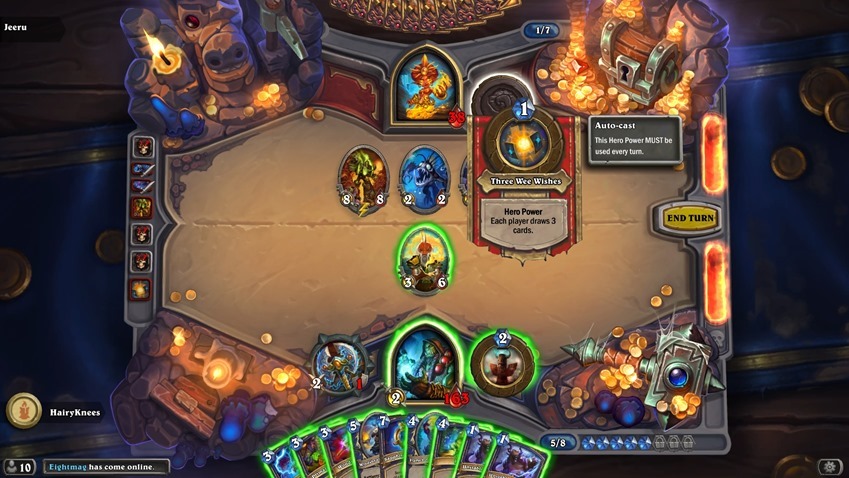 Before embarking on a Dungeon Run, you’ll need to choose from one of the nine glorious heroes. Ok fine, these are the stock standard classes you’ve come to expect from Hearthstone, from Druid through to Warrior. Once that all difficult decision has been made (Mage. Duh), you’re given a tiny pool of health, a collection of cards for ants, and you’re then booted down into a deep dark tunnel to search for some treasure.

What you’ll find instead (spoiler alert) is a boss, and another, and another, each getting progressively harder. Dungeon Run features 48 possible encounters, so you never quite know who, or what you’re going to get, or what they’re capable of the first time around. 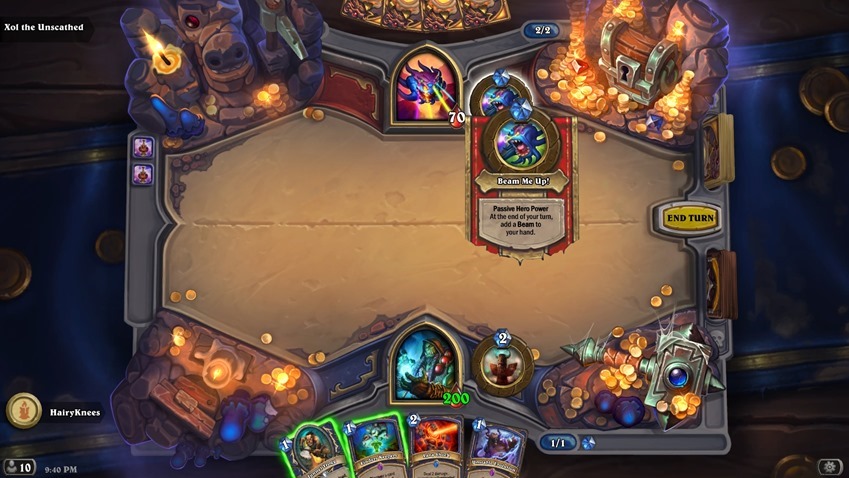 Don’t worry though, there are a few things that’ll keep you fighting fit as you venture deeper into the darkness. You start the run with a bare-bones selection of cards, but after each victory, you’ll get to choose 3 more for your deck, from 3 random mini-packs.

If you’re playing Mage for example, you could choose something that favours a deck built around secrets. Or maybe you want something that’s packed with spells? That’s up to you to decide. 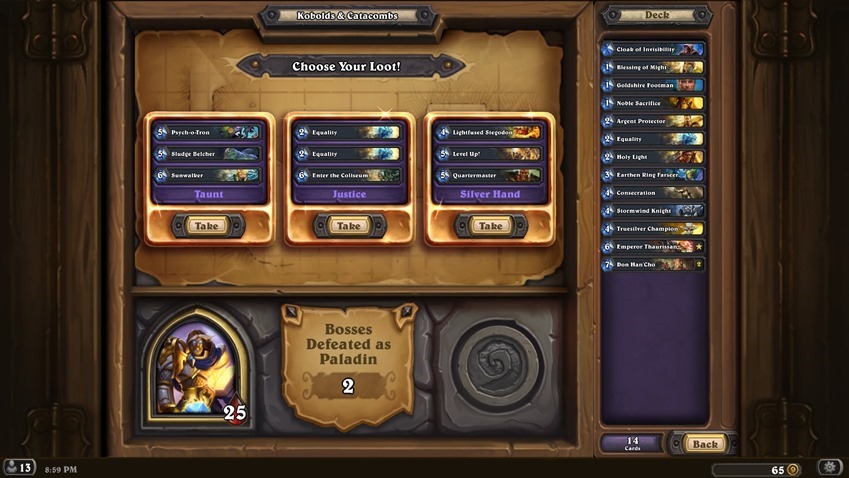 On top of this, on certain levels, you’ll get to choose a handy passive or a helpful treasure to help you on your way. My favourite with the former thus far has been one that doubles your hero’s starting health, and the latter, a spell that casts pyroblast (10 damage to a target) randomly and repeatedly until a hero dies.

That particular spell is best saved for desperate times, or a glorious play of epic proportions. For the record, it’s never once worked out for me, especially not on that one time when I was on the very last boss and the odds of things going in my favour were high. I’m not salty about it or anything, not one bit. 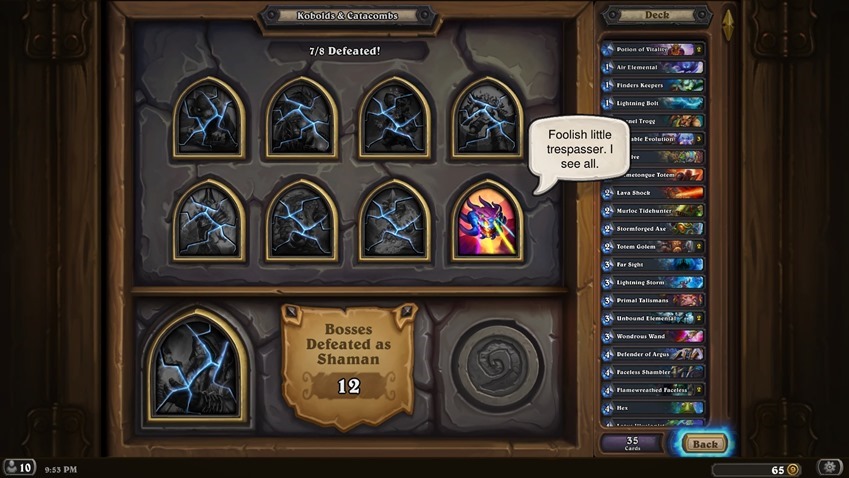 A visual representation of anguish. And sadness. And heartbreak. And *cries*

When you die in Dungeon Run, and trust me, you will plenty, you’ll need to start the entire process again from scratch. It’s a disappointing feeling to be sure.

But then that sense of adventure kicks in afresh, which is why I’ve found myself playing the mode over and over again. Maybe this time, this time, I’ll reach the end thanks to the Shaman and his totems. Or perhaps the path to victory lies in the Rogue and her sneaky mechanics? No, it definitely has to be Warrior and his durability, to survive whatever even the nastiest foe can dish out! 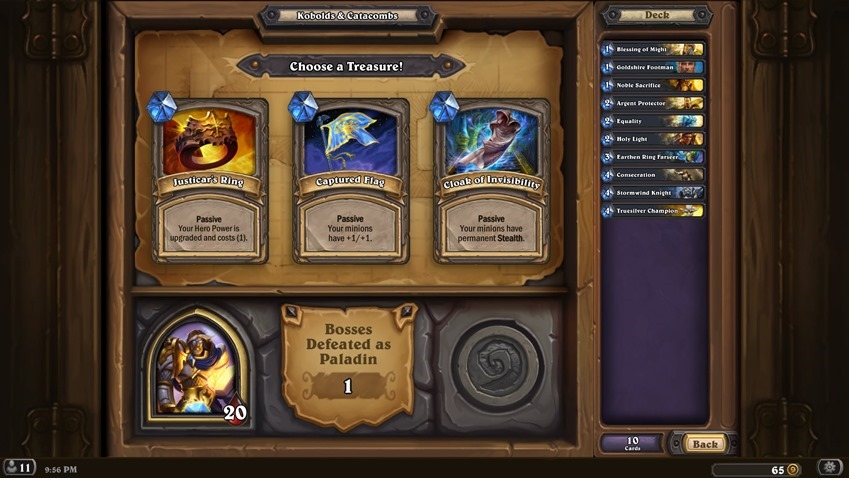 Honestly, I have no idea what the secret to success is, but I’m having a damn fun time trying to figure it out. I really think you might too, if you haven’t already gone full Indiana Harrison Jones. If you haven’t, know that Blizzard have created some magic with Kobolds and Catacombs. I can’t speak for the competitive side of things, but I do know that the included single-player mode is a splendid little piece of content.

And at the price of free, it’s definitely a roguelike (with a cardy twist) worth dabbling with. Even if the urge to flip a table does surface every now and then, you’re sure to find some joy in this new Hearthstone expansion.