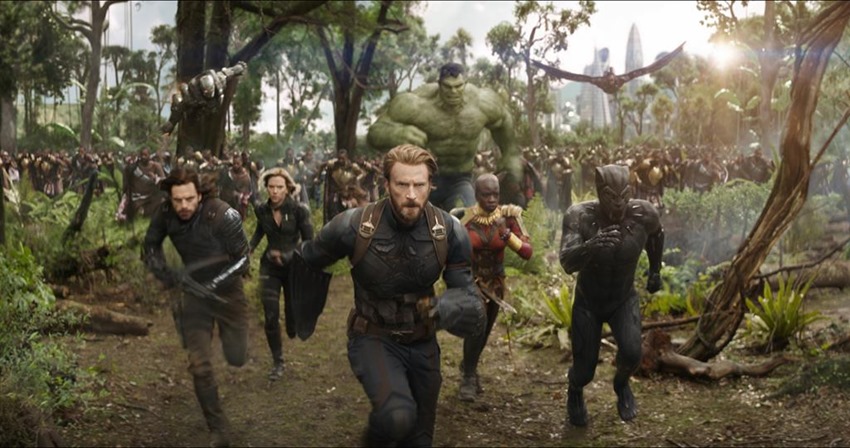 The word “epic” gets thrown around a lot when it comes to modern-day blockbusters, its impact diluted through frequency. Avengers: Infinity War is here though to remind us exactly what epic –  or rather, EPIC! – actually looks like. Through 10 years, 18 movies and 3 phases, Marvel has been strategically moving all the pieces of their universe around the board to get to this point. And now, with a bejewelled gauntleted hand, the studio is not only upending the board but smashing it and all those pieces in a jaw-dropping bombastic display of comic book superhero filmmaking. Thanos, the hulking, purple-skinned cosmic despot who has spent the better part of the Marvel Cinematic Universe’s existence being teased as its ultimate Big Bad, has finally arrived in full and nothing will ever be the same again. 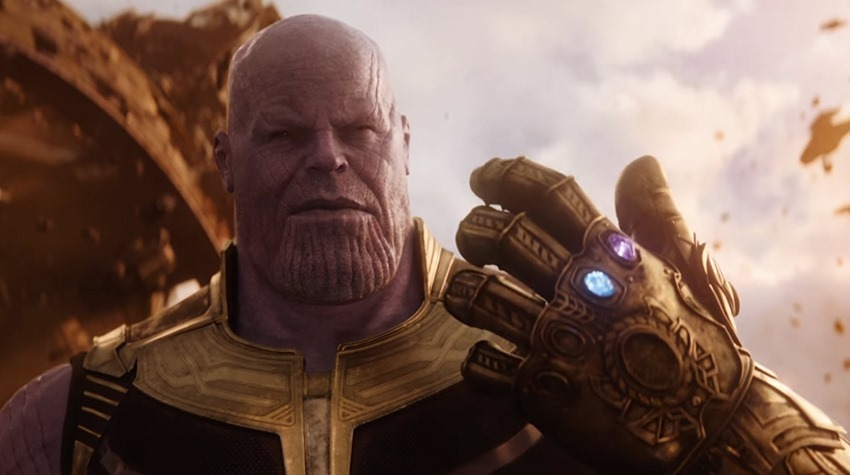 We’ve seen superhero ensemble smash-ups on screen before and there’s a lot about Infinity War that ticks the prerequisite Marvel boxes, but never before have the stakes been this high, the consequences this ruthlessly dramatic. Within minutes of the film’s uncharacteristically ominous opening eschewing the usual spritely Marvel fanfare, it becomes bone-chillingly clear that Thanos – and Marvel – is not f—ing around (to be appropriately blunt). This is bolder, more shockingly daring than anything Marvel has ever done, and across a thunderous two and a half hour runtime, co-directors Joe and Anthony Russo never let up that intensity.

Said intensity doesn’t just come from the propulsive physical action though, which delivers on a scale that makes the two previous Avengers films and Captain America: Civil War (essentially Avengers 2.5) feel like barroom brawls in comparison. No, there’s also the character drama that fuels it all, a large portion of which comes from Thanos himself. 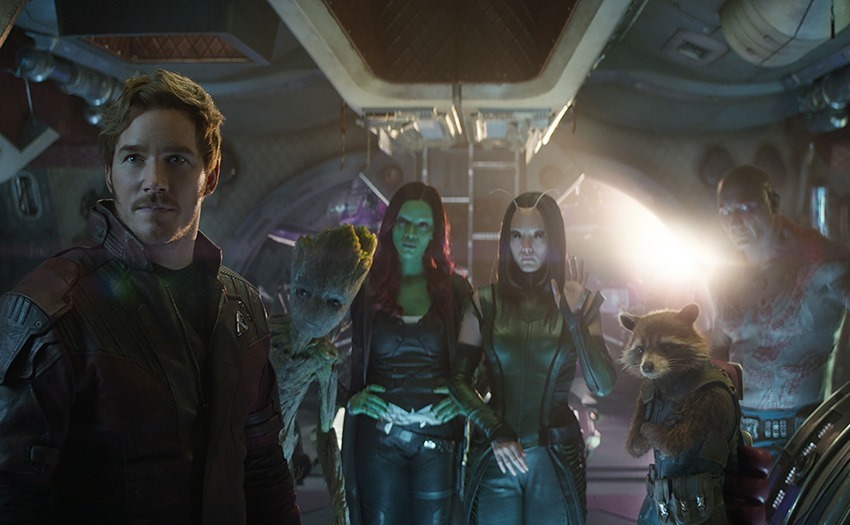 Realized on-screen as an 8-foot tall computer-generated creation – an approach which we’ve seen fail far too often in these types of films – Thanos was my biggest worry going into the film. My worries were for nought though as the Mad Titan is brought to life incredibly with an intensely quiet gravitas by Josh Brolin and the techno-wizards responsible for flawlessly translating his surprising emotionally complex performance. It’s that complexity of character that gives me pause to call him a  “villain”, as Brolin’s Thanos is very much the tragic hero of his own tale (I would even go so far as to say he is essentially the main character of this movie and absolutely owns it) instead of a moustache-twirling collection of pixels. And this sympathetic humanity actually makes his goals as absolutely terrifying as they are compelling.

Those goals, in this case, being simple: Thanos is seeking the Infinity Stones, six coloured gems which control the very forces that make up reality (Space, Time, Mind, Power, Reality, Soul), and he’s travelled from the outer reaches of the galaxy to the cities of Earth to get them. Now the Avengers, the Guardians of the Galaxy and Black Panther all have to band together to stop him and his powerful Black Order henchmen. 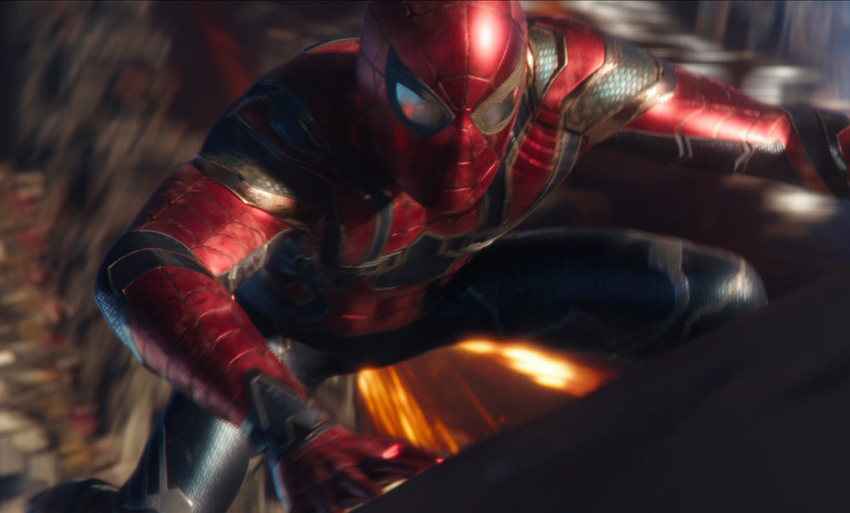 For all intents and purposes that is the entirety of the plot, but it’s a deceivingly spartan bit of scripting from screenwriters Christopher Markus and Stephen McFeely as the duo bounce their characters all over the cosmos to some surprising destinations. Most impressively though, the Russos, far removed from the real-world grittiness of Captain America: Winter Soldier where they began their Marvel tenure, now dive straight into comic book sci-fi territory and direct it all masterfully.

In fact, the filmmaking brothers do a fantastic job of seamlessly injecting the personal flavour and even colour palettes of all the various respective character franchises into Infinity War. The result is a film where the larger-than-life mythological trappings of Thor, the bleeding-edge techno-thrills of Iron Man, and the laugh-out-loud irreverent playfulness of Guardians of the Galaxy, all work side by side.

That disparate approach is carried through to the surprising ways the individual heroes team up and set out on their multipronged adventures as well. The clashing chemistry between Tony Stark (Robert Downey Jr.) and Doctor Strange (Benedict Cumberbatch) is a delight (especially considering both actors’ Sherlock pedigree). Thor (Chris Hemsworth), with his combination of familial drama and pompous snark, slides perfectly into the tongue-in-cheek mix of Star-Lord (Chris Pratt), Gamora (Zoe Saldana) and the rest of the Guardians.

Meanwhile, Scarlet Witch (Elizabeth Olsen) and Vision (Paul Bettany), still on the run after the events of Captain America: Civil War, have to put their burgeoning romance on hold as they join a disillusioned Captain America (Chris Evans), Black Widow (Scarlett Johansson), and Falcon (Anthony Mackie). Add to all of that Black Panther (Chadwick Boseman) and the warriors of the high-tech nation of Wakanda, Hulk (Mark Ruffalo), Spider-Man (Tom Holland), Wong (Benedict Wong), Nebula (Karen Gillan), Winter Soldier (Sebastian Stan), and War Machine (Don Cheadle), all with their own narrative threads. And unfortunately, with a cast as jam-packed as that, some (fan-favourite) characters get understandably underutilized. 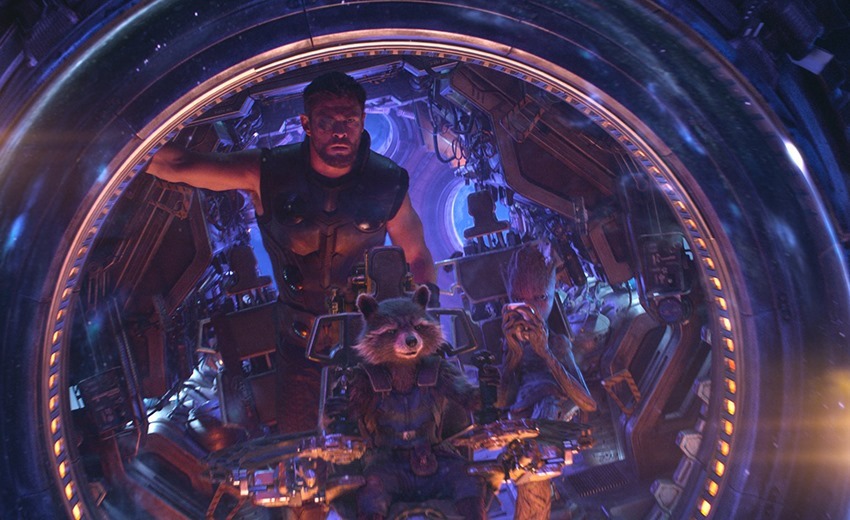 Even those that are utilized admittedly don’t have that much plotting beneath them except for thematic examinations on personal sacrifice and heroism. But that’s the secret to the success of the Marvel Cinematic Universe. Despite appearances, Infinity War is not really a single movie. We’ve had 10 years of character building, a decade of loving, loathing and getting to know these people, all leading to this moment. We don’t need reams of dialogue to dial us into their thoughts, to get us invested in the fates of these characters, because we already are. Deeply. Which is what makes the palpable sense of life-threatening dread never before seen in Marvel’s films so potent here.

That was, after all, the entire goal of Marvel’s ballsy experiment in Hollywood studio filmmaking with its ambitious design of years-long over-lapping storytelling. As Doctor Strange remarks in the film, “This is the end game now,” and the payoff could not be bigger as the closing moments of Infinity War may arguably be the best in the entire 19-film franchise’s history. The fact that almost everything (slight irsk found in a few brief bits of dodgy background CGI, and character moments I wish the movie lingered on just a bit more) that comes before it is equally as thrilling, meticulously engineered, and emotionally poignant, is nothing short of miraculous. 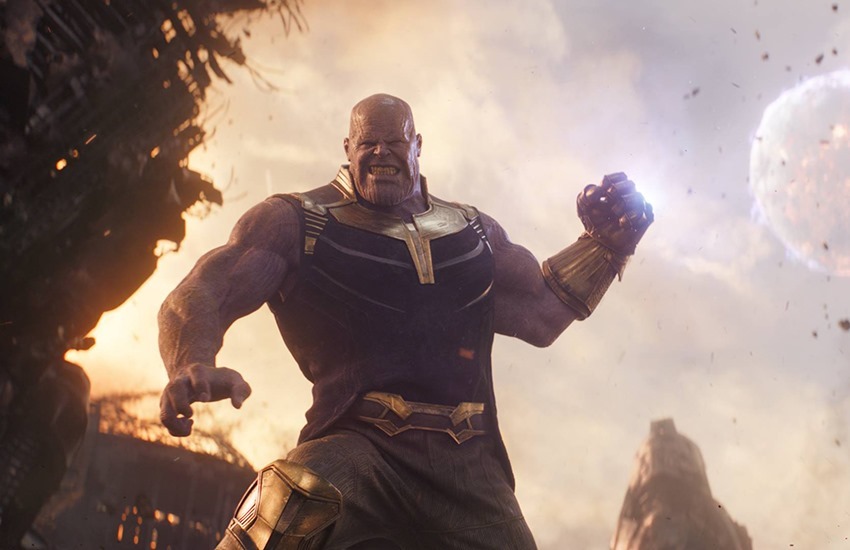 What Marvel has managed here is a feat which looked every bit as insurmountable as the very challenge faced by the heroes in this cosmic slobber knocker. After all, how often do these things, hyped to the nth degree over years and years, actually live up to expectations? Not only does Thanos and all the universe-threatening bedlam he brings with him actually meet those expectations, but they utterly obliterate them in ways we couldn’t even have predicted. That wait for next year’s Avengers 4 suddenly feels like a lifetime away. Anybody have a spare Time Stone?

PS: This should go without saying by now, but make sure you stay until the very end of the film’s credits. 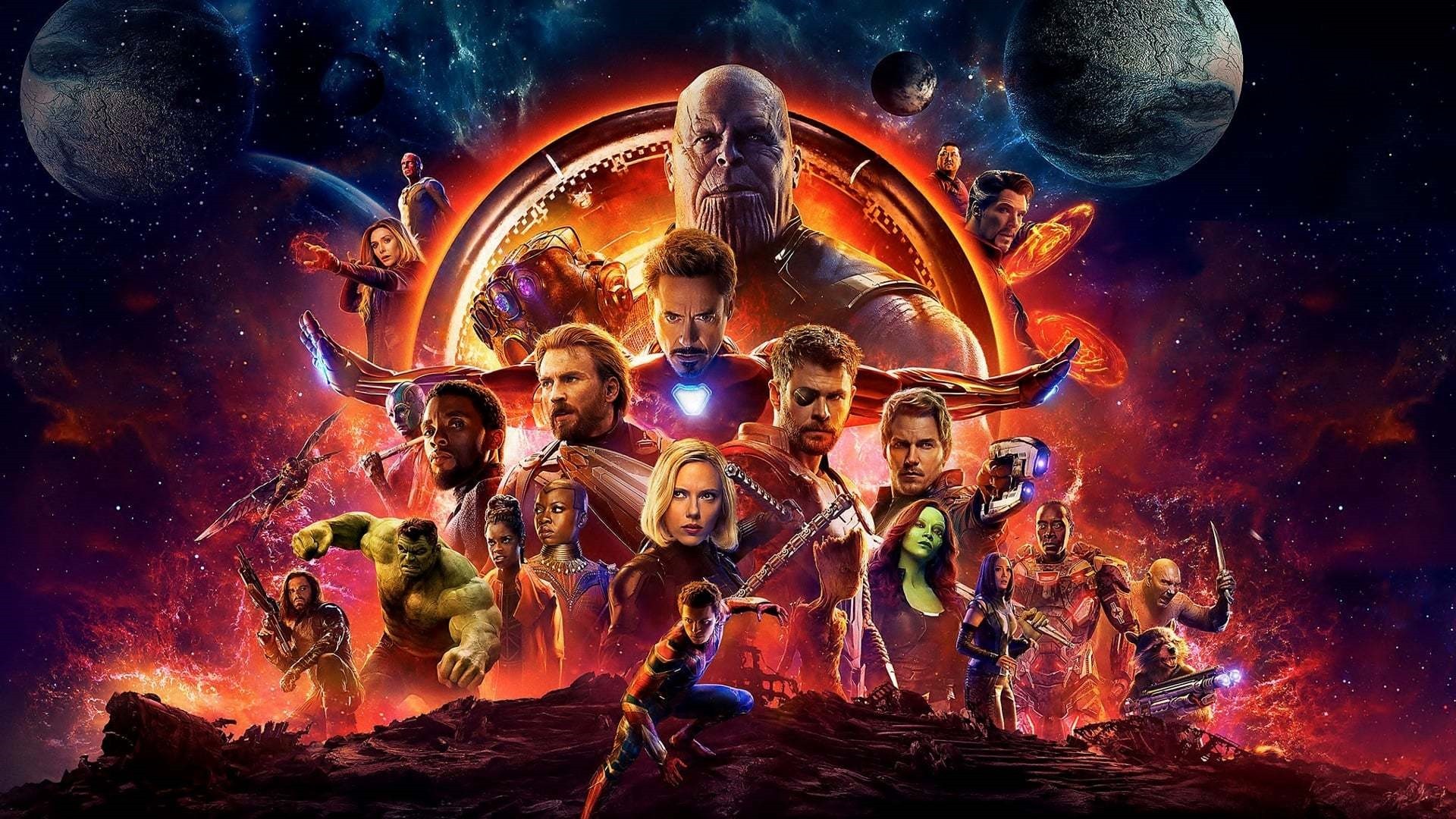