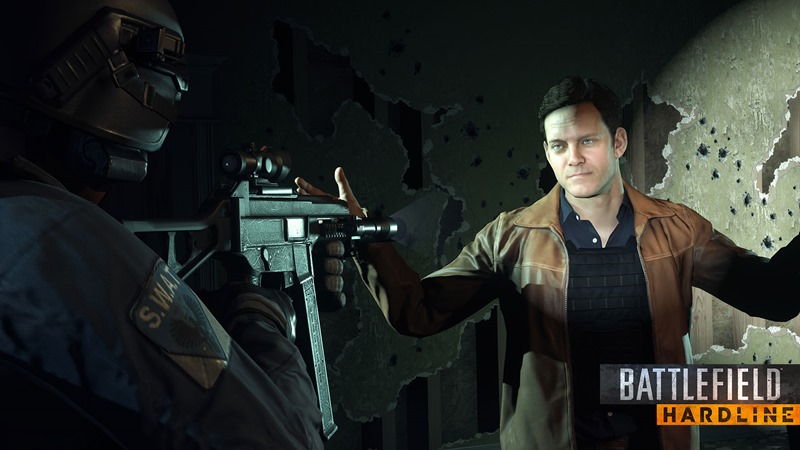 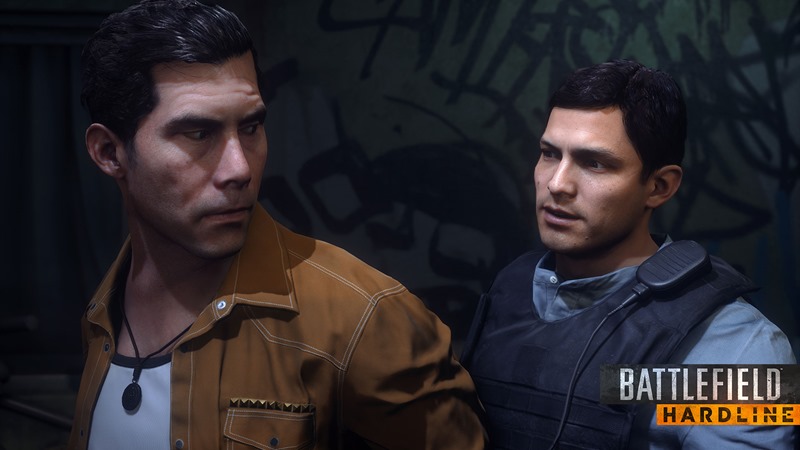 Battlefield 4 may have been a disaster at launch, a next-gen title with heavy graphics and even heavier bugs that resulted in frequent updates to a game that had clearly been rushed out before any real quality testing had been done, but it did have a positive side effect. And that’s creating a savvier customer who was wary of week one launches. 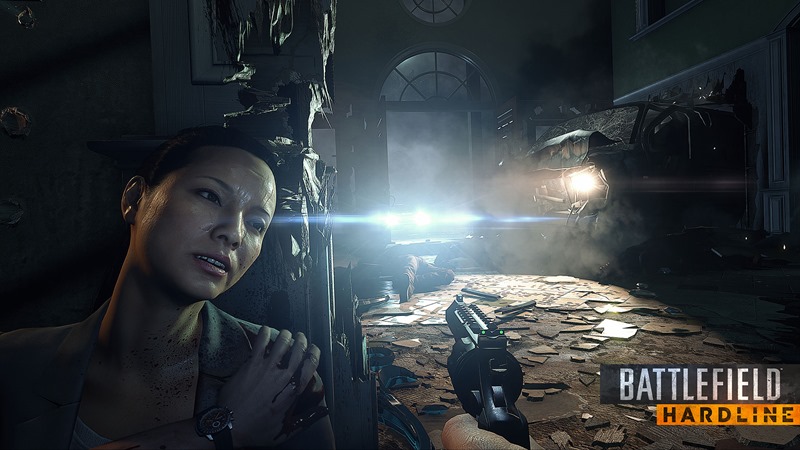 And what a cheesy product it is, a game that is dangerously close to being harmful to anyone who is lactose intolerant. You’re cast in the boots of Nick Mendoza, a bland Cuban immigrant looking to serve the public as a fine member of the Miami police force. There’s a drug war going on in Miami, cops are dirty and Nick’s partner is a grumpy Kelly Hu who clearly needed money more than pride at this point. 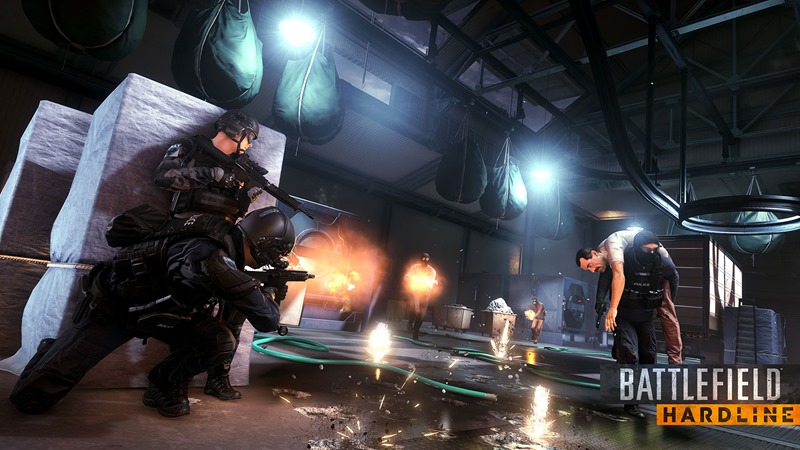 It’s up to you to stop the drug trade, take down the perps and run into plot twists that are more telegraphed than an RKO outta nowhere.

And really, the game drops the ball and then some in terms of a single-player story. Cops aren’t exactly well-liked these days, due to the fact that they’re armed with enough weaponry to overthrow a small nation, the escalating militarisation of their actions or just some downright deplorable and despicable behaviour as we’ve seen in Ferguson, and elsewhere, lately. 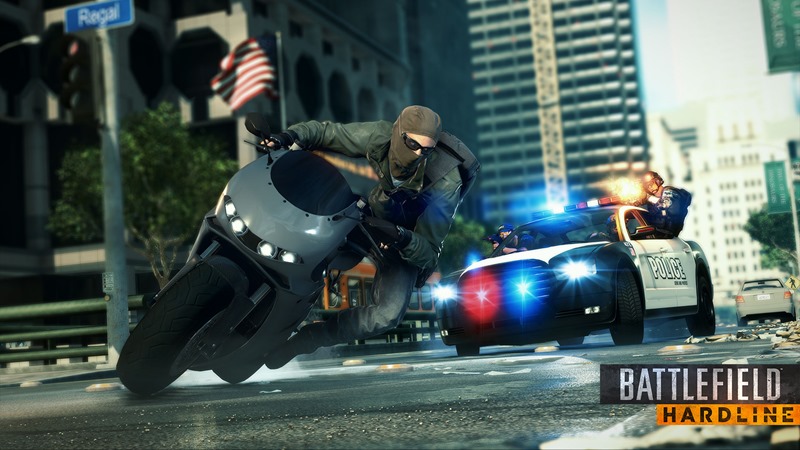 And I get that, that’s Ok. There’s a missed opportunity here to spin a story that touches on recent events and controversies within the American police system, from Ferguson to just about any racially-motivated shooting in the last couple of months.

But doing so would have derailed the entire story, which has been in development for many months by now. You can’t expect development on a game to always be socially relevant and timely. But what Hardline does, is attempt to tow both sides of the blue line of justice entertainment. And it’s an approach which just doesn’t work. 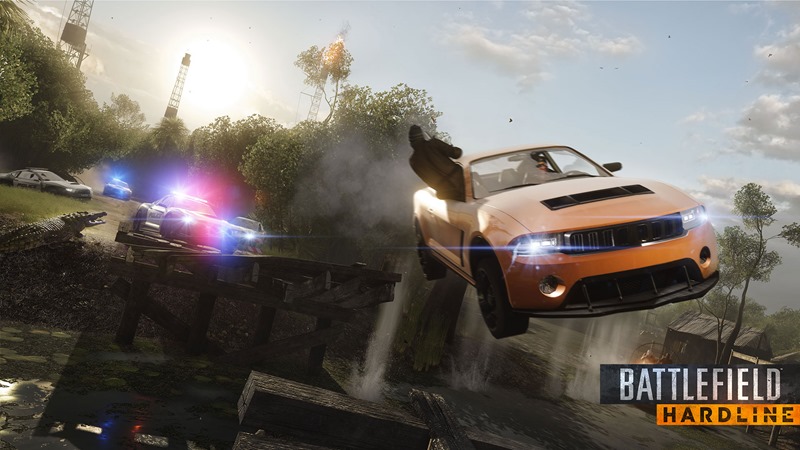 It’s a game that wants to be both The Wire and Bad Boys. It’s naturally a terrible idea, as combining those two elements of cop movie entertainment is like wondering why you can’t get blood stains out of your carpet with red wine. The story plods along, slowly building up until you’re about to pass out, then finally giving you an excuse to arrest some suspects or save yourself some paperwork by reading them their Miranda rights with several highlighted bullet points from your guns. 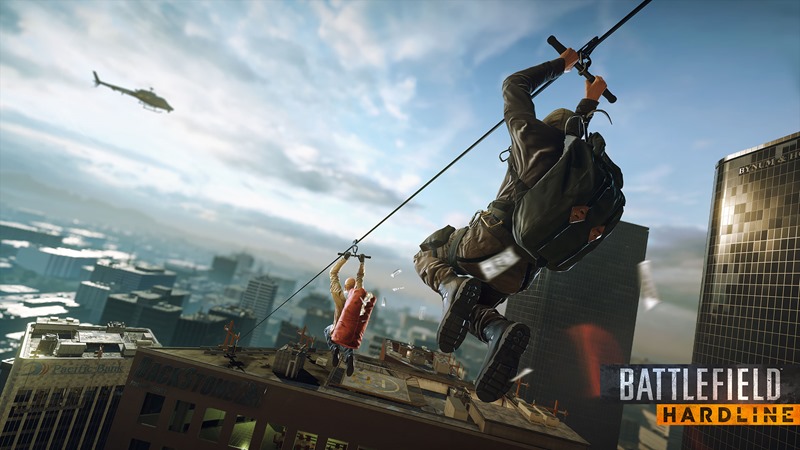 There’s two sides to the Hardline experience when you’re finally allowed to uphold the public trust. You can go in cleanly and quietly, flashing a badge and magically freezing up to three perps at a time and arrest them one-by-one while your partner keeps an eye on them, in a mode that borrows heavily from Far Cry. Your police scanner can highlight criminals, provide intel on cases to investigate and single out suspects who offer higher experience points rewards when properly arrested. It all adds up to character progression which allows you to harvest better guns with which to kill, and earn more points in a vicious never-ending circle of violence that would make Robocop proud. 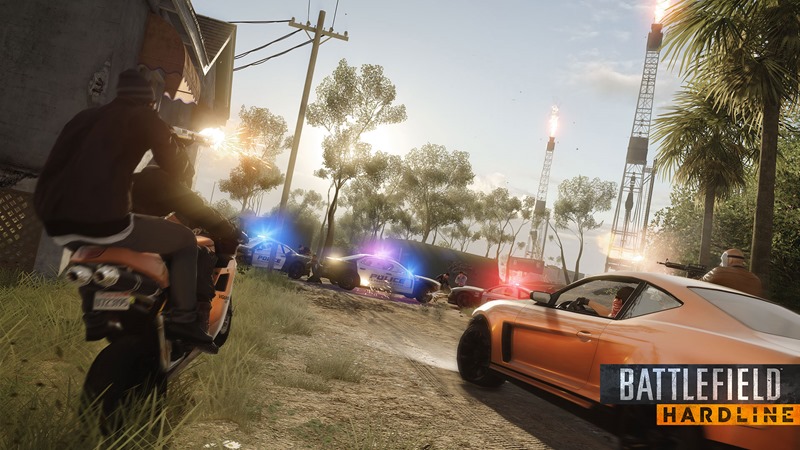 And it’s…alright. Hardline never feels like more than your stock-standard shooter even in the most frenzied of firefights. It neither excels nor dips below your expectations, feeling accessible but never exceptional. It does have some of the finest acting ever seen in a video game, or at least properly captured acting thanks to what must have been some incredibly expensive technology. The episodic touches are also rather spiffy, with animated intros and outros that try and impart a sense of high budget TV action to the player.

But all that bombast, and all the fanciest tech from EA and DICE can’t save it from being an otherwise boring and unimpressive attempt to not be a Battlefield game. And then there’s the multiplayer side of Battlefield: Hardline. A component of the game that is…actually really damned good. 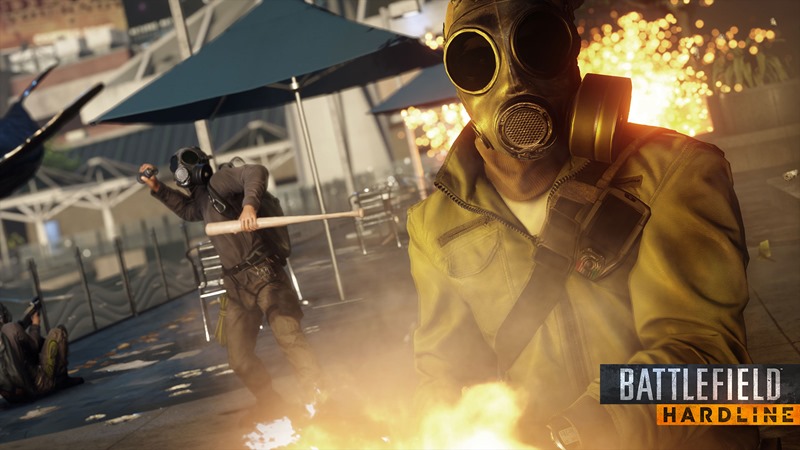 It’s the cleaner, shinier and newer side of Battlefield, and it shows. EA had a lot to answer for after the massive letdown that was Battlefield 4. A legendary example of how not to launch a game with a heavy online component, Battlefield 4 is still spat on to this day. Hardline’s multiplayer however, makes up for the sins of the past, and then some. 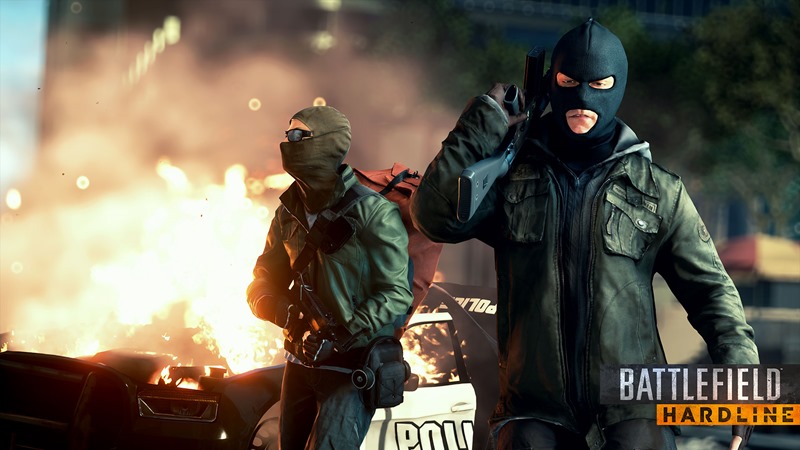 Every night since getting the game, I’ve been hitting online lobbies, waiting for more players to have the game and spend their weekends on it. That’s a proper stress test right there, and the game passed with flying colours. There are of course some small niggles here and there, but hardly of the game-breaking variety that characterised Battlefield 4. Games are smooth, connections were constantly maintained and joining a lobby was as quick as greased lightning. 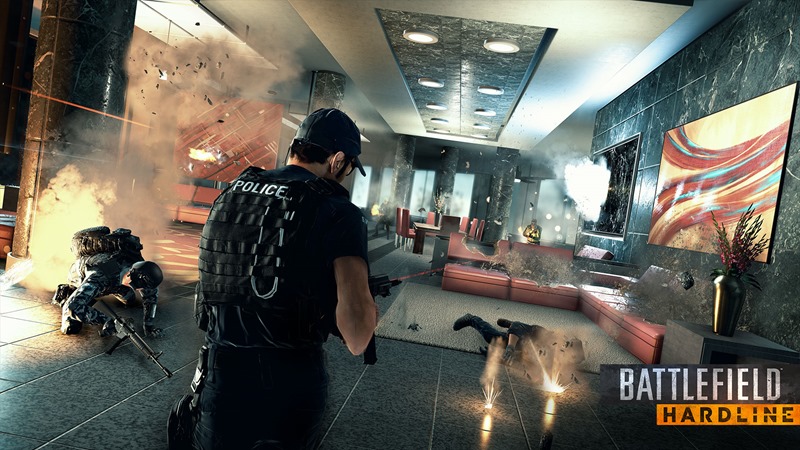 Battlefield: Hardline boasts a superb online game that talks the talk and walks the walk. If EA can keep things smooth like this, Battlefield 4 won’t even be a bad memory. With the cops vs. robbers theme firmly in place, Hardline has a few neat gameplay modes on offer. Heist has you breaking into banks and taking down armoured cars as the criminals, while cops have to assemble and stop the crooks from getting away with the cash. It’s essentially a new variant on Capture The Flag, that is further explored in Blood Money, a mode with higher stakes and more movement. 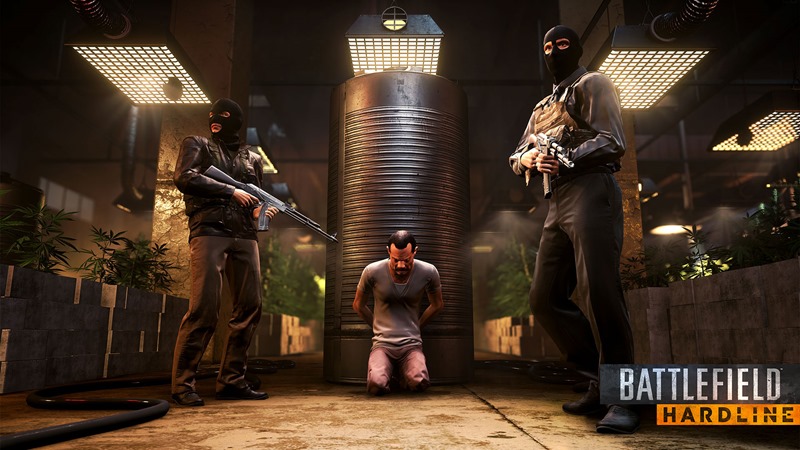 Hotwire is  a mixed bag of ideas. You’re stealing cars and tankers, driving them back to your base and earning points as you attempt to reduce the ticket score of the opposing team to zero. It’s crazy, frantic and dangerous but the actual maps on offer are either too large or too small. Still, overlook that flaw and Hotwire is easily the best new multiplayer mode to hit Battlefield in many a year. 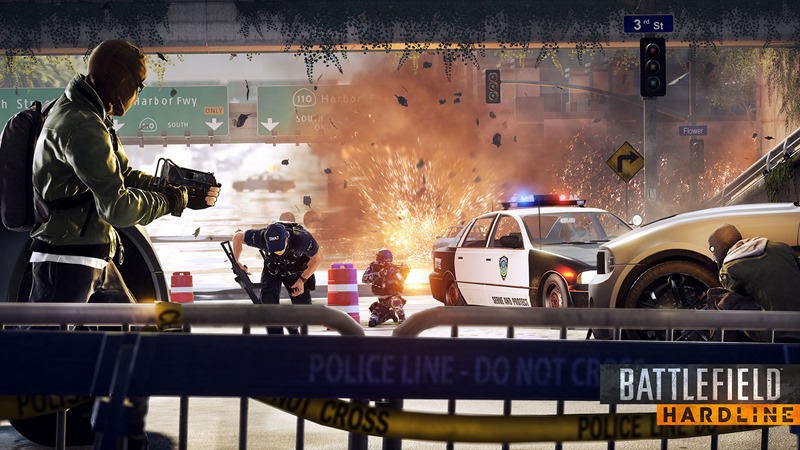 And then there’s Rescue. Eerily familiar to a certain Counter Strike mode, players need to rescue hostages while criminals need to keep them around long enough for Stockholm Syndrome to set in. You’ve got one life to live in this mode, making for a tense and nerve-wracking experience. Rounding out the multiplayer additions comes Crosshair. It’s easy enough. You’ve got three minutes, it’s five on five and there are no respawns. The catch here is that one of your players happens to be a VIP who must be kept alive at all costs as the cops escort him into witness protection, with the criminals looking to subpoena the state witness with a legal waiver of live ammo to the face. 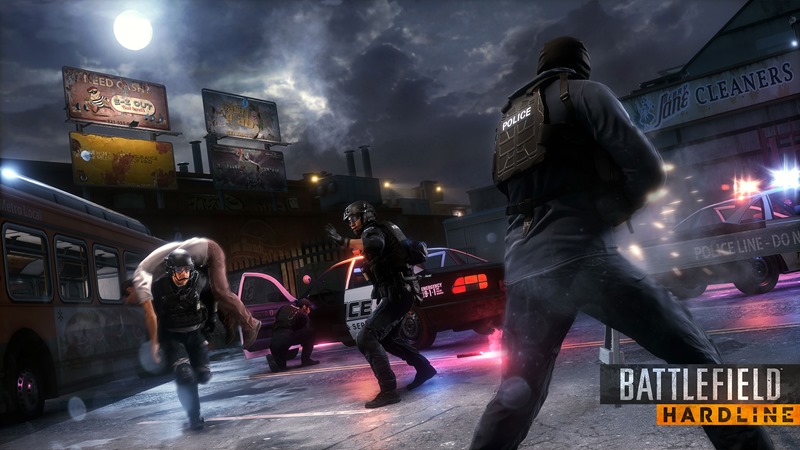 Overall, Hardline’s multiplayer is a smaller, more intimate affair of guns and grenades. Maps aren’t as massive as the large military playgrounds you’d find in older Battlefield games and vehicles are now more limited. There’s still some of that fancy Levolution tech to see which renders in some fancy environmental effects that change the game up, and player progression is now linked to how much cash you can bank. Earn enough, and you can buy the weapons you want instead of grinding through a particular class. That means more meaningful games, at your own pace. 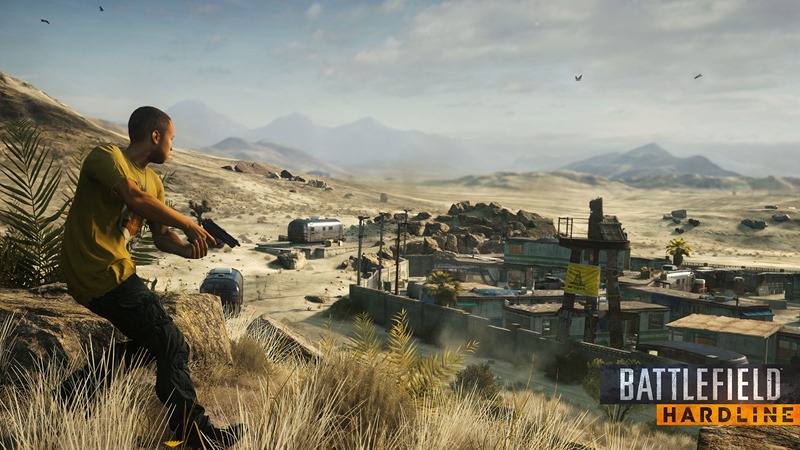