There’s little that still needs to be said about the original Bayonetta. Platinum’s action game under Hideki Kamiya has been available on just about every platform – and, barring its legendarily rubbish PlayStation 3 port, has shone brightly. It’s a game that took the action of predecessors like Devil May Cry, threw in an even more ridiculous tory, and dialled the insanity to eleven. 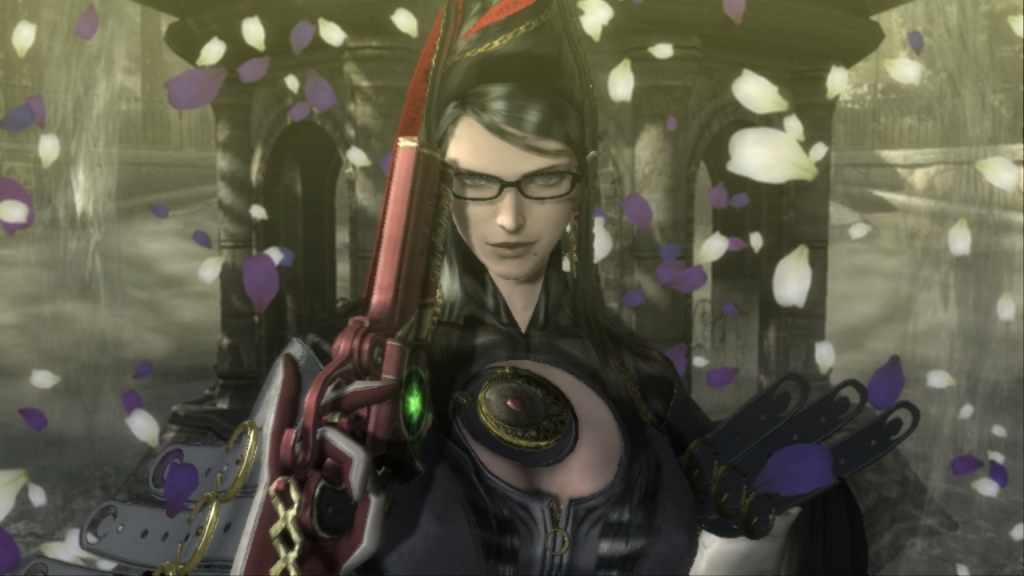 It’s a game that as a series, would no longer exist had Nintendo not stepped in, and now it makes its appearance on Nintendo’s Switch. Available as a standalone download or as a bundle for those who purchase Bayonetta 2, the titular Umbra Witch makes her Switch debut.

In an almost incomprehensible tale about battles with heavenly hosts, Bayonetta  – supernatural exterminator extraordinaire – is out to regain her memory and take on hordes of angels in a battle for the fate of the world. Bayonetta’s story is really secondary to the action, which sees the Witch use all manner of unlockable guns (affixed to all four of her limbs) in her pursuit of the past. 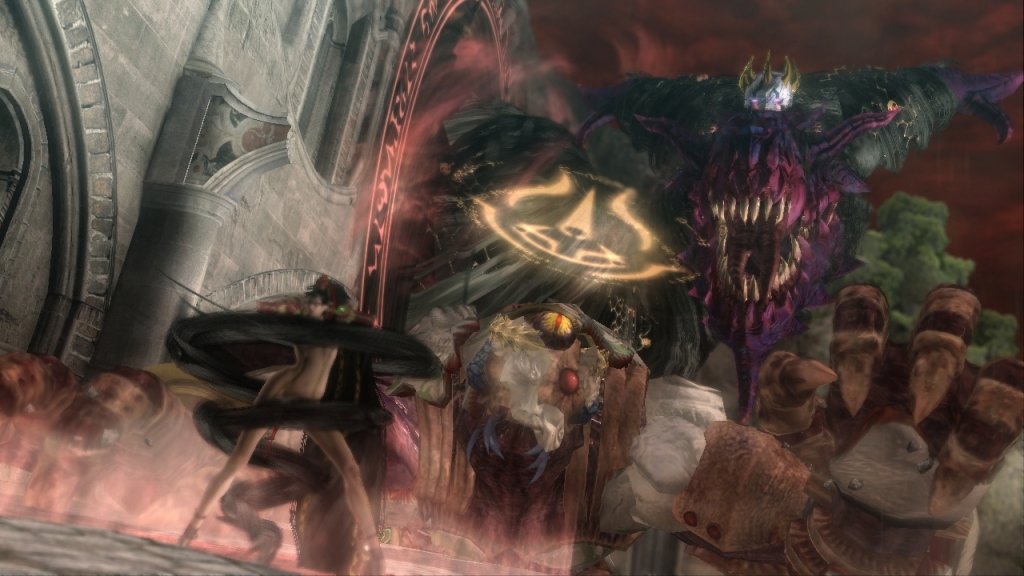 In addition to armament, she also utilises a cornucopia of combos, giving us a game where the flow of combat – between frenzied and flurried offence and perfectly-timed defence – is key. It’s a beautiful ballet of bullets and brawling, and remains one of the finest action games ever made.

Its Switch port doesn’t really offer much new though. Aside from its flawless 60fps presentation, Bayonetta is starting to show its age. And while it runs like buttery magic on the system, it can become a little hard to see exactly what’s going on when sprawling fights take over the little screen.

Still it’s Bayonetta, in your hands, and that’s amazing. If you’ve played it before, especially on the Wii U, then you know exactly what to expect. If you haven’t? Well, then there’s one of the finest games in its genre waiting for you. 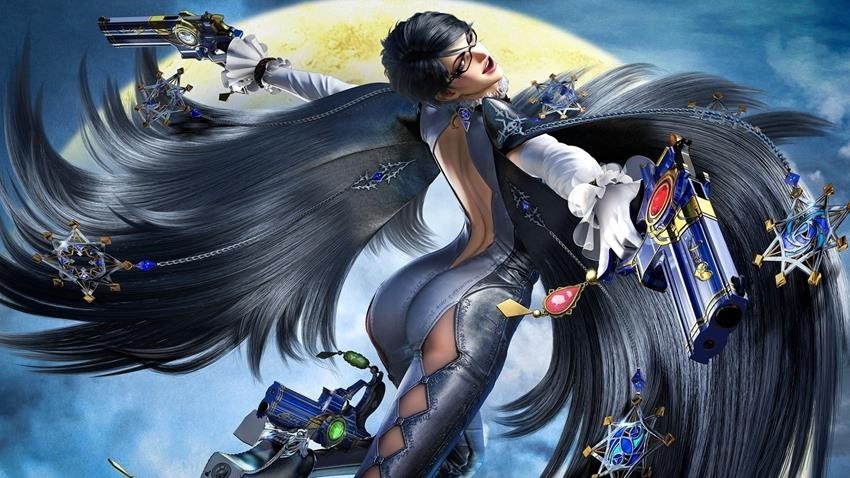 As stylistic as it was sublime, the original Bayonetta is a lesson in tight design. Its variation of weapons coupled with an increasingly complex combo system made it a hack and slash adventure that put Platinum Games in the spotlight. It was over the top in all the best ways, ridiculous in all the rest and balanced the two with finesse. So if you’re building on an original formula that strong, it’s hard to improve. But oh boy does Bayonetta 2 do that oh so very well.

It’s a matter of improvement over reinvention. Refinement in all the best ways. Bayonetta 2 reintroduces you to everyone’s favourite Umbra Witch (she’s even going by the name Cereza now) not too long after the events of the first game. Being in possession of the Left Eye of Darkness doesn’t mean she can stay shopping around for Christmas gifts for too long though. Before you can remind yourself of just who the hell Enzo is and why he’s involved with the forces of Heaven and Hell, you’re watching sports cars drive up the sides of skyscrapers, doing battle on screaming fighter jets and slaying angels like they’re going out of style. All within the first few moments of the game. 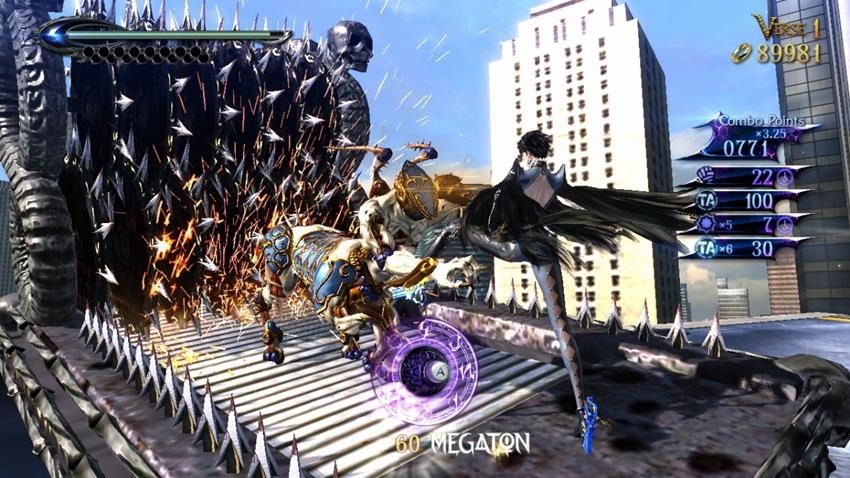 Bayonetta 2 exudes a sense of confidence from the get-go that it’s hard not to become intoxicated. And it does relatively little hand holding. While there’s still the neat pause for a tutorial on its fighting system (you get one button for punches, another for kicks and an entirely different one for your pistols), the combinations they entice you to create are left up entirely for you to experiment with. And it’s hard not to, especially when you see Bayonetta summon demons from hell after landing a flurry of kicks to the multiple jaws for your foes.

Bayonetta’s best attribute has always been its incredibly rewarding combat, but it’s the way feedback is given to you that puts it over the top. No matter how fast you’re pulling off massive combos and hopping to and from foes, every single hit feels like it shakes you to your core. The involvement of demons mid-combo or the way you can start chaining these together makes even the most rudimentary strings of button presses feel impactful. And the deeper you dig, the more rewarding a perfect performance becomes when you see your score after each and every bout. 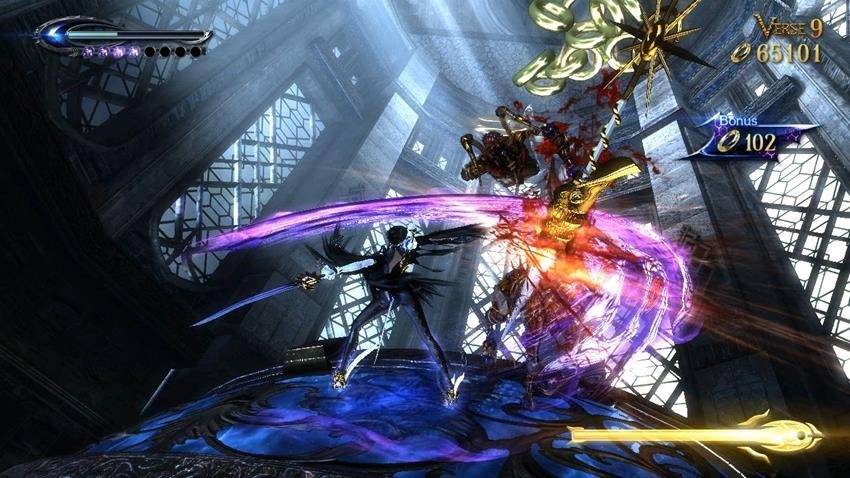 This depth of combat grows as you start adding to Bayonetta’s arsenal. You unlock only a handful of alternative weapons throughout the main campaign (which tie into some neat collectible hunting, alternative encounters and special combat stages that really test your reflexes), but even they work in ways that you might not expect. Considering you can equip most weapons to either your arms or legs, the different combinations start showing their colours after a little bit of tinkering.

Having long reaching blades on your arms and slower, harder hitting fire and ice cannons on your boots can create some explosive close quarters combat with the reach of striking back when the action gets a little too hot. Giving yourself the option to pull off some breakdancing with your firearms and launch foes into the air works well with the heavy hits that you’ll need when you’re beating foes up close and in mid-air. Bayonetta 2, like the original, gives you the choice to have two setups to quickly pick from on the fly. And switching them up mid-combo is captivating, even when chaos is ruling the roost. 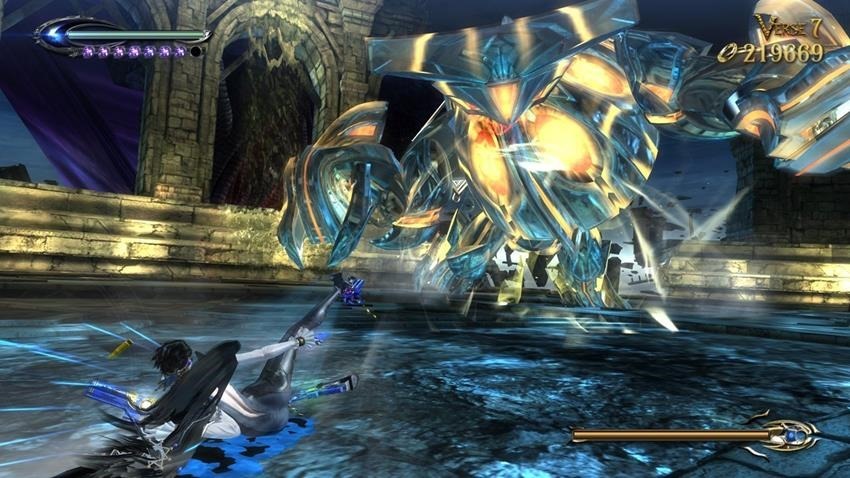 None of this feels overwhelming at normal speed either, but it takes on another sense of satisfaction when going a little slower. Witch Time can be activated by dodging an enemy’s attack just as it might land, briefly pausing time and giving you the ability to reposition and pull off one devastating combo. This gives the flow of combat an elegance, one that can hop between real-time and slow motion on a dime. It feels pulsating to watch an attack come in from your peripheral only to dodge them and counter at a moment’s notice. A feat which is compounded by the otherwise breakneck pace that combat usually employs.

None of this would matter without encounters that truly test your reflexes and prowess. An asset that Bayonetta 2 actually improves on from the original. While Platinum Games’ initial work did bring a delightfully twisted array of angels and demons to fight, its sequel ups the ante with respect to their combative differences. It was common to find myself facing a new foe and struggling to adapt to its new pace or skillset. Whether a grotesque demon with tentacle-like appendages was bringing me new meaning to dodging or a massive sword-wielding angel was giving me crowd control issues, Bayonetta 2’s variety in enemies is admirable, and one of the game’s strongest features. 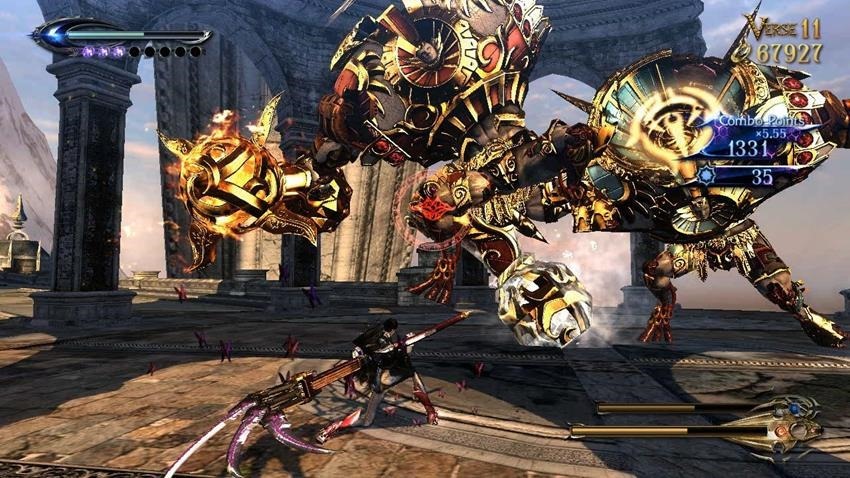 But even that somehow pales in comparison to its incredible boss encounters, which hit the ground running from the moment the game start. Every single one feels like it could stand as the final showdown in both scale and intensity.

An early encounter sees you clashing with the yin to Bayonetta’s yang. You’ll soar in the skies as you clash with the angelic figure, all while your two massive summons battle it out in the background. It felt like an appropriate way to end the game, but it only came in on the third chapter the game had to offer. Less than an hour in. From there it just continues to improve somehow, and each new encounter makes the last feel almost underwhelming in comparison. Yet with the constant desire to one-up itself, Bayonetta 2 keeps things manageable. There are no difficulty spikes or unruly mechanics to adapt to with no notice. Just a gentle curve that tests your understanding of its systems.

The Nintendo Switch does a great job of keeping up to. Despite running at a locked 720p on both handheld and docked mode. Bayonetta 2 looks crisp. It’s aided by inspired art direction, which brings to life fictional, European feeling cities that scream opulence, only to have it contrast with the twisting vines and pulsating horrors or hell. Bayonetta has done a great job in the past of adapting its lore into some uniquely designs, and its sequel doesn’t drop the ball in the regard. 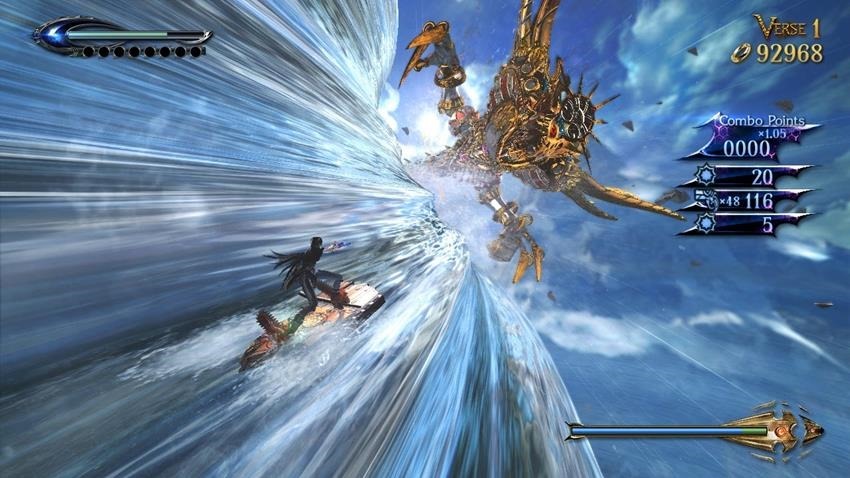 Still, it’s not a title you’re going to be rushing to show off the power of the Switch with. Bayonetta 2 still came out on the Wii U, and little has been done in terms of a raw asset upgrade. What has improved, however, is its stability. The game runs at a near rock solid 60 FPS in docked mode – a feat the Wii U didn’t come close to – and manages to maintain a higher than expected average performance in your hands. It’s not the uncompromised smooth experience on the go, but it’s certainly a ways ahead of the original release. And for a game as fast and furious as Bayonetta 2, that counts for a lot. 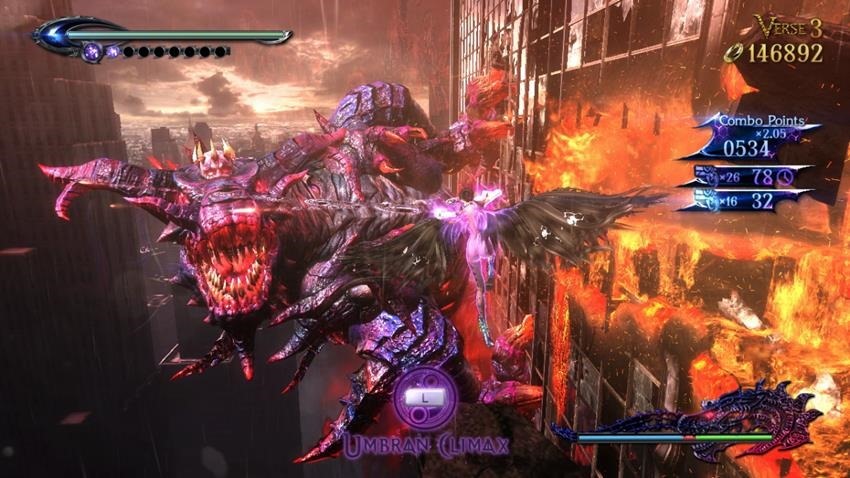 If anything, Bayonetta 2 is a reminder of just how well Platinum Games can hit the high notes on their best day. Its combat is riveting from the start and contains enough depth to wave off any temptations to stick with the same combos. New weapons and enemies to test them on push the limits of your button mashing finesse, while its explosive climatic battles and numerous boss fights dazzle in both execution and spectacle. Bayonetta 2 is a game that was forgotten by a console that nowhere near enough people had. But on the Switch, it’s really finding new life.