From the mind of Hideki “Devil May Cry” Kamiya came Bayonetta in 2010. Flashy, cheesy and packing plenty of punch per wicked weave combo, the game turned the action dial to 11, making its predecessors in the genre look tame by comparison. Fast forward a few years, and not only is Bayonetta returning in a much-deserved sequel on the Wii U, but the titular witch is getting her original adventure upgraded for a new console ride as well. 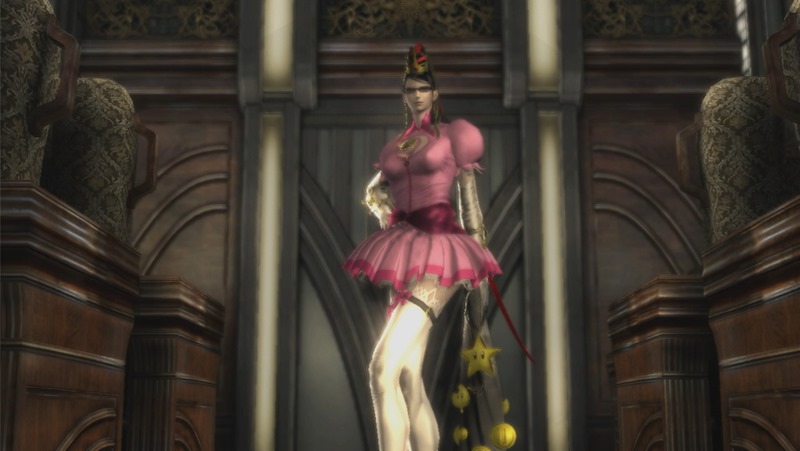 Let it not be said that Bayonetta is a game that places an emphasis on realistic and gritty story-telling. There’s an absurd story at play here, detailing the rise and fall of the Lumen Sages and the Umbran witches. Each clan once possessed the Eyes Of The World: planet-shaping objects of supreme power –  and the two eventually went to war with one another in a battle that was filled with plenty of mutually-assured destruction. 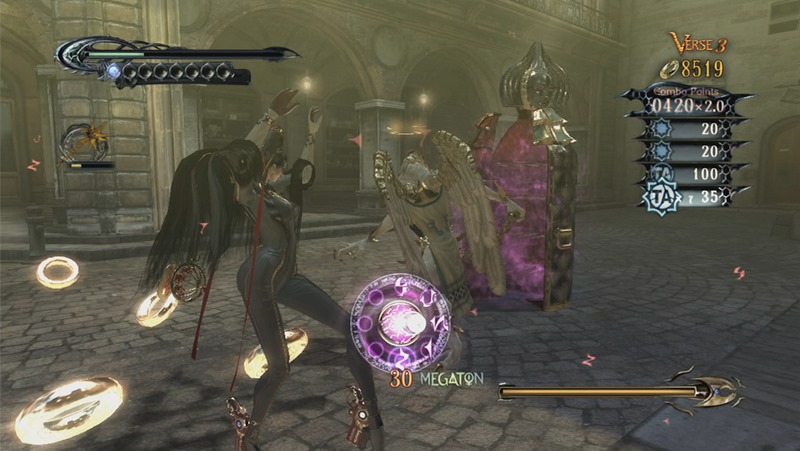 Enter Bayonetta, the last of the Umbran Witches, who has been plying her trade as a supernatural exterminator in the two decades since she awakened with a bad case of amnesia. Caught in a fight with the heavenly host of Paradiso, Bayonetta has to embark on a quest with the fate of the world and her memories in the balance. Along the way, she receives able assistance from the demonic weaponsmith Rodin, the goodfella wannabe Enzo and the lame love interest Luka, who has an axe to grind with Bayonetta. Oh, and there’s also a little girl by the name of Cereza who pops up during the adventure…who happens to bear a rather striking resemblance to the lethal witch. 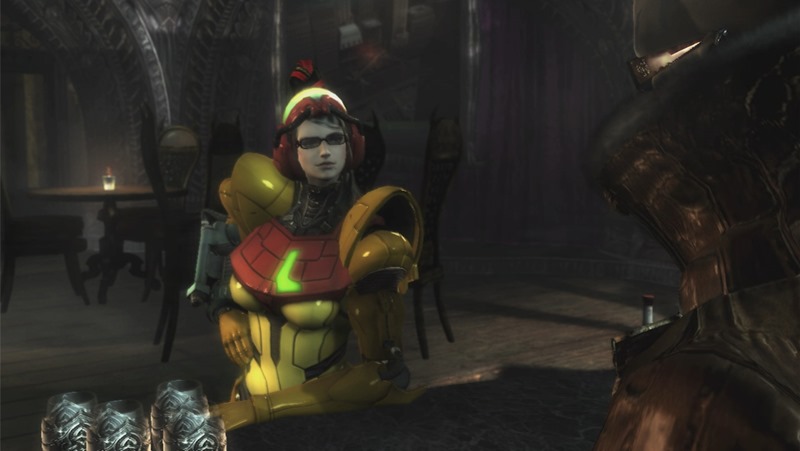 To flesh the story out, there’s a mixture of techniques spread between missions and battles. Fully animated cutscenes mesh with film strip sequences which complement the narrative rather well. Get the popcorn out however, because there’s a lot of story to tell in Bayonetta, with half the game easily being devoted to these sequences. As cheesy as they may be, they’re decently presented and they at least serve their purpose of giving a player enough exposition as to why you’ve just slammed a motorcycle into the face of a massive angelic god before pummeling it even further.

There are some fantastic set-pieces in Bayonetta, where developer Platinum games flexes all of their outrageous muscle in order to craft an adventure that escalates rather quickly, and then some.

Bayonetta may boast an unconventional story, but its level design is as orthodox as can be. You’ve got a wide number of stages to get through, with point A and point B being definitively mapped out for players, with your progress tied heavily into the narrative of the game. There’s a very standard formula of rinse and repeat present here, as battles with Paradiso agents are bookended by cutscenes and more narrative. You’ll brawl with a few angels, take on a gigantic boss, get graded on your ass-kicking and watch a few cinematics. Repeat ad nauseum –  but thankfully, these cutscenes can be skipped. 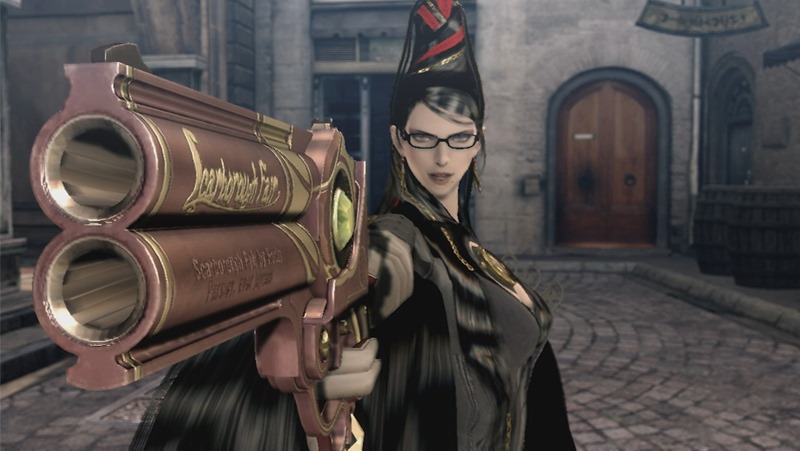 While the basic structure of Bayonetta doesn’t exactly stray away from the norm, the same can’t be said for the core gameplay. At its heart, Bayonetta is all about using a variety of techniques with which to scrap it out with various hosts of angels. The combat is extraordinary to say the least, fine-tuned and polished to an insane degree as Bayonetta uses multiple sets of guns and unlockable weapons in her pursuit of the past.  By affixing various weapons to her limbs, the combat also begins to offer players more options and gives players choices between attacking faster, stronger or even both should you unlock the necessary items needed to acquire such skills.

A dodge mechanic is also present, with perfect timing rewarding players with a matrix-like slow-motion effect that allows for the damage to be piled on. It’s an absolute necessity to master this technique, as even a good offense needs a decent defense. The core combat itself is especially deep, with dozens of combos available, yet the madcap action never feels out of control. With a bit of practice, you’ll be nailing combos that will make the eyes of onlookers explode, as Bayonetta sizzles into action with the explosive arsenal of tricks in her bag. 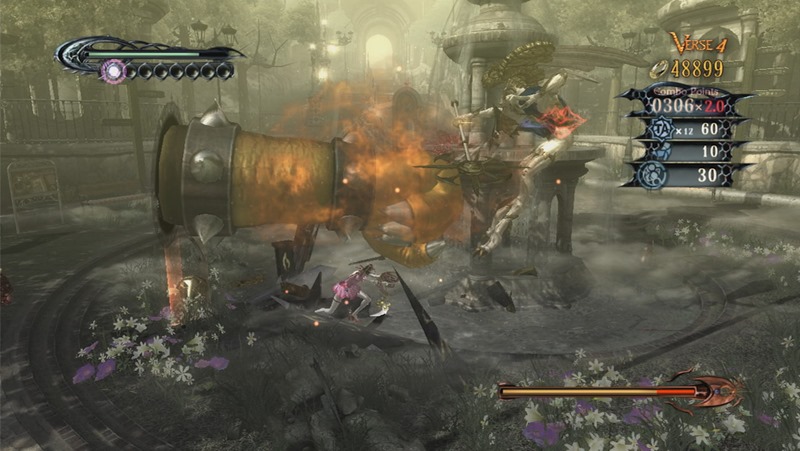 That action is punctuated by extra Torture Attacks once a bar is filled. It rewards players with extra currency with which to upgrade their attacks, and Wicked Weave spells that allow the impossibly leggy witch to summon monstrous beasts from the hellish Inferno domain and finish off her opponents. There’s also a great selection of angel fodder to plow through, with the game doing a fine job in offering up decent mixes of giants, holy snakes and weather-manipulating titans.

Bayonetta has a few quick-time sequences available, but thankfully, they’re nowhere near as oppressive or distracting as the events that plagued many a game from the era. With most of Paradiso gunning for you, Bayonetta quickly becomes a game of escalation. Enemies that popped up as bosses early on become regular obstacles that pepper a gauntlet of destruction by the time the end-game rolls around. 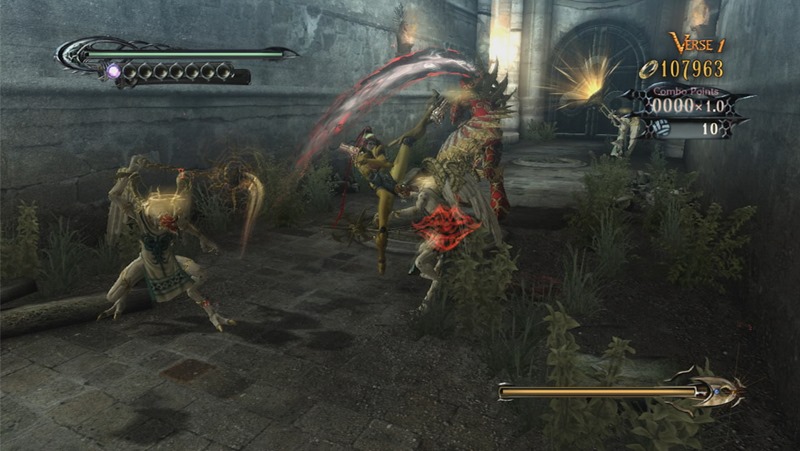 Sprinkled between those stages are a few clever homages to other games that help break up the flow of constant boot-to-ass blasphemy. Playing through Bayonetta will take you anywhere from between six to ten hours, depending on your current difficulty setting or tolerance for cut-scenes. Once the credits roll, there’s still plenty to do thanks to arena stages that are hidden within the game, as well as two more difficulty modes which up the punishment ante.  There are also more moves to buy as well as some extra weapons from your friendly neighbourhood demon blacksmith.

It’s been a couple of years since the game was released, and it’s beginning to show. Ignore the cheesy plastic doll visuals however, and you’ll find that Bayonetta is still a massively imaginative game, as the Umbran witch goes into battle with skyscraper-sized Angels and their various minions. The game makes no bones whatsoever about it being heavy on the cheesecake and page 3 visuals, but writing it off because of that is a disservice to say the least. More often than not, you’ll find yourself laughing at this gratuitous pandering, instead of succumbing to it. 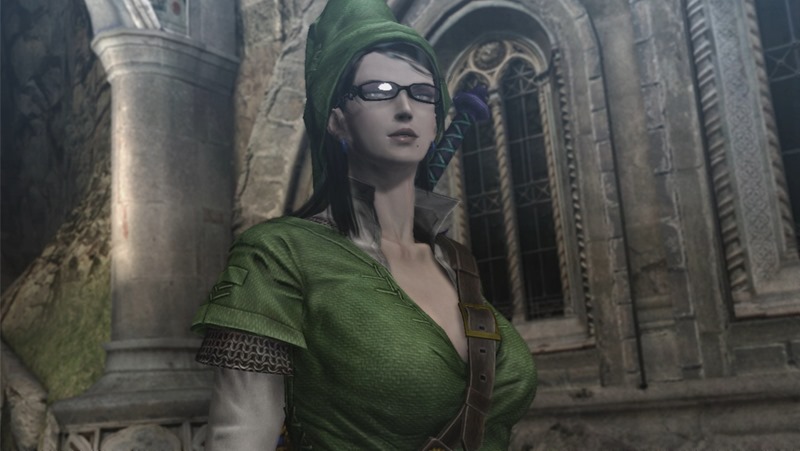 If anything, this is a game that will leave you breathless when it comes to some truly inspired design. If there is some nit-picking to be done, it’s with the soundtrack to the game, which mixes weird Japanese pop music with a soft Jazz score and the occasional bit of rock; a selection that doesn’t always gel well with the aesthetics of the game itself.

The biggest draw of this version of Bayonetta however, is that players can finally take the witch to bed with them. But not like that. The Wii U GamePad boasts a perfect transfer from your big screen to the smaller screen in your hand, with the action never slowing down for an instant. It’s a smooth transition, playing like a point ‘n tap game on steroids that makes for a great feature to boast about. If you’re not too keen on using the bulkier GamePad and want to avoid awkward questions as to why your bed has a massive increase in sexual innuendo as of late, there’s also support for the Wii U pro controller. 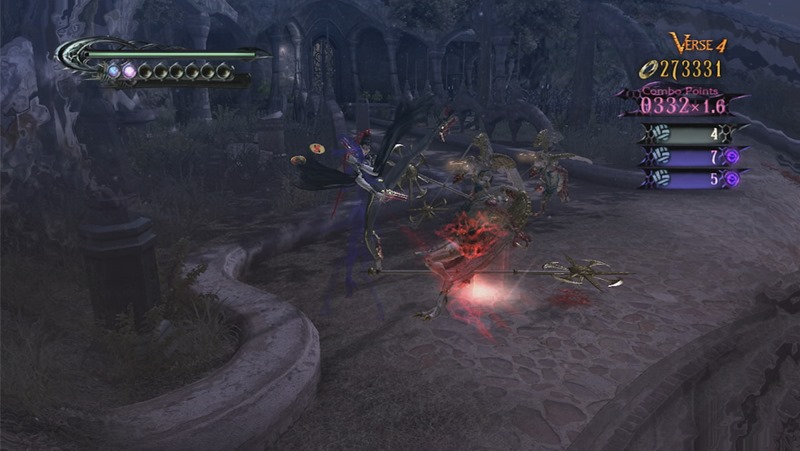 There’s also a more cosmetic change in the air, with Bayonetta able to dress up as Nintendo fan favourites such as Princess Peach, Daisy, Metroid’s Samus Aran and Link himself, with the costumes staying with players all the way, cut-scenes and all. And if you thought Bayonetta’s original outfit was provocative, then you’re about to have a confused childhood when you see her interact with characters dressed like Mario’s girlfriend. 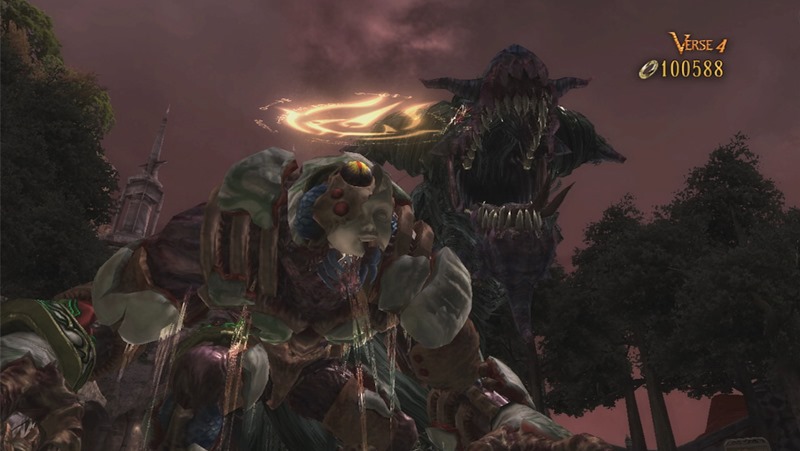