The life of the ordinary house cat, one could easily argue, is filled with nothing but pampered bliss. Think about it for a moment. Head and ear scratches are aplenty, food and water bowls are always filled to the brim, and doors are opened and closed repeatedly to let the feisty felines in and out, even if they request it at two in the morning, and again at three, and four, and five. Aren’t cats just the best?

Now, what happens when you uproot a proper loved and well-indulged tabby, drive a good stretch along a deserted road, and abandon them in the middle of nowhere? That essentially, is the premise for Cattails – an adventure survival simulator that closely follows the extraordinarily addictive formulas of other games in the same vein, like the excellent Stardew Valley. 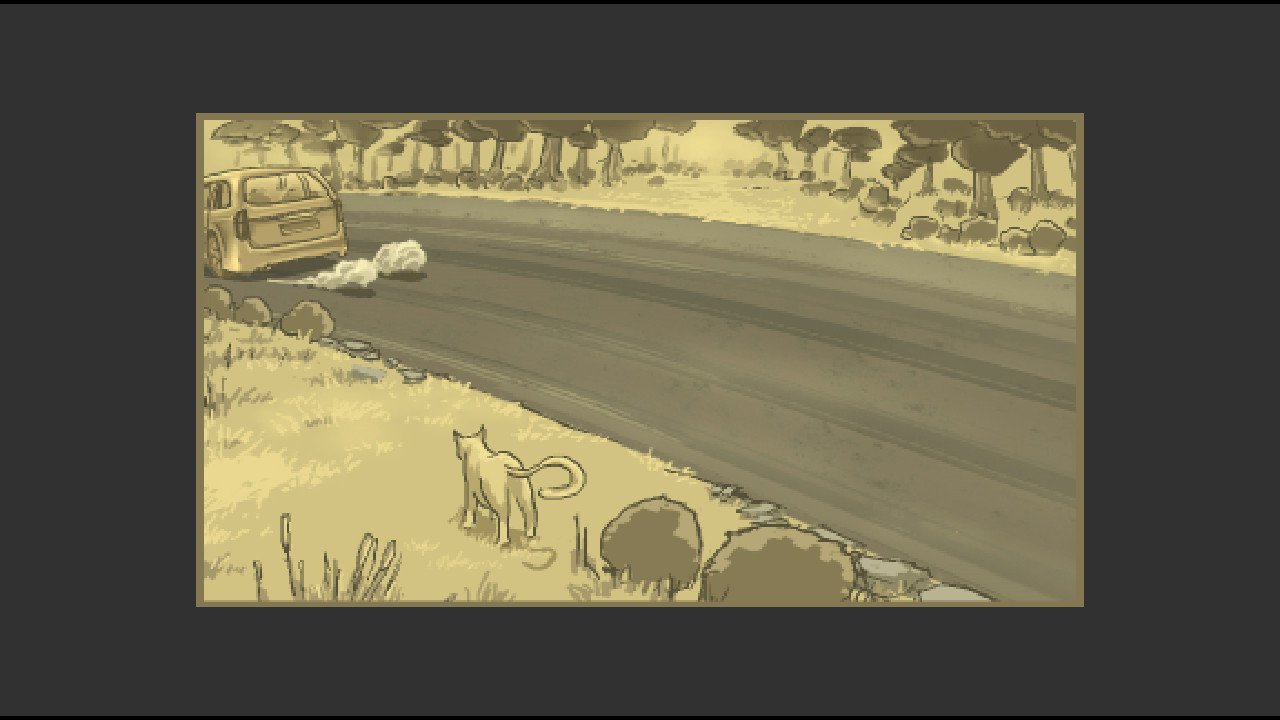 Cattail tweaks the formula in a few ways, however. Growing crops, for instance, is absent from the equation, as is crafting and other bits and bobs you would expect from a game of this nature. Everything else remains though, including a top-down perspective on a retro 16-bit aesthetic, a large map to explore, and a cycle that moves through the four seasons – all of which have their own distinct visual styles and music. Oh, and of course there are a variety of NPCs, mostly cats, in this case – to chat to, create friendships with, and, if you play your cards right with one of them, start a family with.

Before you can properly sink your teeth into Cattails, you’re taken through a quick tutorial where your customised feline is taught how to fend for itself. There are only two meters to worry about: health and hunger. The former can be restored simply by ingesting plants found in abundance throughout the game, and the latter, with just about everything you can imagine a cat eating. Toads, rabbits, squirrels, fish, mice, and more litter the world map, and they’re all yours to snack on – if your sneaking skills and patience are on point. 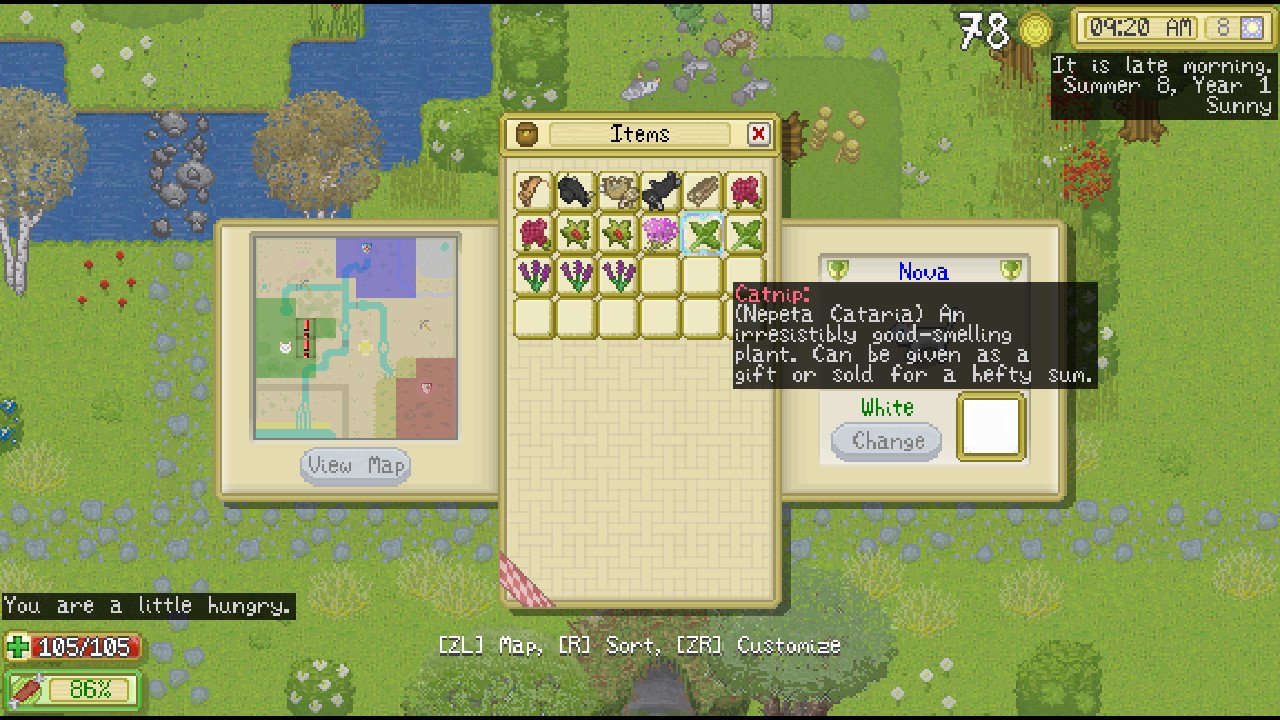 After learning how to survive the wild, you’re prompted to join one of Cattail’s three cat clans; the Forest Colony, Mystic Colony, or Mountain Colony. Your choice, from what I can tell, merely dictates where you start on the map, and thus, which rag-tag group of cats you’ll form bonds with first. Don’t worry, you’ll have the opportunity to visit other colonies to tango with its various inhabitants, but not just yet. You’re barred from entering their lands, at least until you can earn their trust.

In the meantime, you can expect scraps with the felines from opposing clans, because as it turns out, there’s a never-ending battle to control territory on the world map. Do your bit and win daily skirmishes, and you’ll not only score better reputation for your colony, you’ll walk away with a spot of money and experience too. 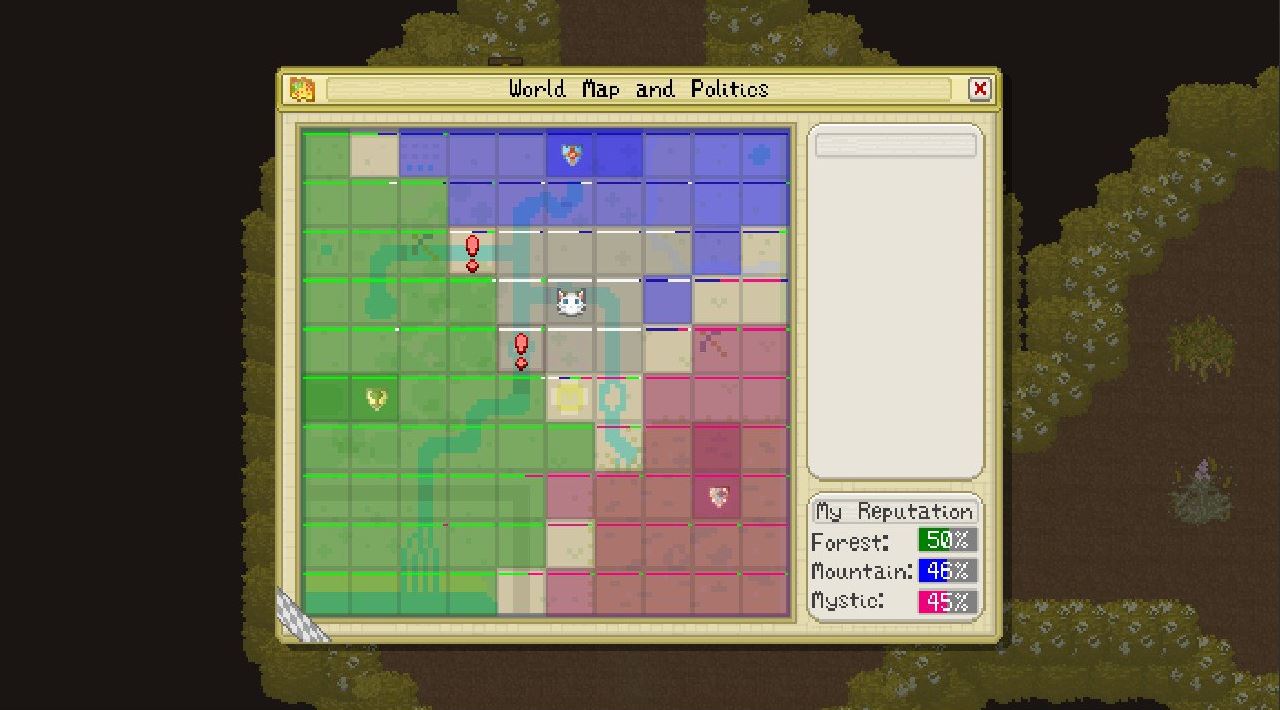 These territorial battles are all optional, though. Besides the monetary and XP compensation they provide, there’s no real incentive to take part, not that I could figure out anyway. Even if there was, I don’t think I would’ve bothered too much, because Cattail’s combat, sadly, is lacklustre. The only real strategy is to spam the attack button to deal damage, and sidestep to avoid taking any yourself. Sure, acquired experience points could be used to unlock special combat abilities, but they all seemed so uninspired on paper that I never felt compelled to unlock any of them.

Instead, I spent my XP on other, more important passive skills (and fast travel abilities – because those were just super handy). Hunting, fighting, swimming, and foraging can all be levelled up accordingly, and doing so simply makes you more proficient in each. Put enough points into hunting for example, and you’ll be better at finding prey and snagging it. 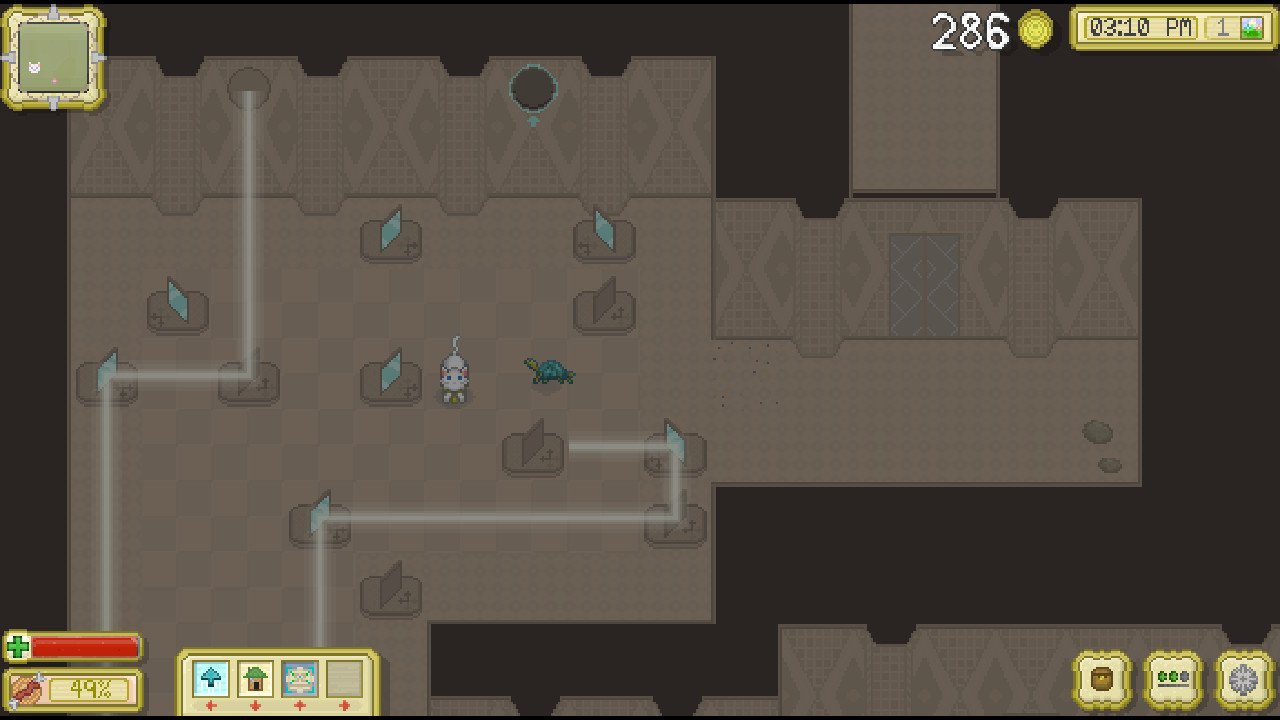 And you’ll need to successfully hunt a fair amount of critters to chase down the game’s only real objective. The same way Stardew Valley has its Community Center – a place where you hand in a variety of seemingly random items to unlock extra goodies – Cattails has a temple to pull you through its barebones story. You’ll find six pillars in this sacred place, all of which require various tributes to bring back a Forest Guardian who has mysteriously disappeared.

It’s this particular loop that makes games of this nature super addictive. With limited time in an in-game day (it only lasts a handful of minutes) and so much to bring back to the temple to restore balance to the forest, you’ll find yourself planning ahead and forming mental checklists. Honestly, there are few feelings that top the sweet satisfaction that comes with ticking tasks as complete. Or is that just me?

Today you could venture into one of the mines to see how far down you can get. Tomorrow, you might plan to do some hunting and offer whatever you find to your love interest (or maybe even an opposing colony to gain a fraction of their trust). The day after that? It’s the Summer Festival, where you’ll get to play a minigame and exchange the tickets you earn for handy prizes – some of which are actually required for the temple. 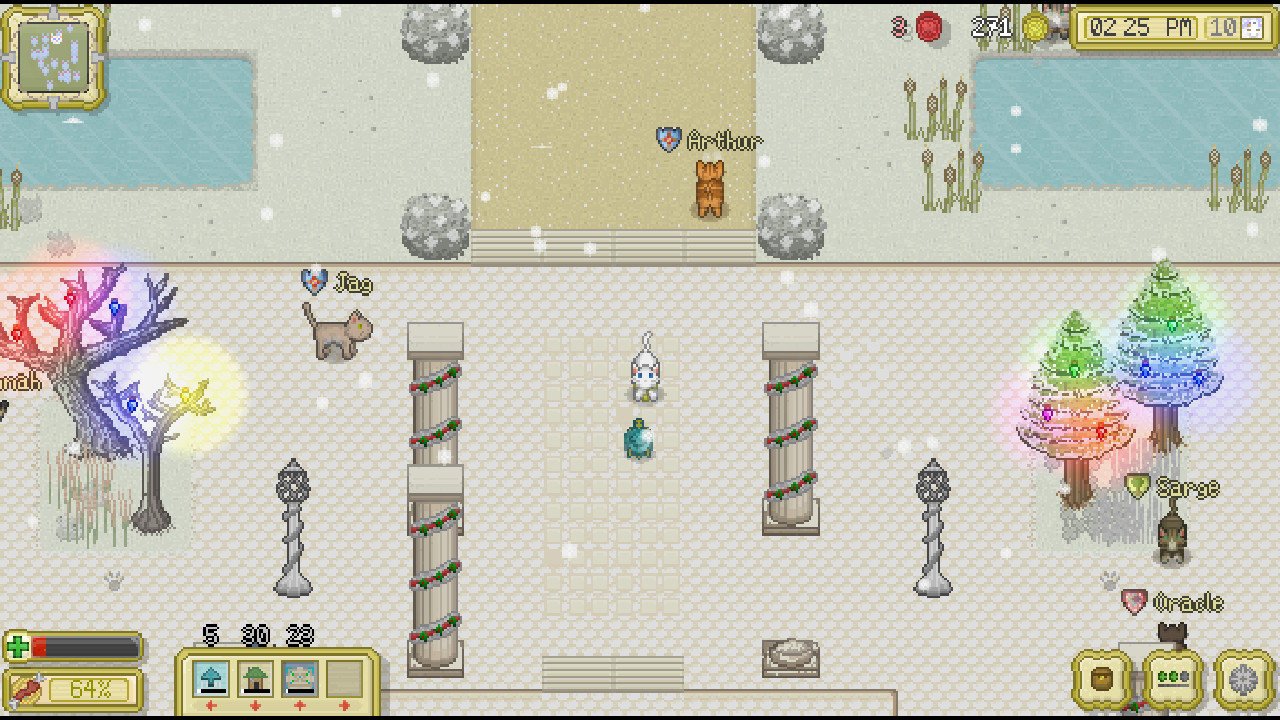 Cattails, unfortunately, does start to feel a little tedious after a few hours. Once exciting activities soon start to feel like chores. The combat continues to be dull, and dialogue becomes rather repetitive. For me, the days started to stretch into years, and still, still the in-game love of my life wouldn’t let me have her paw in marriage. Did our longstanding relationship and my sporadic offerings of small woodland creatures mean nothing? Perhaps I should’ve taken the time to go out and find more catnip. Every cat loves catnip!

Despite the fatigue I experienced, I did keep getting that punch of OCD satisfaction every time I managed to acquire something I needed for the temple, which pushed me just that much closer to finding out what happened when all tributes had been offered. Over and above that, in a side quest of my own making, Missy finally allowed me to tie the knot. In fact, we’re expecting kittens in the near future! 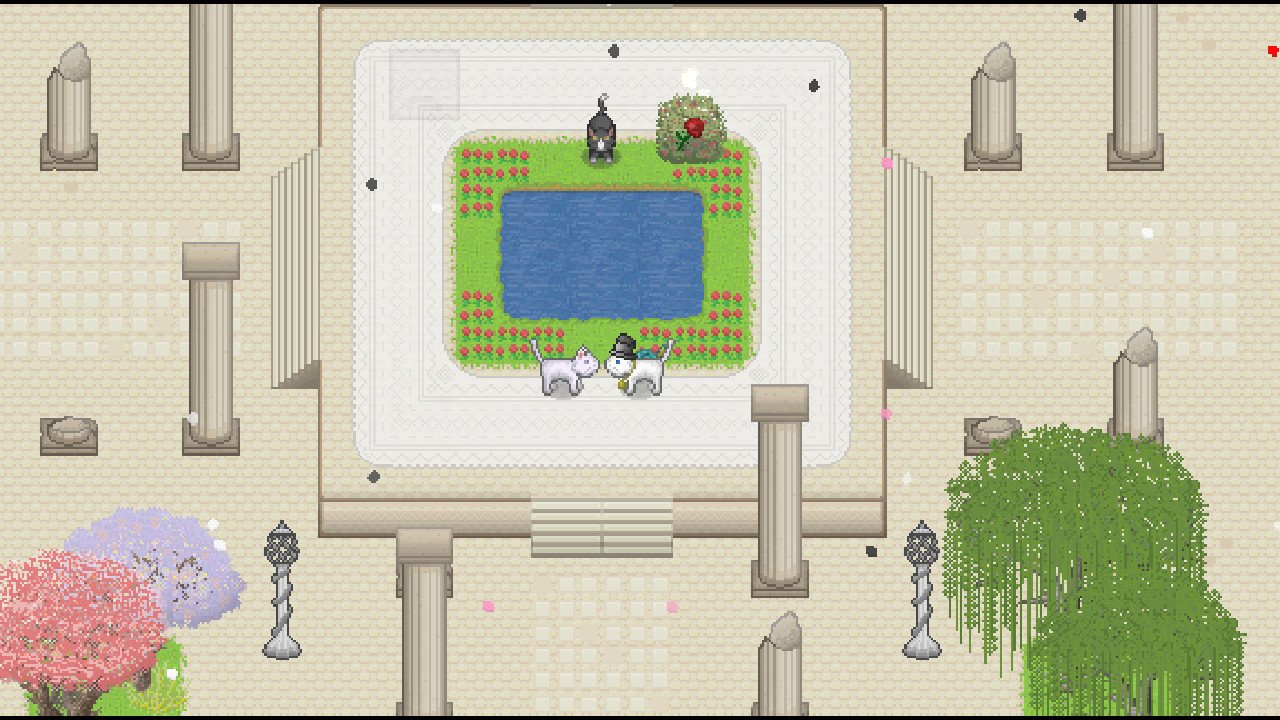 Yeah, this is me living my best feline life, and I ain’t even mad. Cattails may not be something that will set the world on fire, but the charm it oozes certainly can’t be ignored. The music in particular, well, let’s just say that I can’t stop humming various tracks from all four seasons.

This isn’t a game for everybody, however. Cat lovers? Sure, you’ll definitely get a kick. People who love the never-ending pursuit of foraging, exploring, and just being busy in a game world? Absolutely! If you don’t consider yourself part of both, or even just one of these camps, I’m afraid you’ll find little joy with Cattails. If you do though, you’re in for a great experience.