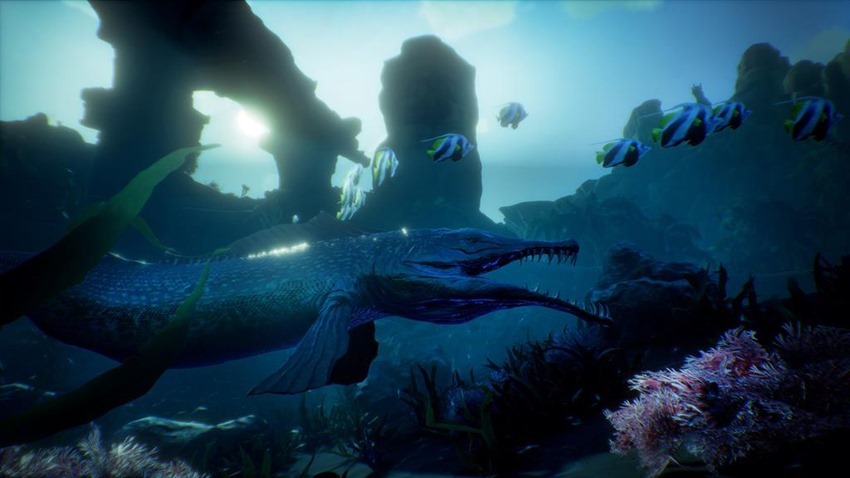 “Crom, I have never prayed to you before… but don’t let them rob me of my loot”, I wept as my character was abruptly and mercilessly butchered by an enemy player and his gang. It was my first taste at the unforgiving nature of Funcom’s latest open world survival game, Conan Exiles. Yet, I wouldn’t have expected (nor wanted) anything less from an open-world experience based on the classic tales of Robert E. Howard.

Survival and adaptation are key to success in the brutal world of Conan Exiles. It provides an enjoyable gaming experience; however, it fails to reach true Cimmerian glory. The title is not only marred by a sluggish and batty combat system, but it frequently struggles under a multitude of technical issues. However, it provides a deep and rich survival experience and one that fans of the build-and-survive genre will surely find immensely enjoyable. 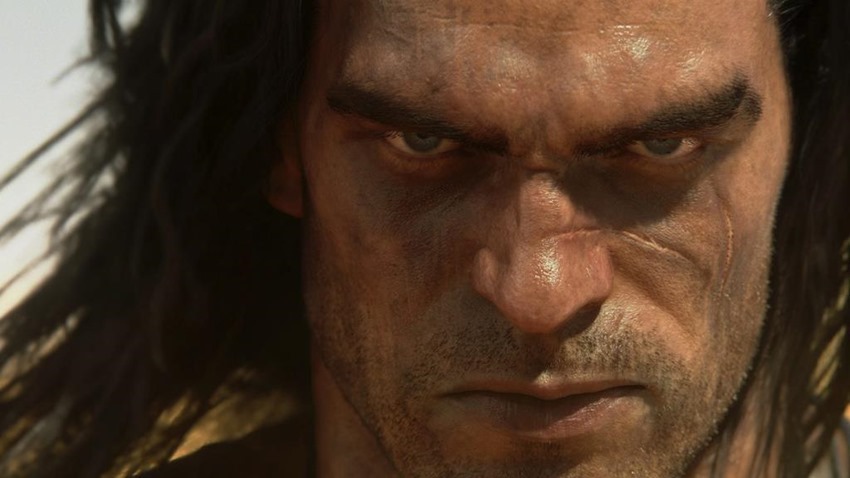 The game starts with your highly customisable hero exiled and crucified in a desert wasteland. It is here that some of the more controversial aspects of Conan become apparent. You’re allowed to set your character’s “genital endowment” through a slider. I found it refreshing that the game had such a liberal view on nudity, however, considering the presence of more pressing issues with character animation, I’m not sure the game benefits as much from such a copious display of kielbasa (nor the accompanying and frightfully realistic “genital physics”).

Your character finds himself (or herself) saved from an early grave through a chance encounter with the legendary Conan – who reluctantly gives your character a helping hand.  Almost immediately, the game throws you into a battle for survival; your character starts to grow hungry and tired. You quickly realise that you’ll need to find food, shelter and fresh water. You discover that you can craft clothes from plant fibre and simple tools from pebbles and branches, and eventually, you’ll scavenge enough materials to be able to build a small shelter.  There is no immediate or overarching narrative, nor is anything explained. You learn about the world through a healthy spirit for adventure and a lot of trial-and-error. Eventually, parts of the story are revealed to you through your interactions throughout the game –  but there are dangers a-plenty in this world, from hostile rival tribes, ferocious predators and menacing demons. 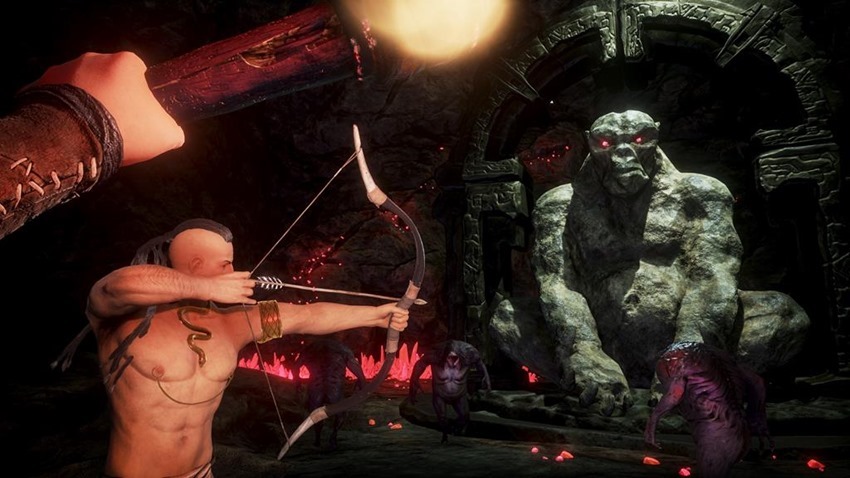 Conan Exiles is very similar in scope to many other games in the survival genre. Your character progresses with ease. Initially, you earn skill points for doing simple tasks, from learning how to roll, or doing a simple kick or even climbing a rock face.  Eventually, you gain experience points that allow you to unlock more points. The unlocked skill points can be used to unlock specific perks (either strength, endurance etc.).  However, you are in full control in how you adapt and configure your character. You can focus purely on survivability or become a powerful demi-god/behemoth that can plough down his or her enemies with ease. 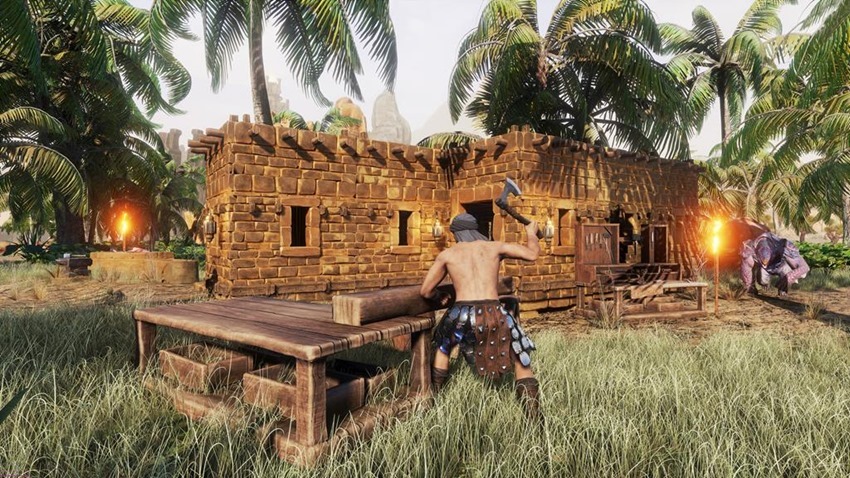 Therefore, it’s a real shame that Conan Exiles fails on the combat front. In Conan the Barbarian, one of the warlords asks our hero, “What is best in life?” and Conan replies “To crush your enemies, see them driven before you, and to hear the lamentation from their women”. I would have loved for the game to feature a combat system that was a lot more dynamic and powerful. You expect the violence to be frantic, brutal and, in your face, and yet, the combat system for this game feels unnecessarily laboured. It’s a sluggish affair that at times feels almost unresponsive. You can lock onto enemies but when faced with a gigantic monster or boss, it sadly runs contrary to sense, and you find yourself underneath your foe, while its body obscures the skirmish. 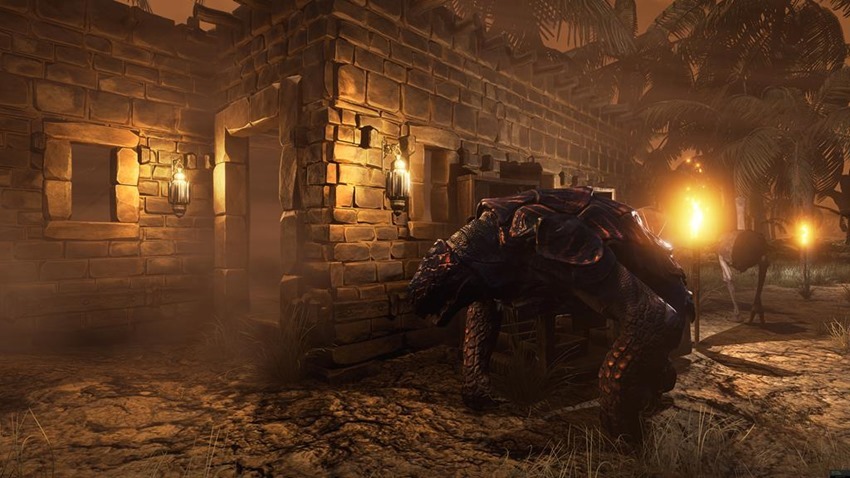 Death is an inevitable part of Conan Exiles. You may be killed in combat, or by another player or from merely slipping off a cliff and plummeting to your death or even finding yourself trapped in the wastelands during a sandstorm.  Depending on your difficulty settings, you may have to trek back to your corpse to reclaim your gear.  If you are playing on a PVP server, your gear can be taken by whoever killed you.  While the combat system leaves much to be desired, I thoroughly enjoyed the dungeons and the act of dungeon crawling.  You must fulfil a set of requirements to open a dungeon. These depend on the dungeon, and they can range from luring and killing an enemy in front of the gates or spilling the blood of demons near an entrance.  It is possible to complete some of the dungeons on your own (and they are legitimately challenging), I would recommend attempting this part of the game with friends. 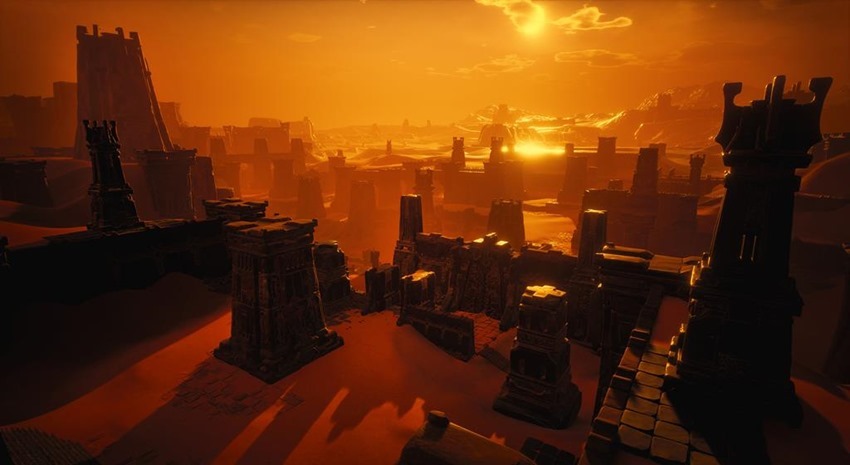 As I’ve mentioned, it is possible to play the game on your own, but Conan Exiles allows you to play with up to 40 players per server.  While I wasn’t a fan of the PVP servers, I found new friends, banner-men and comrades on the PVE side of the game. I will gladly admit that there’s nothing more satisfying then defending your buildings against an enemy attack, discovering they’re trying to unleash siege weapons, and fending off their ill-fated loot run.

As with most survival type games, hunting and gathering are a core part of the game. You will spend hours upon hours gathering materials and goods to improve your chances of survival. It also helps that the crafting system is incredibly complex and deep. You can craft armour, weapons, tools, building components, and even furniture. If you’ve managed to enslave a few thralls, some of them even carry special recipes or blueprints. I thoroughly enjoyed the crafting aspect of the game.