Dark Souls over the years has replaced Ninja Gaiden as the go to descriptor for challenging games. I guess it goes without saying that it’s undoubtedly hard, notoriously so, to the point that its difficulty became a selling point for the game’s marketing. It’s one of the reasons why I love this game so much. I can’t deny that I’ve had a penchant for hard games ever since I got into this hobby, and I wear my Ghosts n’ Goblins and Ninja Gaiden Black battle scars with pride, but when it comes to Dark Souls, it’s what lies beneath the surface that cemented it as one of my favourite games of all time. In fact, it reminds me of another favourite of mine, Castlevania: Symphony of the Night. 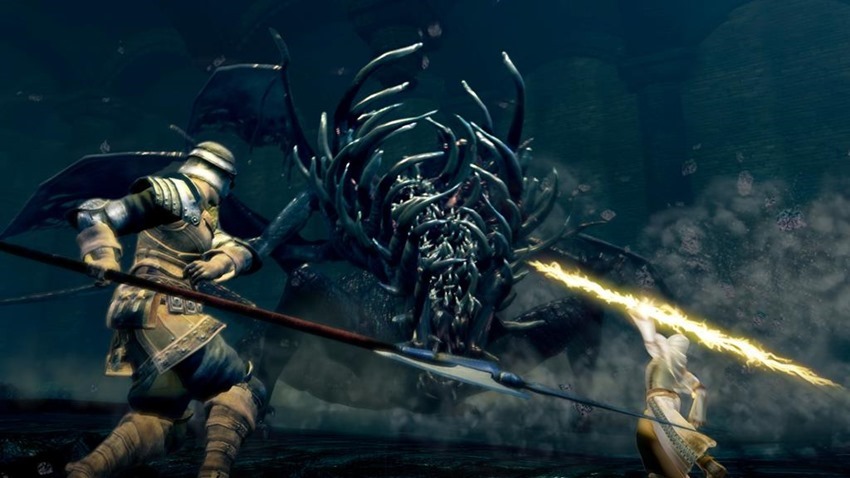 I remember how enamoured I was with Symphony of the Night (or SOTN) as a kid. The gameplay was fun sure, but the wondrous sense of exploration and discovery is what sucked me in and made me feel like I was in another world. Dracula’s castle branches out into all sorts of areas you wouldn’t expect, from a tranquil cavern to an ominous cathedral, SOTN manages to take you on a wild adventure from start to finish. I loved the level design in this game, and it’s the reason why it still holds up to this day. What absolutely blew me away however was that the entire ‘second half’ of the game was hidden away and easily missable. SOTN has a lot of secrets and you’re going to have to put in the work to see all there is, and it’s this reliance on your sense of adventure that I adore about Dark Souls as well, that constant push to keep playing so that you can experience the next exciting discovery. 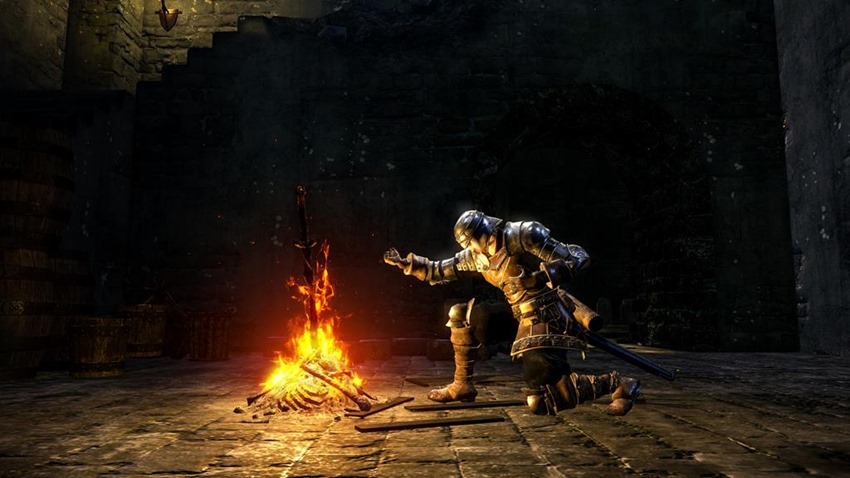 The game’s invitation for exploring wouldn’t be as enticing without an interesting and well-designed world but not only is Lordran, the world of Dark Souls steeped in rich and interesting lore but the level design is among the best in the industry. The way areas loop around and connect with each other is incredible and most importantly, sensible. It’s something the sequel was lacking, with often disjointed areas that feel like they were slapped together without any thought (I still wonder who came up with the idea of taking an elevator up from a mine into volcano). I think the moment I realized the greatness of this game was when I braved the poisonous swamp of Blighttown, found a giant hollow tree that you could traverse which lead to the completely optional but hauntingly beautiful Ash Lake. When a game rewards the curious player with entire new areas like this, you know you’re playing something special. 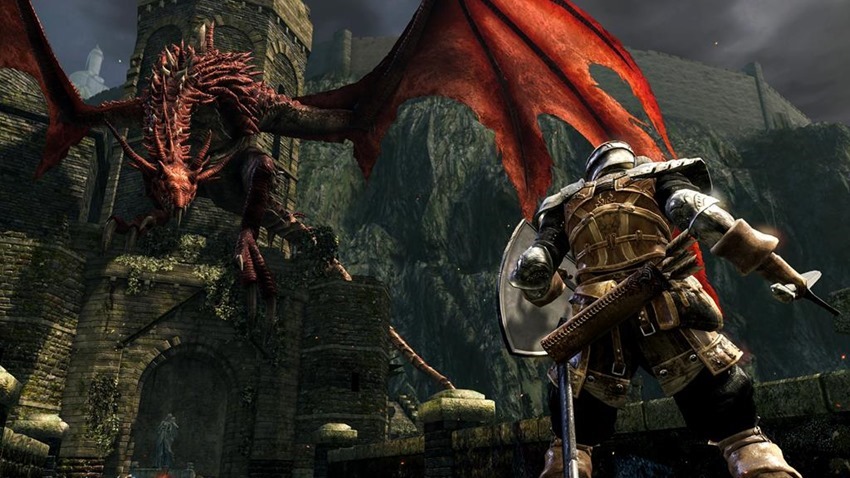 So Dark Souls has an amazing world that’s just begging to be explored, but it also has some of the best gameplay in the genre. Combat is deceptively deep, with a major focus on slow and methodical play. Running head first into battle is never the best idea and instead you have to analyse your opponent’s movements and wait for the perfect time to strike. Expect to die a lot, but death is empowerment, and it’s how you grow in the game.

You also have a lot of freedom in how you build your character. You gain souls from defeated enemies, which you can then use to level up individual stats, and this dictates what kind of equipment you can use as well as how damage scales based on those stats. The types of builds you can come up with is incredibly fun and it’s a huge reason why most people continue to jump back into that game long after they’ve completed it, just so they can try out a different way of playing. Multiplayer remains a large part of the game as well where players can leave notes for each other in the game world or engage in jolly co-operation and even invade other player’s games for some PvP action. 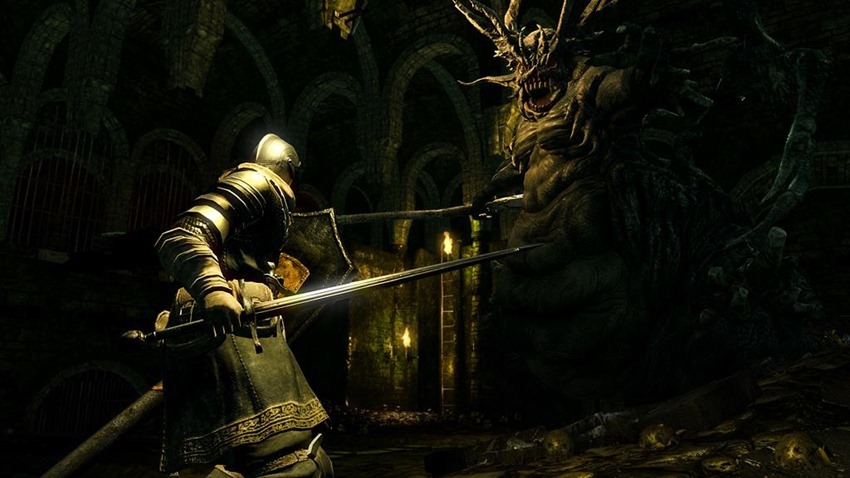 As a game, Dark Souls is astronomically good, but as a remaster however, it’s woefully underwhelming. Not much has been done to the game itself. It looks slightly better with improved effects and lighting but it’s hardly noticeable. The effort put into the visuals are so inconsistent as well, as now there are better looking fog gates, but a lot of other textures and things like water effects were seemingly untouched. At the very least, performance is rock solid. Blighttown is finally running at a smooth frame rate, which is quite the achievement on consoles, but in all honesty, that’s not a very high bar and better performance is something to be expected of a remaster of a seven-year-old game. Motion blur has been added that you can’t turn off on consoles and it’s one of the worst changes made to the game for me personally as it gives me literal headaches and it took quite some time to get accustomed to it. What’s really baffling however are the gameplay changes or lack thereof. 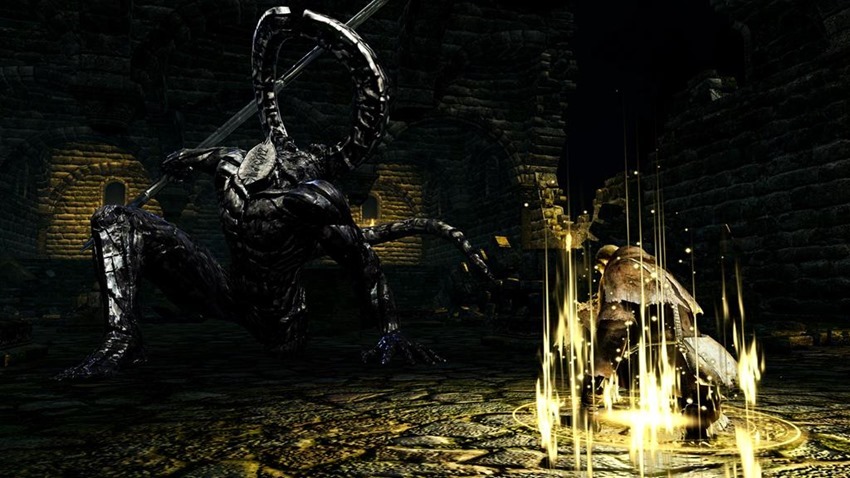 There are a lot of minor additions to the game, such as having the ability to switch covenants at a bonfire as well as the implementation of password matchmaking and an increased online player count. These are great QoL changes, but if effort was put into making these changes, why not go the extra mile. You can now use multiple of the same kind of items from the menu in a single use, but it closes the window each time after doing this so it’s still quite the annoyance. UI can now be scaled but menus are still a pain to navigate even though later games made several leaps forward to remedy this. There are so many other changes they could’ve done to enhance the experience without affecting the core gameplay, but even in saying that, maybe a bit of a shakeup would’ve helped in revitalizing this game for returning players. When Dark Souls 2 made its way over to current gen consoles in the form of Scholar of the First Sin, they remixed enemy placement and even went as far as adding in all new content, but in this remaster, everything is still exactly the same, and as much as I love the game as it is there was a ton of room to improve the core experience and as someone who poured hundreds of hours into both the console and PC version and all the Souls game that followed, there’s is really nothing here to make me want to go back. 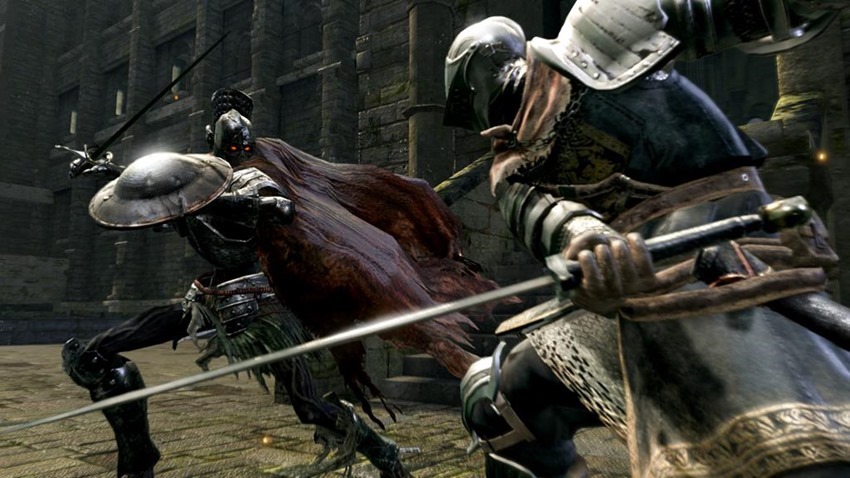 Dark Souls to me, is a perfect game, or at least as close to one as can get. It’s got its share of flaws sure, but it also excels far beyond what I expect out of a game in almost all areas. The remaster however is about as standard as they come. It’s the best way to play this game on consoles right now, especially if you’re a newcomer but if you’re like me and have played it to death before, there really is no reason to jump back in unless you’ve got that uncontrollable Souls itch that does honestly creep up every now and then.