Death. What a bastard. For many of us, we’re all just one bad forum post away from that fatal embolism that claims us, but for the blob of cellular matter that inhabits the corpses of prisoners and embarks on yet another quest to escape a land that has been ravaged by some mystery malaise menace? It’s just another Tuesday for a living impaired warrior. 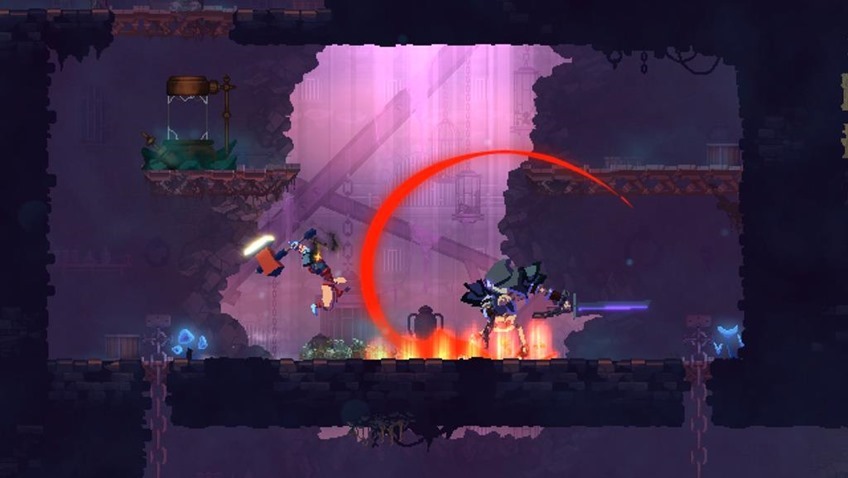 I’ve been knocked off of ramparts, torn apart by the explosive excrement of a hyper-aggressive worm and had my organs rearranged by a hulking monstrosity of armour that has claymores for fingers. And yet, Dead Cells has kept me coming back again and again since it hit Steam’s Early Access last year, fine-tuning itself and tweaking the most minute aspects of its design so that it can allow players to revel in its action-packed odyssey. 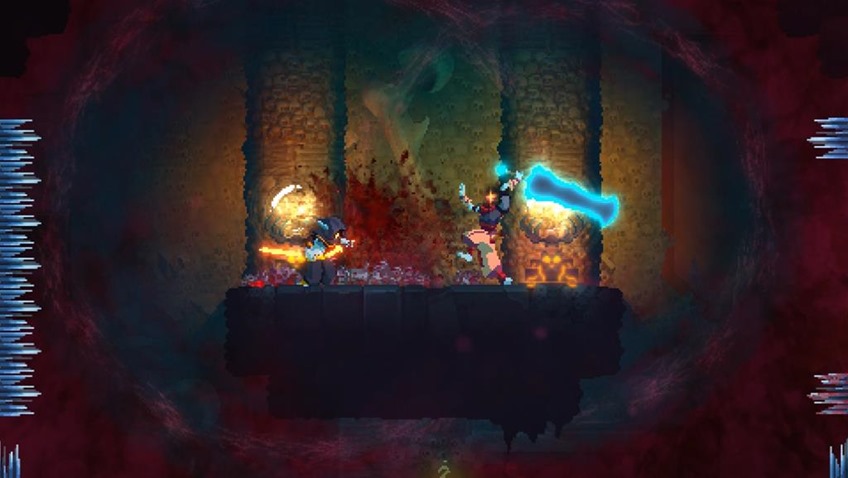 There’s more than a year’s worth of this attention to detail that was inspired by feedback from fans and industry experts alike in Dead Cells, resulting not only in some self-reflection that has made the game a heavyweight in a month of Metroidvania, but a benchmark for its genre as well. The funny thing is, is that the Metroidvania label doesn’t do Dead Cells any justice.

Sure, the influences are there, as well as a touch of the ol’ Dark Souls for good measure, but Dead Cells is very much its own beast. The trappings of a familiar locale that houses secrets and enemies aplenty is a mere dash of the paintbrush on the canvas of Dead Cells, with the roguelike elements also being briefly light in how stages gently rearrange their key zones after the reaper claims your soul. 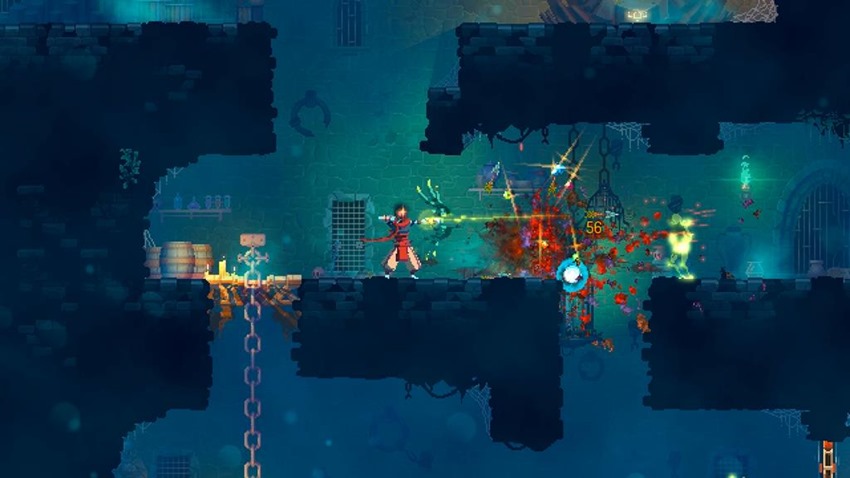 What Dead Cells is truly about, is action. And by Odin’s beard, is it good. The Prisoner that you pilot is a dab hand at plunging a blade into the flesh of the tortured souls who roam the castle that he happens to be locked up in, but even his skills aren’t enough to survive the constant onslaught of foes that Dead Cells throws at you. Not at first, that is.

Trial and error take on a new meaning in Dead Cells, as death becomes a rewarding experience that teaches players the ropes when it comes to the hazards of Dead Cells. One perfect run in the dungeon may be cut short by an encounter with an elite enemy, further foes force players to readjust their strategy and sometimes a tangle with one of the quartet of end-level bosses is won by the skin of your teeth. 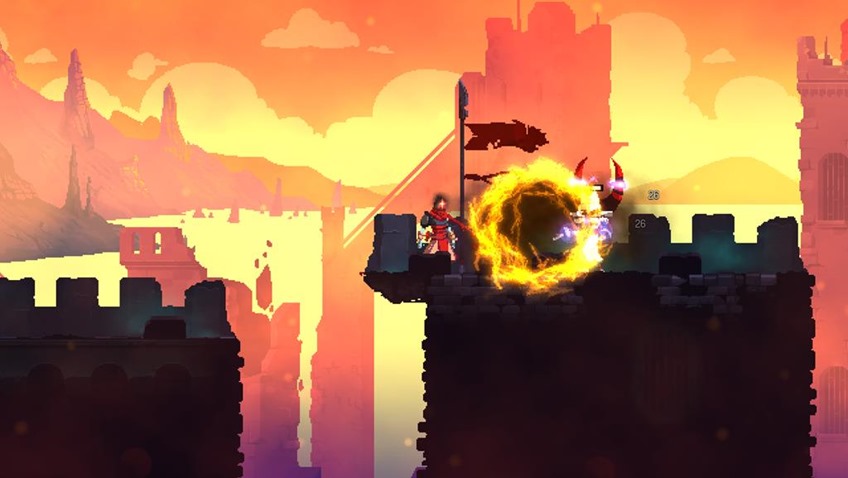 There’s a reason to keep pushing forward, of course. Taking down enemies earns a player cells, strange blobs of matter which can be used to unlock a few permanent upgrades and weapons along the way. Wish you had more health? Invest in more health flasks for when you need a top-up. Is that rusty sword not doing you any favours? Invest in a random roll of the dice that’ll unlock some new melee weapons for you when you restart. Wish that you could bank your cash as an insurance policy in case you bite the big one? Invest invest invest.

To get those brackets to invest in between levels however, you’re going to need a few blueprints. Found within the remains of certain enemies, the dozens and dozens of blueprints within Dead Cells unlock the bulk of the in-game arsenal and abilities available to players. From lightning-quick rapiers which are quick with the riposte to handy-dandy traps that can be set, it’s the hunt for blueprints that have the potential to finally deliver players that one key victory from a single run. 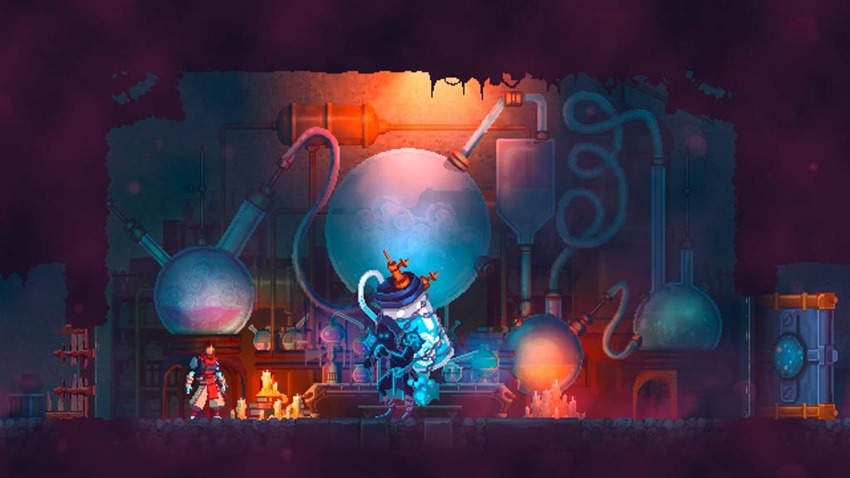 Here’s the catch though: Die, and everything is lost.

If you fall before you can reach your safe room between stages, that’s it. All cells are sent down the drain, blueprints are lost and you’re back to square one. It’s something that you’re going to have to get used to, as the motley crew of monsters in Dead Cells don’t hold anything back. Some of their attacks may be more telegraphed than correspondence in the 1900s, but combined they make for a fearsome force of antagonists who want you dead.

Plunging your blade deep into their grisly torsos though? That’s where the real magic of Dead Cells lies. The entire flow and structure of Dead Cells feels designed to keep you moving. To keep you on the warpath, carving your way through obstacles and never stopping as you cycle through your three primary trees of skill to stay a step ahead: Brutality, Tactics and Survival. 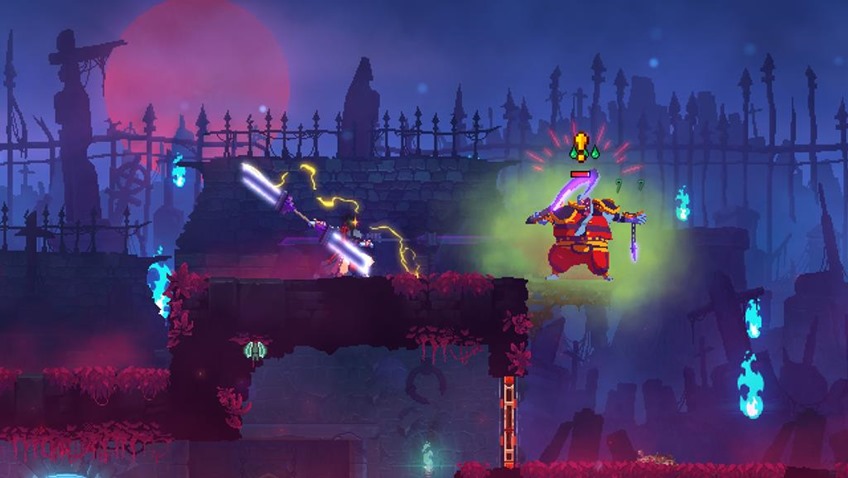 It’s easy enough to understand: Brutality ups your melee damage, Tactics makes your various gadgets that much more effective and Survival extends your life warranty in the face of overwhelming odds. How you use the trio to your advantage and the various weapons, is up to you. Prefer to let your gadgets do the talking for you as you drop them on enemies and watch them rip through the opposition? That’s an option. How about getting up close and personal and pinning a tormented knight to the wall with a spear? Hey, go for it.

Within that vicious cycle of death and rebirth however, lies a system that encourages players to make the most of their tools at hand. Random rerolls between stages can augment weapons to be even more effective, allowing players to really dial in the damage. Why poke someone with a pointed stick repeatedly, when you can cut them down to size with buffs that deal double damage if you happen to have the right gadget for the job? 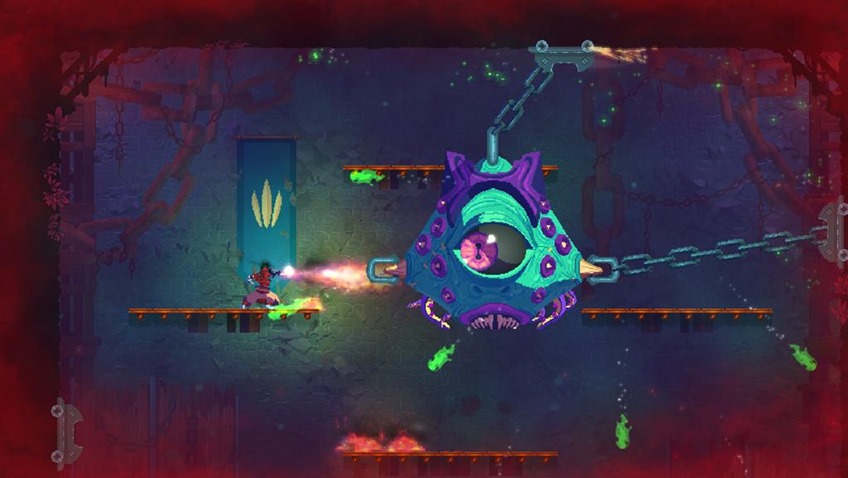 It’s ideas like this, that makes Dead Cells just that much riveting to play. The flow of combat is so on point, so beautifully fine-tuned that I’m one Eminem rap away from mentioning my sweaty palms and mom’s spaghetti. Dead Cells is the kind of game where you tell yourself that you’re going to have a quick ten-minute session and then wonder four hours later why it’s dark outside.

Punishing perhaps, but also never unfairly so thanks to the sublime design that emphasises speed, fun and precision as you build up the necessary muscle memory in your thumbs to try again. Dozens of hours later, and I’m still addicted as I send enemies into oblivion with a stomp attack, work my way through challenge rooms and try new strategies on the deadly bosses of each zone.