Developed by Evolution Studios (the folks behind the popular Motorstorm series) DriveClub promises to grace the PlayStation 4 with gorgeous visuals and intense racing action, glued together with a connected online club system. The big question is whether or not it delivers on its promises and provides the PlayStation 4 with a solid new exclusive racing franchise for fans of the more casual, less real-driving-simulator side of racing.

While you are given the option to play and create single events as well as join multiplayer games, the majority of your single player time spent in DriveClub will be spent in Tour, which serves as the game’s career mode. In Tour mode you must complete objectives in different racing events in order to progress and level up, which in turn unlocks more cars and bigger sets of events to move onto. 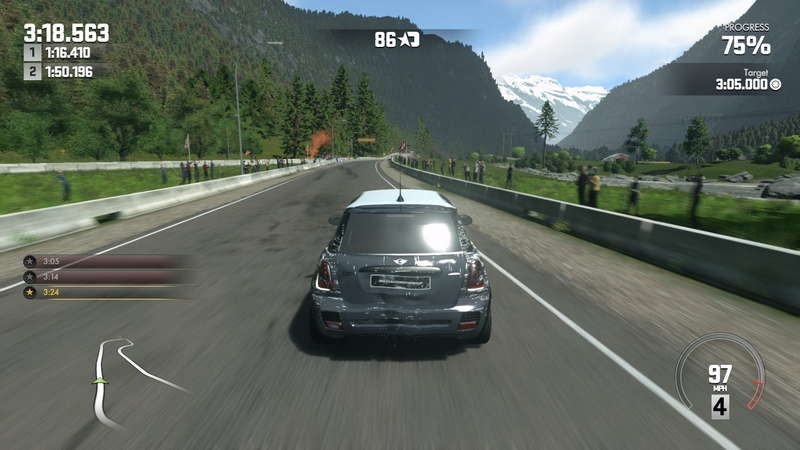 Events consist of races, time trials and drift challenges that each hold certain objectives that need to be completed. In most races you will not be required to win, but rather place in the top 3 as well as complete at least one additional objective such as beating a lap time or hitting a required top speed at some point in the race. Racing can either take place on circuits that have a set number of laps, or point to point races that sees you and your rivals tearing down the countryside to get from the start on one end to the finish on the other.

Time trials give you the road to yourself and require you to beat the specified lap times or make it from a start point to an end point on a longer road in under a certain time, while Drift offers up a challenge that has you needing to get sideways in certain areas to accumulate drift points, but then also keep up high speeds as you make your way to the next drift area in order to earn even more points towards your total. 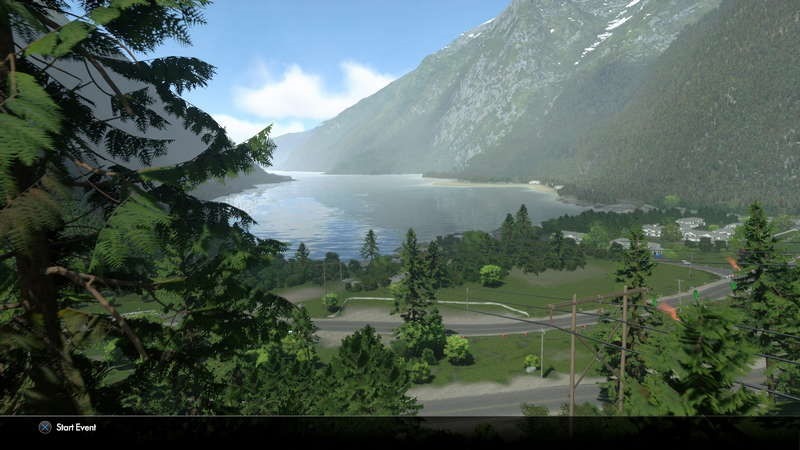 In total, DriveClub offers up a total of 50 cars that range all the way from Mercedes-Benz A45 AMGs and Audi R8s all the way up to your ultra-rare and insanely fast Paganis, Ferraris, Aston Martins and more. If you’re looking to get stuck into tuning setups or buying and installing new parts, look elsewhere, as what you see is what you get. Cars do show signs of great looking visual damage during races though, but mechanical damage is nowhere to be found.

You will find yourself travelling to 5 very different locations ranging from snowy mountains to the Indian countryside, each containing multiple layouts for track, point to point races and so on that come to a total of 55 (11 per location). In many ways, it feels as if you are driving on various courses that have been plotted within a large open-world game, except that there’s no free-foam, but rather just the ability to jump to the courses in it for the various events. Locations have day and night and can lead to some very pretty moments and while it isn’t available at launch, gamers have been promised that a full weather system is going to be patched in soon after. 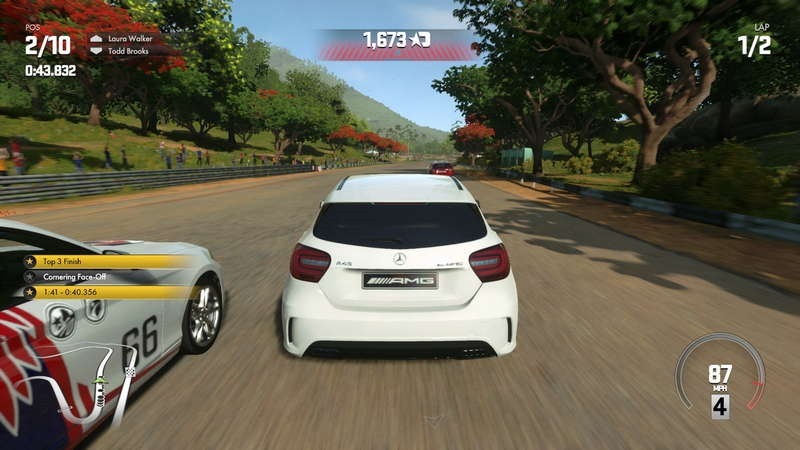 Driveclub is a connected experience that is designed… possibly to a fault, to be full enjoyed in a connected, online environment. While the game is still split into single and multiplayer modes in a way that you are used to, one of the main concepts of the game as the title may suggest, is the ability to join and be a part of a drive club. Together with the club system is a featured challenge system that may not feel too dissimilar to Need for Speed’s Autolog, offering asynchronous multiplayer that allows you to challenge your friends as well as other clubs, but more on that later.

If there’s one thing that the folks at Evolution Studios have absolutely nailed, its the way that a casual-sim/arcade racer should handle, and in a game that’s all about driving cars, that’s sort of exactly what you want to hear. No matter if you are playing a sim or an arcade racer, a game based on cars should have vehicles that work and behave like… well, cars. Not boats, not spaceships… cars. 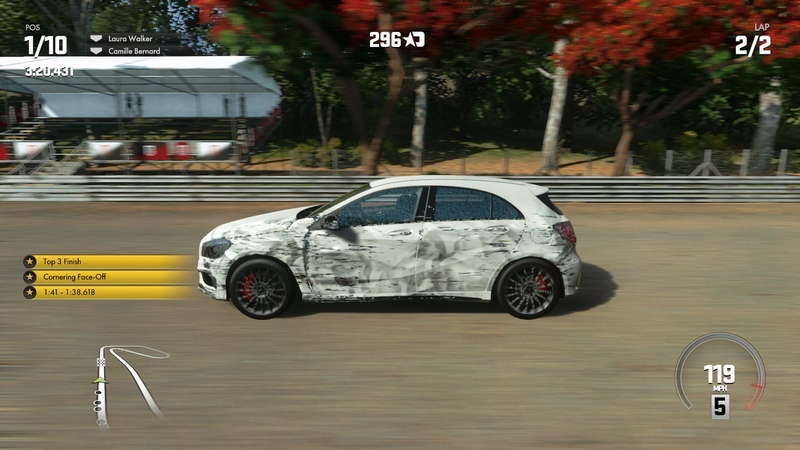 Driveclub finds a perfect sweet spot that allows a petrol-head fan of racing and sims like me to feel comfortable in the knowledge that the cars are behaving mostly like they should, with rear-wheel drive cars feeling one way, all/front-wheel drive feeling another and each car feeling unique in its own special way. Other very popular arcade-style racers out there would do well to pay attention to what they have done and try and mimic it. Yes, even that one and yes that other one as well. We also really liked a concept implemented into DriveClub that utilises green, yellow and red teardrop-banner flags that line corners, indicating how tight the corners are, allowing you to focus more on the track ahead of you and take each corner as it comes, rather than constantly finding your eyes darting down to the map to see what’s coming next or be babied by a suggested-line assist.

A shame then, that despite the driving feeling so good, the A.I can’t be held to the same high standards. Without needing to explain too much, just know that at all times you are most probably surrounded by a group of absolute lunatics who are incredibly happy to introduce you to walls or ram you from behind and spin you off. One moment they are flying past you at speeds that don’t seem to make sense, and the next they are slamming brakes in front of you in the middle of a corner that can easily be taken at full throttle. What’s worse, the only thing more insulting than being rammed off the road into a huge crash midway through a race, is that you’ll quickly find that the entire pack of cars has slowed right down up ahead to allow you to catch up (so that they can do it to you again). In all honesty, they aren’t always completely terrible, but expect to attempt to pull your own hair out on occasion. 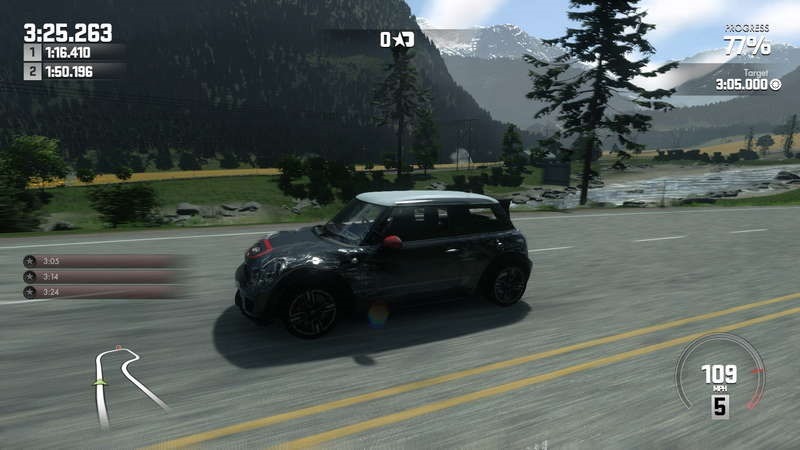 From a technical perspective, DriveClub definitely has a few “wow” moments that will have you staring at your screen wondering when games started looking this good. Cars flying through the desert at twilight look absolutely incredible as their lights bounce off of each other and the glow of their tail lights warm the part of your brain that likes pretty looking things. It’s not consistently as beautiful as its best moments, but overall its still the sort of game you wanna show off to your friends.

What Driveclub wants the most though, is for you to play together with friends one way or another. Join a club with friends, create a custom design for your cars, make your own club logo or challenge other clubs to beat your time/score. Set the time limit on the event and sit back, relax and watch them crush that time that you were so sure would be unbeatable for days, weeks even. Thanks to leaderboards and ghosts, you may find yourself constantly going back to redo events you have just beaten just to ensure that you beat your buddies best time, especially in time trails where the game dynamically serves up the ghosts of a friend who has a better time than you. 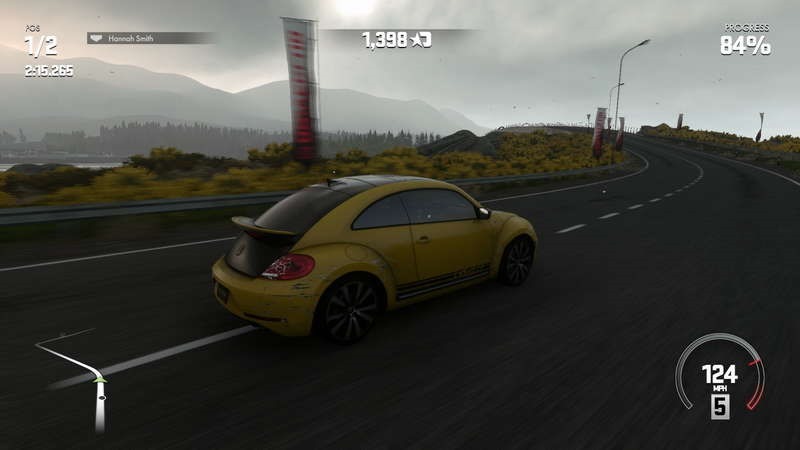 What we found even more enjoyable was a neat addition to the game in the form of mini-challenges that take place during the races. These come in the form of colour coded chequered flag icons stretched across the road, letting you know that the next small area contains a challenge. The challenges consist of different objectives such as sticking to a perfect racing line as much as possible, keeping a high average speed or even drifting through a corner. What is great though is that they serve up the best scores from your friends or someone from the leaderboards and put you up against them.

What’s also nice is that they aren’t always the same challenges in the same place every time you restart the event. This little addition injects a really fun and easy way to keep races even more interesting no matter the scenario and also helps keep the focus of the game on arcade-like competition and fun, so much so that you almost wonder what sort of fun would have been lost if they hadn’t included all of these great social connected features at all. 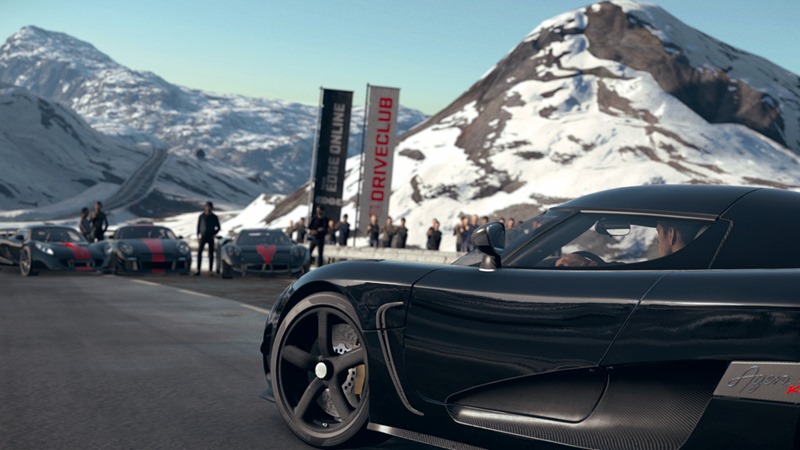 Unfortunately, you don’t have to wonder… all you have to do is experience what happens when you play Driveclub when not connected to the internet… and this is where we started seeing a shady side of the game that we wished we had never seen. When Driveclub loses connection to its servers, be it because of their own issues or yours, you suddenly find yourself sitting with a game that feels more like an empty shell of the game you were playing not very long ago. Connectivity changes the game so much that it almost feels like you are being punished for playing without being connected.

Those awesome dynamic mini challenges that happen during races? Gone. What about cars that you unlock because your club is at a certain level? Locked. When not online, we were unable to view our club at all, as far as the game was concerned we weren’t even a part of one. Our club level was gone and as mentioned above, cars that were previously accessible to us were now locked, stating the we required club level X or Y to use that vehicle. 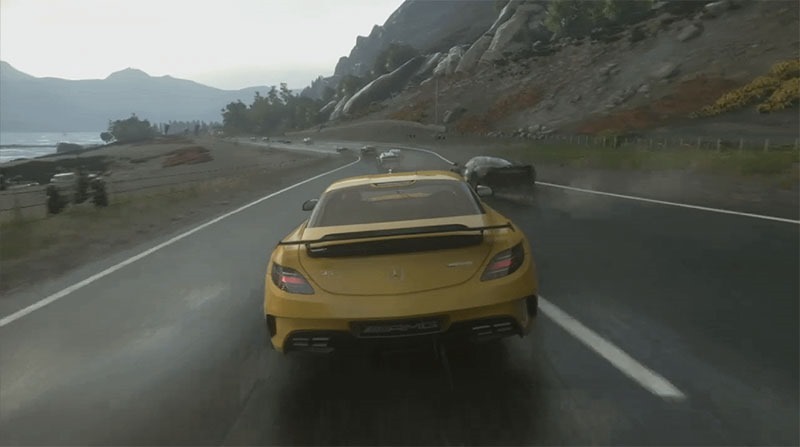 It was at this point that we realised just how crucial a lot of the little online features were to Driveclub’s overall experience. Take them away and the game suddenly felt… dead. No ghosts of my friends to keep me coming back, no leaderboards time to go back and beat, no mini event mid-race to try and beat that other guy’s average speed. We didn’t know if we should be impressed or disappointed.

With the servers being down on launch day, the game that people are playing is just a shadow, an empty shell of the game it should be.