Home Gaming Frostpunk review – Do you want to build a snowman?

In Frostpunk, winter isn’t the chilly season where you get to snuggle up to a toasty fire with a delightful hot drink and a book to read. It’s a trial of survival. One where laws need to be passed to make sure every citizen is doing their due, working under the watchful gaze of a leader they hope will save them from the brink of death. Frostpunk is grim, hopeless and gruelling, but it’s a captivating and clever city simulator that is rife with difficult decisions and gut-wrenching guilt over your failures.

Frostpunk’s main antagonist is the cold. Fleeing from cities following a winter of biblical proportions, settlements of scattered survivors cling to massive heat generators in the hopes of restoring a semblance of civilisation and finding a balance to help them survive. You’ll guide them down this path from the very beginning, with the roots or a bustling city starting from nothing more than a handful of workers and scraps of resources around you. From these humble seeds, you’ll need to steer your guiding hand decisively to ensure survival from a variety of growing concerns. As the winter gets cold the needs of your people shift and change accordingly, and only keen decision-making, and planning will keep you alive. 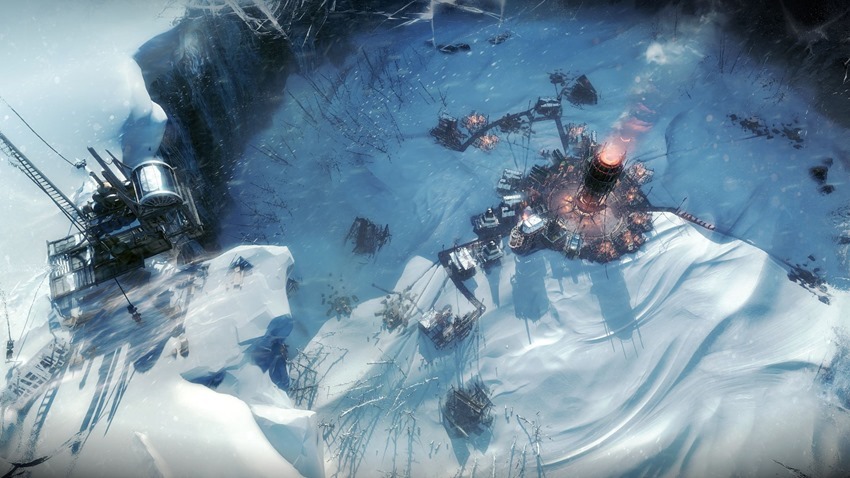 Mechanically Frostpunk has a lot for you to juggle. Resources like wood, coal and steel are paramount to keeping your central generator alive, building new structures like houses and hospitals and researching new equipment to speed up different aspects of daily life. In the frigid wasteland, these are scarce though, and you’ll need to keep a close eye on various meters establishing your current usage and farming balance. Coal, the most important resource of all, is used in nearly every facet of survival. It heats homes and kitchens or allows medical bays to remain functioning. But it’s also continually burning, meaning you limited supplies need to be rationed out in terms of importance before you find yourself with nothing left at all.

Heat is just as important as the resources you farm, and how you distribute it is cleverly implemented in Frostpunk. A useful heat map view shows how your entire settlement is faring at a glance, giving you insight into what buildings are teetering on liveable and which are borderline inhospitable. This impacts your citizens in predictable ways too. Workers in factories that are extremely cold will be susceptible to getting sick faster, which in turn means a trip to the medical bay and a missed day or work. Medical bays will need to be above a certain threshold to even function, leaving the sick to fend for themselves if they don’t. As the sick populous grows the severity of their illness increases, which can lead to deaths and amputations that further impact your ability to keep the city running. 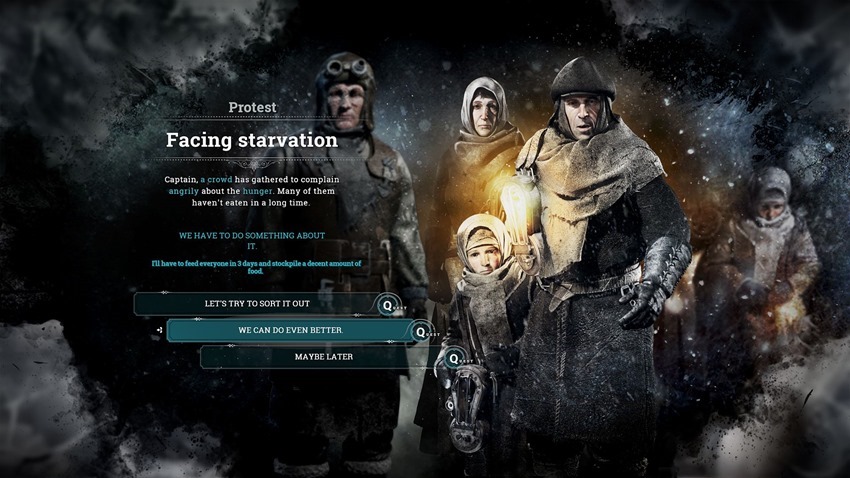 That’s just one example of how the central them of temperature permeates through the core mechanics Frostpunk has to offer, as it quickly turns from a symphony of systems to a chaotic nightmare to manage. It never feels uncontrollable because of a lack of control though. Frostpunk’s user-interface is slickly designed to give you the information you need at a moment’s notice. You can easily see how many citizens are being put to work and where at a glance, with menus extended to provide insight of what specialities you’re assigning to specific functions. For all that’s going on at a given time, Frostpunk streamlines its information that keeps the tension solely on your actions alone, and not through a lack of understanding the situation at hand.

This extends to the city building itself, which is streamlined with the use of an expanding circle upon which you can build. With the generator at the centre, your settlement slowly grows outwards, with all new structures needing to be placed on a circular grid. Buildings don’t need to be parallel to any others, but you’ll need to connect any outliers with roads and service routes that connect directly to the coal guzzling heart at the centre. Planning your placement is crucial though, since heat is dispersed from the generator (and other structures) through limited areas of effect. Misplacing a structure could put it out in the cold more than you’d like, which just has a knock-on effect as the days tick by. 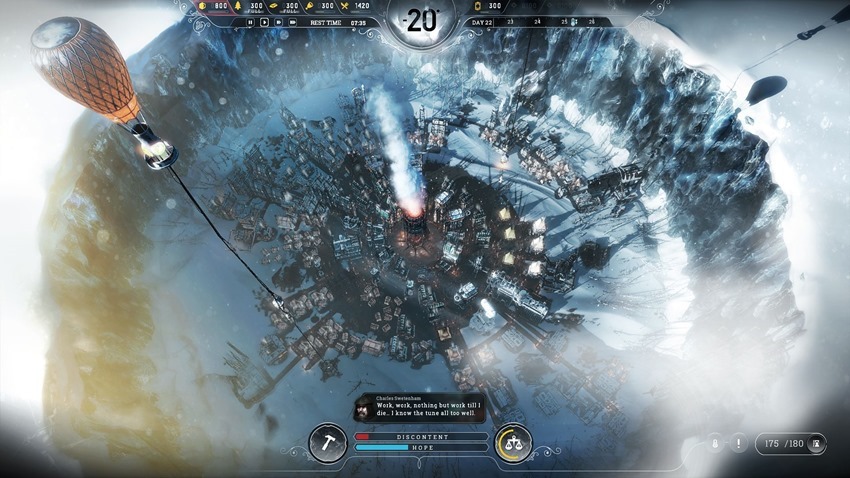 On top of building your settlement to be the most productive it can be, Frostpunk also entrusts you with two moral resources that consistently need to be balanced. In the first scenario, you’ll get to play, this factor out as Hope and Discontent. Let Hope fall to zero, and your citizens will lose faith in your leadership and cast you out into the frozen wasteland. Mistreat them or sign in too many controversial laws, and their rising Discontent will see you’re the same fate. Frostpunk does an impeccable job of thrusting you into situations where the more human decision is often not the correct one for the collective whole, leading to some gruellingly difficult choices that have long-lasting impacts on your playthrough.

Citizens will often remark on their living conditions and propose improvements that should be made within a given time frame. These micro-missions offer you the chance to claw back hope or lower discontent, but with a risk and reward system in place. You can agree to improve their conditions conservatively, giving you a large timeframe to instigate change for a smaller reward. You could, alternatively, over-promise on your delivery, giving you a much harder objective to complete with bigger rewards but greater penalties if you fail. Or you could ignore them entirely, instead realising that the most pressing matter at hand doesn’t involve you building a house for children so that they don’t need to work. 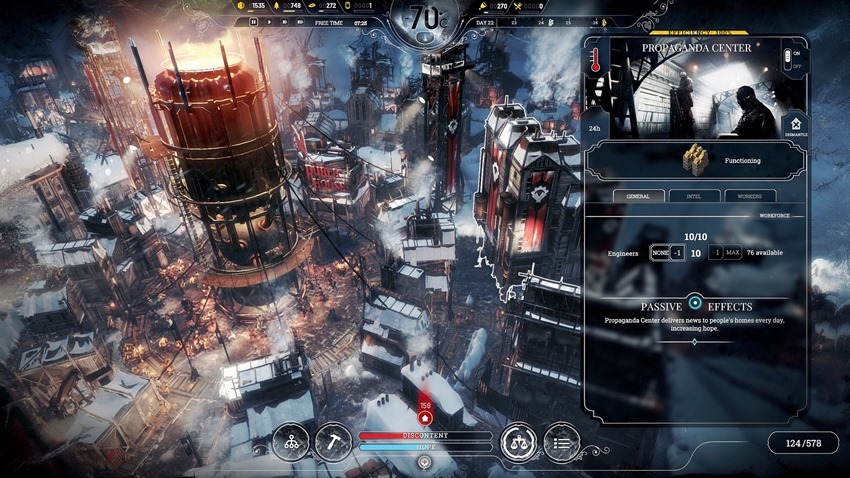 Passing laws ties directly into this morally grew balancing game. Laws can be passed periodically, opening new structures for building or instigating new conditions for existing ones. For example, you can choose to build a child shelter so that adults are more productive at work knowing their children are safe. Or you could rule that children should add to the workforce, putting them either in safe working places like kitchens or harsher, more pertinent ones like mines. You might even choose to educate children in medicine, to help increase treatment times soon. All the laws you pass have a lasting impact on the game and steer your leadership progression in one or two directions. Eventually, you’ll be forced to make tough calls as citizens threaten to leave, sometimes instigating ruthless military laws or subjecting your followers to religious indoctrination to keep them in line.

All these decisions combine into intoxicatingly engrossing runs of sorts, as you struggle to keep your settlement going through harsher conditions before the sun rises properly again. Frostpunk throws problems at you constantly, meaning there’s no minute where you are frantically considering your options and wondering how you might have done better with a decision half an hour ago. It’s best played without frequent saves (although the option is open), instead using your failures in one run to start better afresh on the next. It takes a couple of major errors to finally find the rhythm Frostpunk demands from you, but it’s never dull in its teachings. 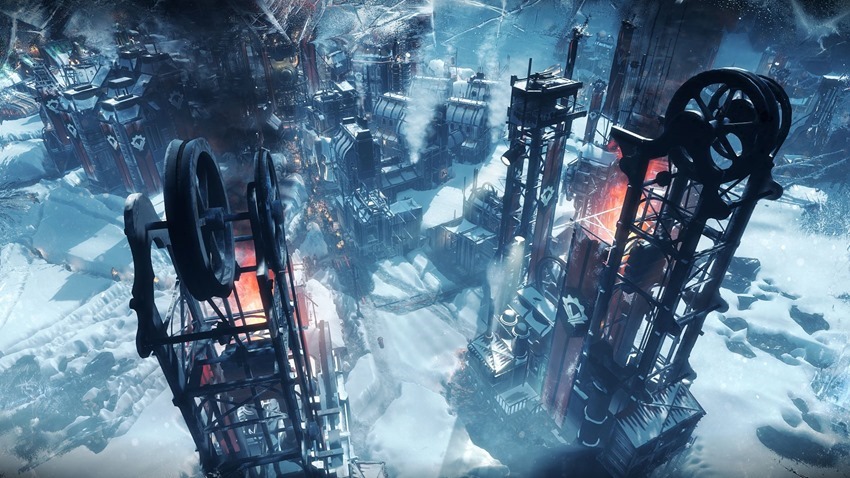 It helps too them that Frostpunk is wrapped in gorgeous visuals, which really drive home the ridiculous conditions you’re forced to operate in. A blizzard of snow worsens as the temperature plummets, the smoke from your single generator rising like a beacon of hope amongst the white death that surrounds you. Heat is conveyed with bright oranges that stand out in the cold, while the models of hobbled together shelters and aged factories encapsulate you in the time-period of the disaster. Frostpunk is bleak and hopeless, but it looks good doing it.

The soundtrack is exceptionally good at complementing this too. It’s hard to think that sorrowful orchestral melodies can convey the sense of cold and hopelessness, but that’s exactly the balance that Frostpunk strikes. You’ll shiver when chimes or lowering temperatures kick in and feel the adrenaline pump when the music swells in dire times. The lowly comments of your citizens pierce through this too, reminding you of the lives at stake should you happen to fail. 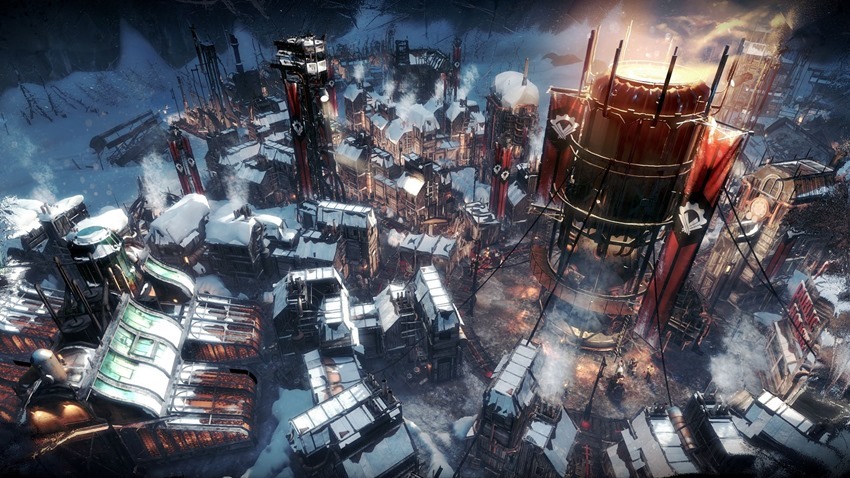 Frostpunk is exceedingly good at nailing the atmosphere it needs to engross you in its stakes, but its attention to streamlining its complex systems and giving you a lot of agency to work with them is the real star of this depressing story. It’s inviting enough for players wary of complex city builders to find some pleasure in, while also testing strategy and planning enough for those well versed in this genre. But its setting and decisions ultimately make it stand out from the crowd, even if you’ll find little happiness in making them.