What a match made in heaven, the only aussie writer on Lazygamer reviewing a game where you play as an insane goat.

So lets get right to it. Is Goat Simulator a must buy? No, but if you want a game where you play as a goat wreaking havoc on a town with exclusively hilarious results, read on. 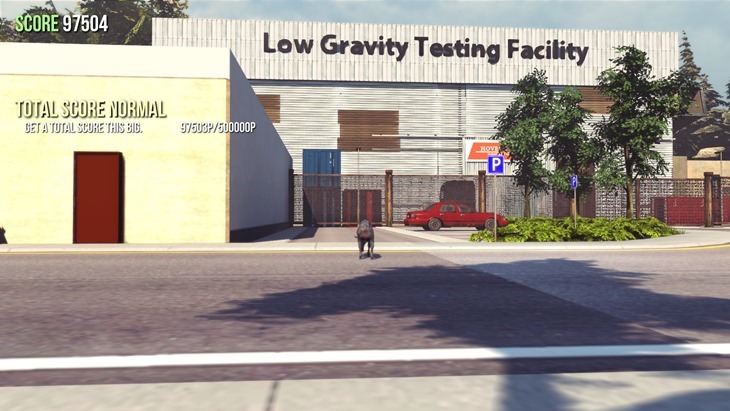 Ok, so, you’re a goat, in a town turned playground for havoc. That’s about it. You control the titular goat with a familiar WASD and mouse setup. Left click rams things, holding right click while jumping allows for tricks to be pulled off in the air like some bizarre Tony Hawk rip off. The E button is used for licking things which then sticks to your tongue so you can drag the object, or be dragged yourself. The controls are actually quite fluent, while still allowing for a level of random physics spasms. 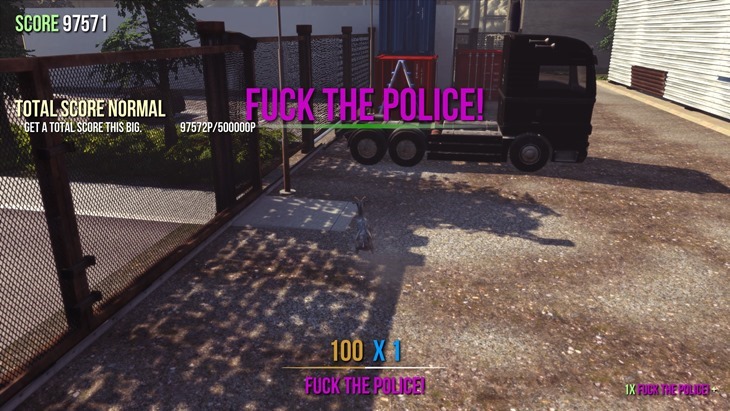 The main game consists of completing challenges related to score, finding and breaking things, or completing certain tricks. The final challenge is to explore the map to collect all 27 goat trophies to unlock goat variants called ‘mutators’, which can drastically alter how broken your goat is. 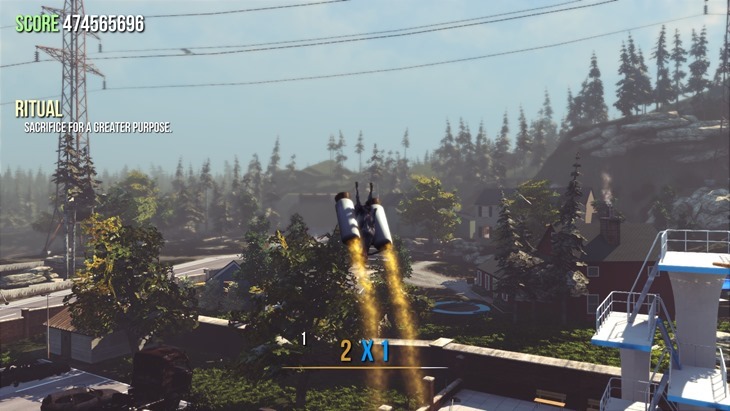 This is a good looking game. Some of the breakable objects look slapped together, but for the most part it has that familiar Unreal engine gleam to it. Don’t be surprised when you find yourself rather immersed in Goat Simulator. The physics engine is really fun to mess around with. Watching people ragdoll into the distance as you blow up a tanker and a gas station with your face, while bits of shrapnel and other broken objects spray everywhere is definitely an impressive sight. The slow motion button is a must with huge Michael Bay explosions.

I wasn’t completely sold on the music at first. It’s a strange distorted melody that gets stranger the higher score combo you get, which fits the style of the game. The good news is that after a while it’s insanely catchy and will no doubt be an earworm for a very long time afterwards. 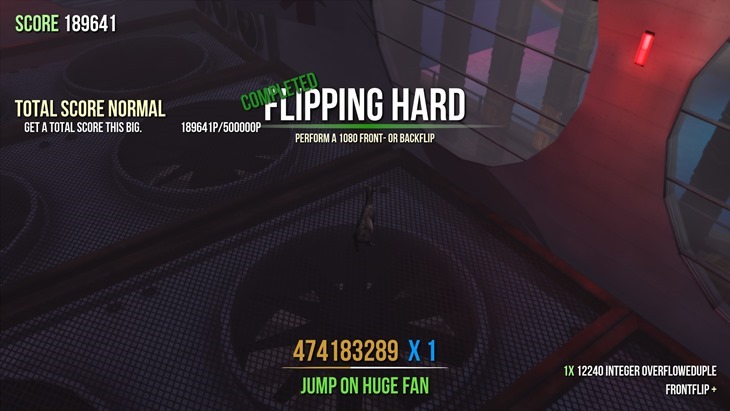 Goat Simulator is a game that embraces its faults a lot more than most. There are bugs absolutely everywhere, which results in some very strange interactions. It’s not fundamentally broken, but it’s easy to glitch out of the map without really trying. The only way these interactions negatively affect the game is the score quests, where it’s rather easy to get the score targets to complete the quest. It’s a feature of the game more than it is a problem. 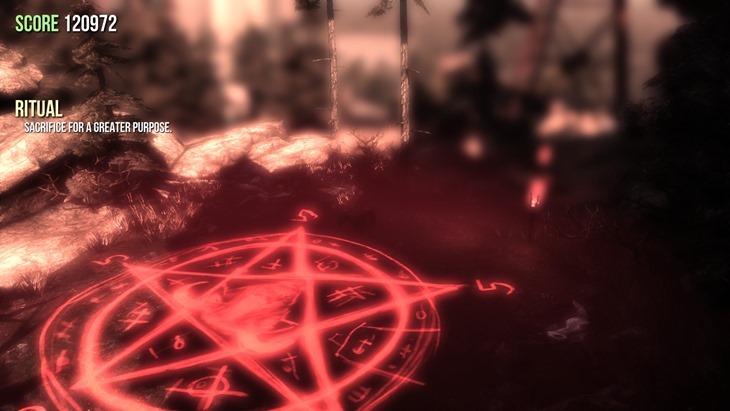 As far as the main  game goes, it took me about 6 hours to complete with dicking around in between. A lot of that time was looking for collectables, which for some reason I felt compelled to do. It promotes exploration of the map, which has a lot to do, and most of it is tucked away just waiting for you to derp into it. 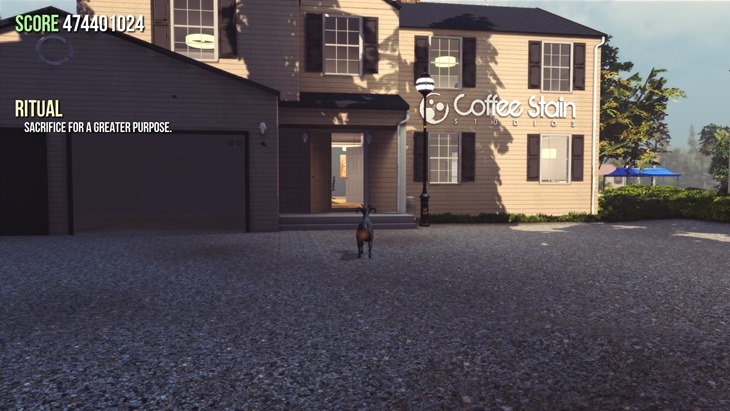 Unfortunately, the map starts to feel rather small after you’ve explored it all. In the distance you see skyscrapers and other regions and you wish you could go and smash stuff over there. But what you do get to play around in is crammed full of references and nice touches that I think people will appreciate. 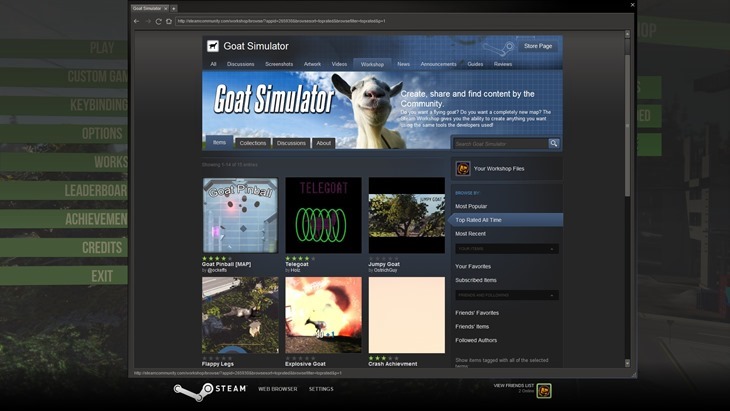 Then there’s the Steam Workshop stuff. There’s not much on there right now, but considering the stuff on there already, I hope people take it to stupid crazy Trials Evolution levels where the best and most creative content is user made. Or like Portal 2, where the user created puzzles add so much more gameplay. I think the developers are relying on Steam Workshop to carry their game forward. It’s a capable engine and I can’t wait to see what they come up with, but for now, it’s rather bare. 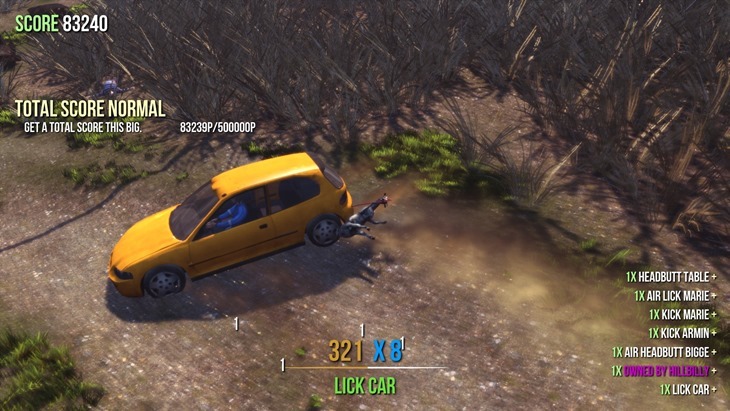 One glaring problem I see is the lack of multiplayer. The best part about Amazing Frog on Ouya ( a similar game with frogs) is its local multiplayer madness. Had that actually been a thing, I wouldn’t have put down Goat Simulator so soon after finishing it.