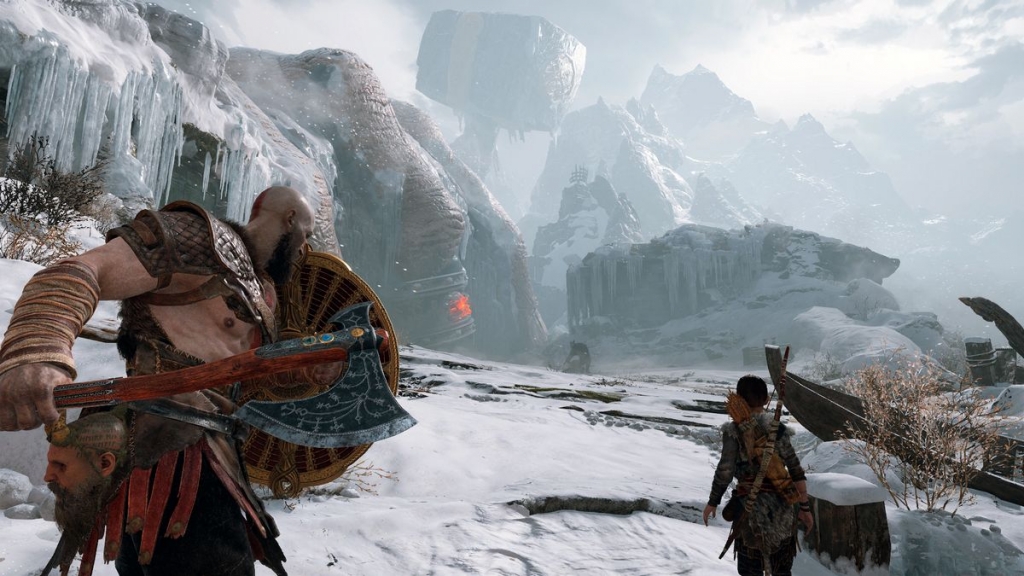 If past God of War games were solely about the Kratos and his fury, God of War on PS4 starts out with the exact opposite in mind. Living in a small wooden cabin in the snowy forests of Midgard, Kratos has built a family in seclusion. Living out in a new world has left the previous god of war to forget his past, but also hide it from his family. It doesn’t take long for the gods of this new realm to figure out who he is, setting off a chain of events that leave Kratos and his son Atreus heading for a distant mountain on the horizon. 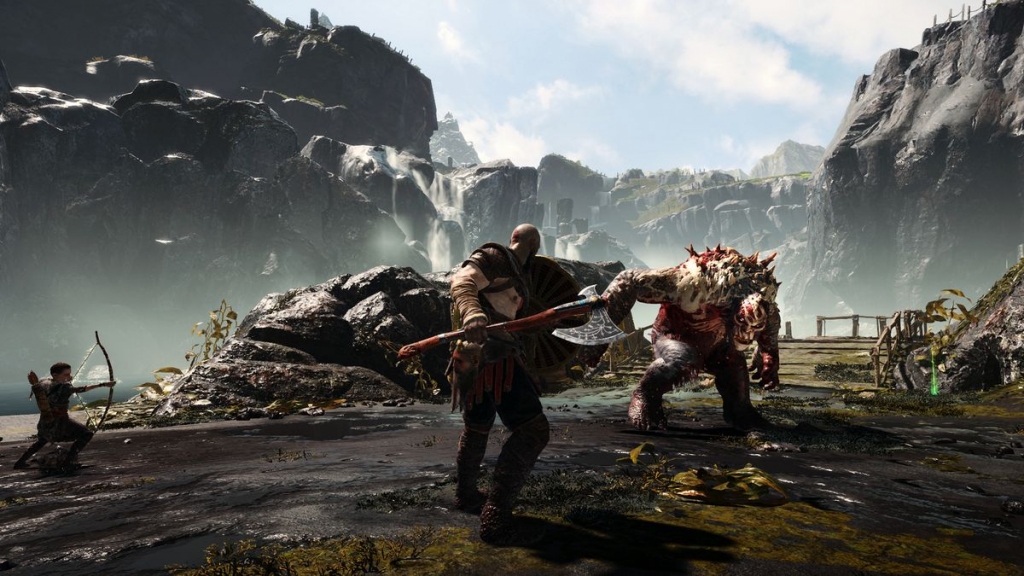 Framing is everything so far in God of War, and it’s lending a lot of heart to a series that seemed incapable of shifting from its monotone attitude. Kratos is a broken man here, having lost his wife and unable to nurture his son in a meaningful way. He’s brash and unforgiving, but small moments show a tenderness that he is incapable of understanding. Atreus, then, is the perfect companion. He seeks Kratos’ approval and wonders why his father now suddenly shows an interest in teaching him hunting. But there’s a secret within Atreus that Kratos doesn’t want to be discovered, and it seems central to both their journey as a family and the well-being of the world around them. 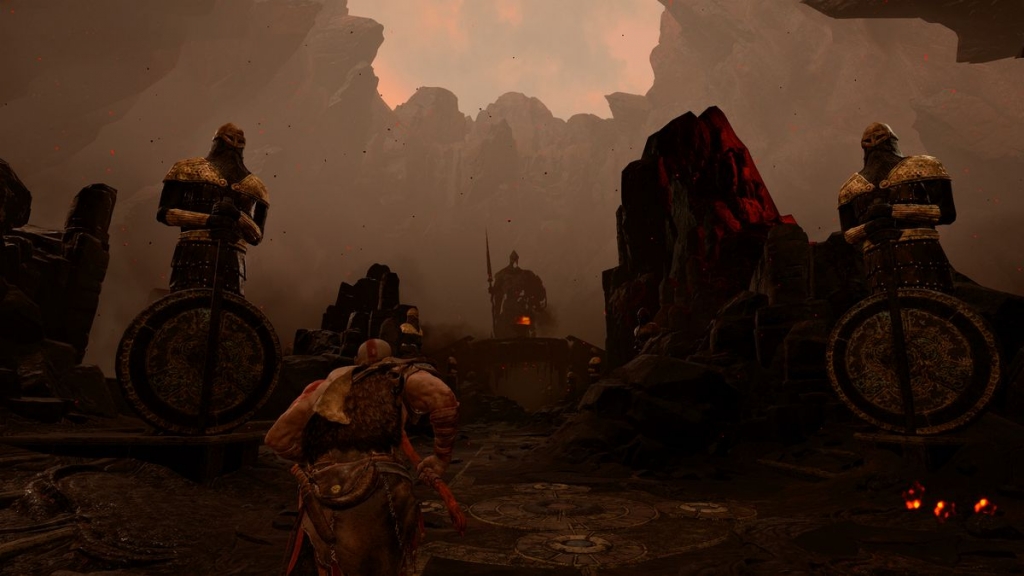 Calm, idyllic life in a wooden cabin is upset by the death of Kratos’ wife, but it’s not until a stranger appears at the door that the gears start to shift. Kratos is a wanderer and, by virtue, fugitive in this new mythological land. New gods reign here, and they seem especially curious as to why a Greek god might want to impose on them. Since everything is told from Kratos’ perspective here (the entire game is a one-shot, never cutting from the scene you start with), it can be difficult to understand what’s happening so quickly at the start. But it opens so many questions that the impending journey will surely answer that it’s hard not to get immediately sucked in. Who was the stranger? Who else is out there? And can a bleeding god survive any of this? 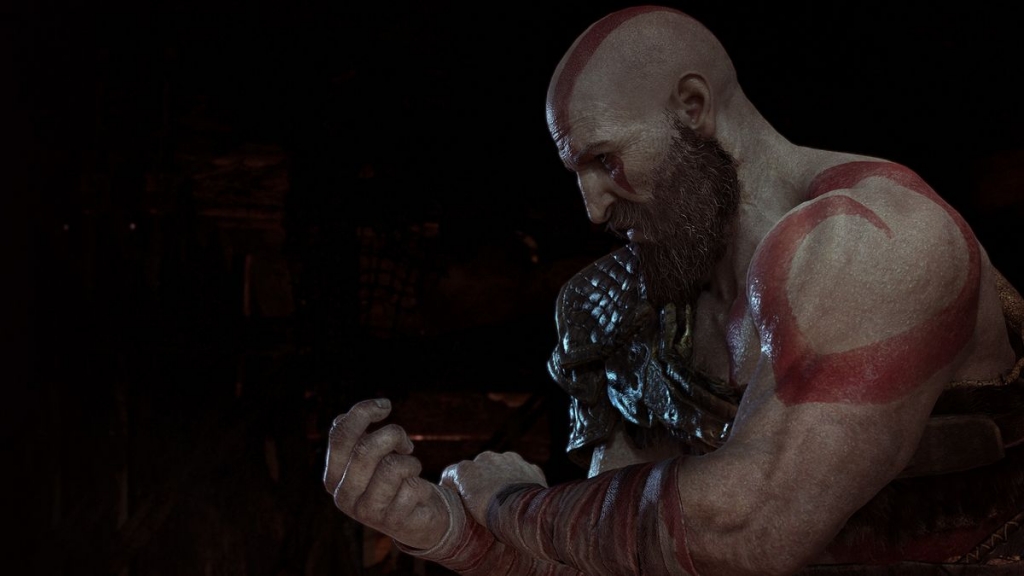 Age has changed Kratos, but so has the entire formula of this iteration of God of War. In the opening moments, Kratos only has two weapons at his disposal: the incredible useful Frost Axe and, well, his bare fists. God of War gives you flexibility and purpose in its combat like no other game in the franchise has yet. The Frost Axe, for example, can be used to lay waste on enemies with light and heavy attacks, each of which connects with ferocity and heft. But you can also toss the axe at a foe n the distance, freezing them in place and allowing for a quick follow up with your knuckles. Recalling your axes is purposeful in every sense too, with a single button press allowing you to send it through the air and back into your hands – knocking any poor soul unfortunate enough to be in the way. 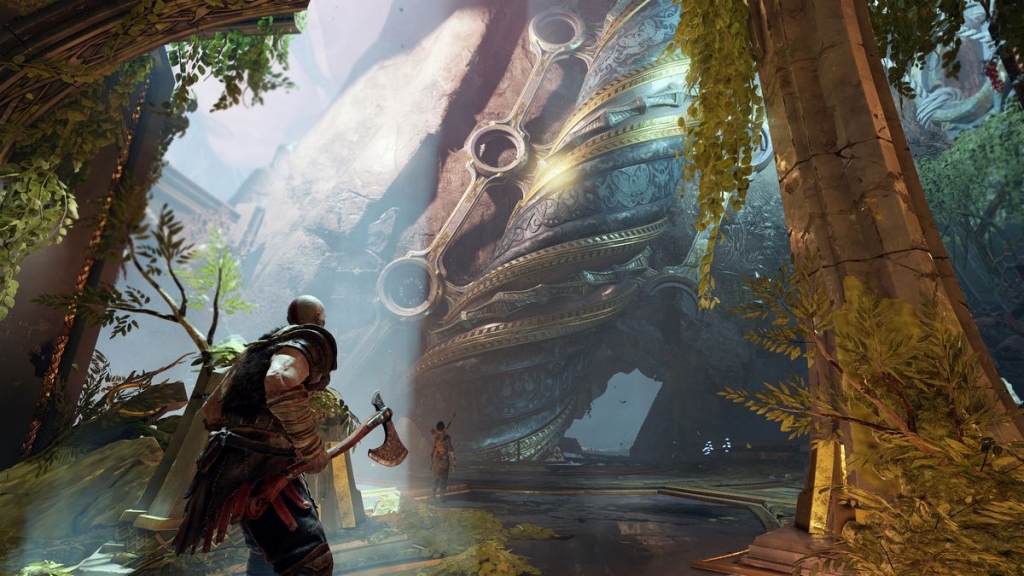 These two means of attack have their pros and cons too. The Frost Axe deals more damage to foes than your fists, witling down their health bars as fast as you can say Zeus. But the bare-knuckle approach builds up a second meter – attributed to stuns – a lot faster. Bigger enemies then might be better suited with this approach. A quick axe toss allowed me to stun projectile-based enemies and gave me the chance to deal with a big bruiser in front of me. Each blow landed built up a stun, giving me the opportunity to initiate a massive cinematic finisher that put the enemy out of commission faster than a flurry of axe swipes. Switching between weapons and approaches already seems paramount to combat in God of War, and it feels great so far. 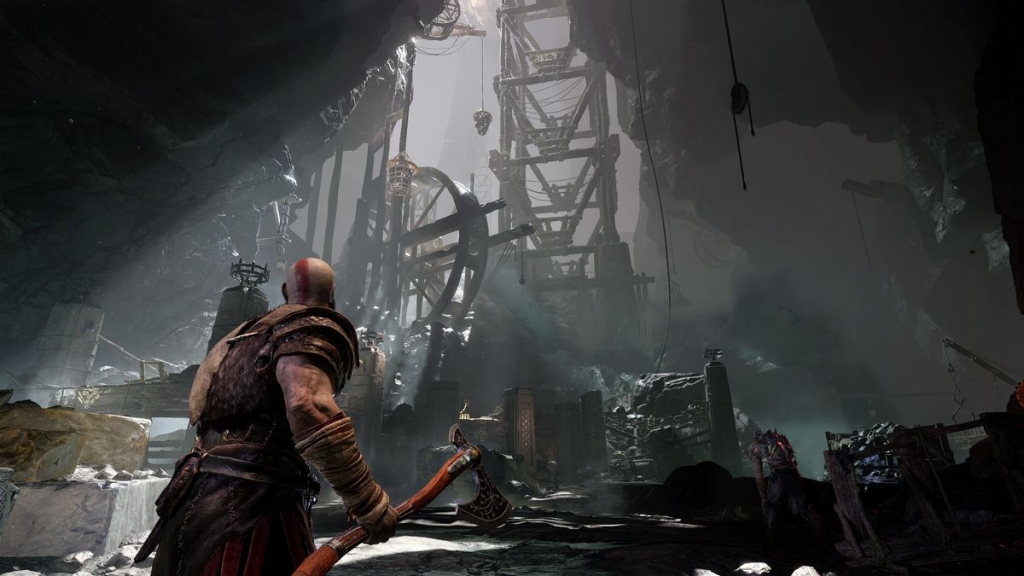 But offence has never been equally matched with defence in this series, and that’s where this reboot of sorts feels most refined. God of War is a punishing game, perhaps because it’s never felt that way in the past. You’re given a shield to use from the start, and intrinsically tying it to your attacks is perhaps more important than landing a blow in the first place. Kratos doesn’t feel like the unstoppable god he has been in the past. A series of hits will drop you to the floor in no time, and some especially larger enemies will give you grief when bundled together in tight spaces. Combat is all about spacial awareness and picking off the enemies that will do the most harm quickly left unchecked. So, combining your projectile abilities with keenly timed shield parries and deft dodges makes God of War’s combat shine brightly. It’s a system that quickly opens itself up, and one I hope to see continually expanded upon during this long journey. 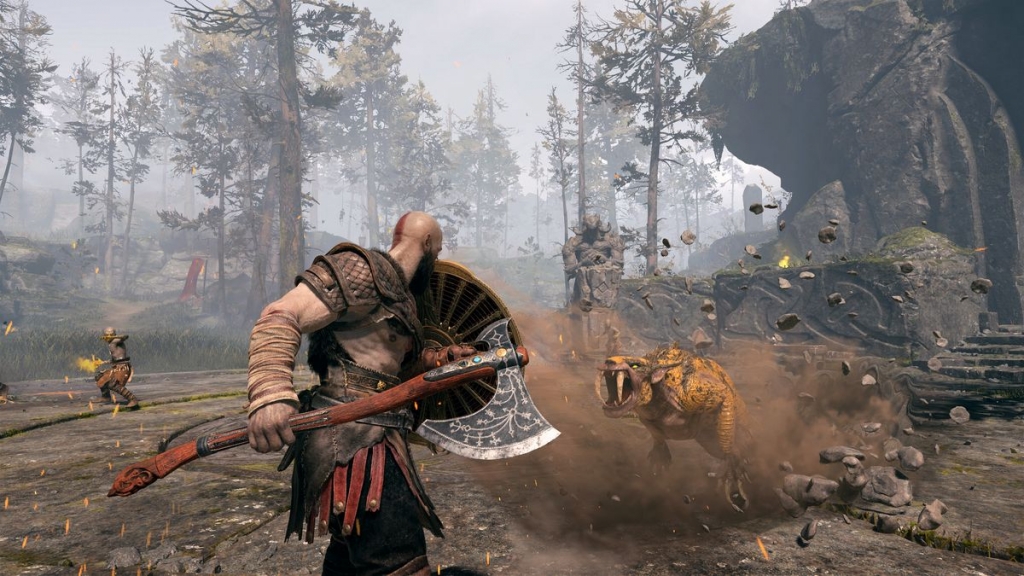 Gear is also expanded in a big way here, with a much more significant emphasis on role-playing than in the past. All of Kratos’ attacks and abilities can be unlocked using experience points (they act as a sort of currency), but gear requires loot that you’ll find strewn around the world, often off the beaten path and hiding in the peculiar crevices in your peripheral. These items let you upgrade your gear in a variety of ways, either tuning them for more damage output, defence and an array of magical effects. Some gear is tiered in the same way loot-driven titles like Diablo classify them. The more rare and powerful they are, the more useful. Some new chest armour I crafted later in my playthrough contained slots for me to put in gems that amplified its defence. Kratos’ Frost Axe has slots too, giving you new abilities entirely based on the rune you slot in. Chopping and changing these seems like it’ll be required for certain types of enemies and used in conjunction with the all-encompassing move set you slowly chip away at. 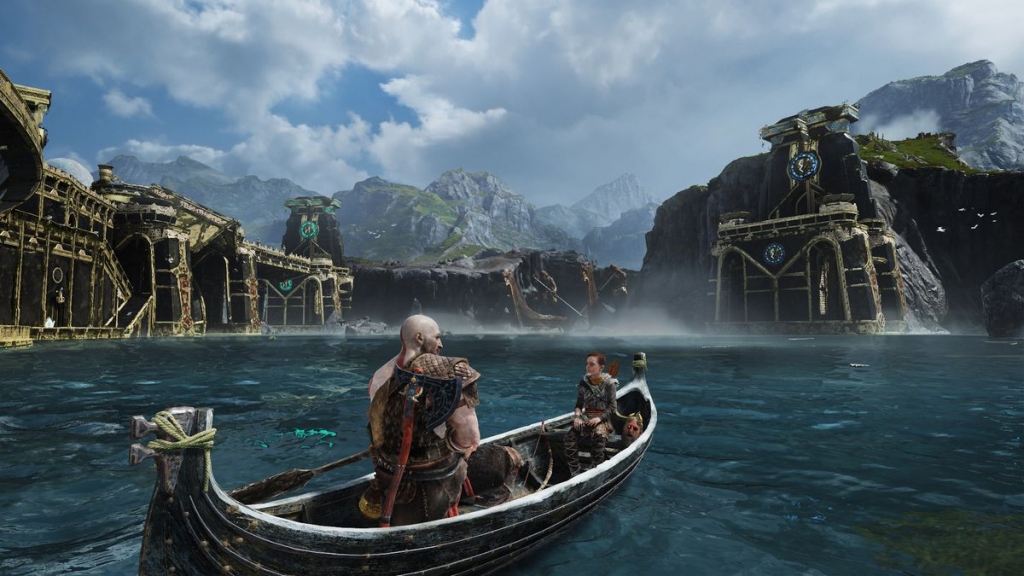 All of this applies to your son, Atreus, too. His gear can be upgraded in the same way Kratos’ can, and he has his own upgrade tree to expand on his move set too. Atreus isn’t a companion that simply watches from the sidelines. He’s active in combat, using his bow and arrow to distract enemies and move the focus away from Kratos at times. Some enemies even require his participation. A fast-moving wraith dodges Kratos’ swings but a fast shot arrow from Atreus stuns it long enough for you to get up close and personal. All of this is active too. You’re in control of when Atreus fires, and must manage how many arrows he has at his disposal carefully during a lengthy battle. It gives combat a dynamic feel, with the prowess of two fighters firmly in your grasp. 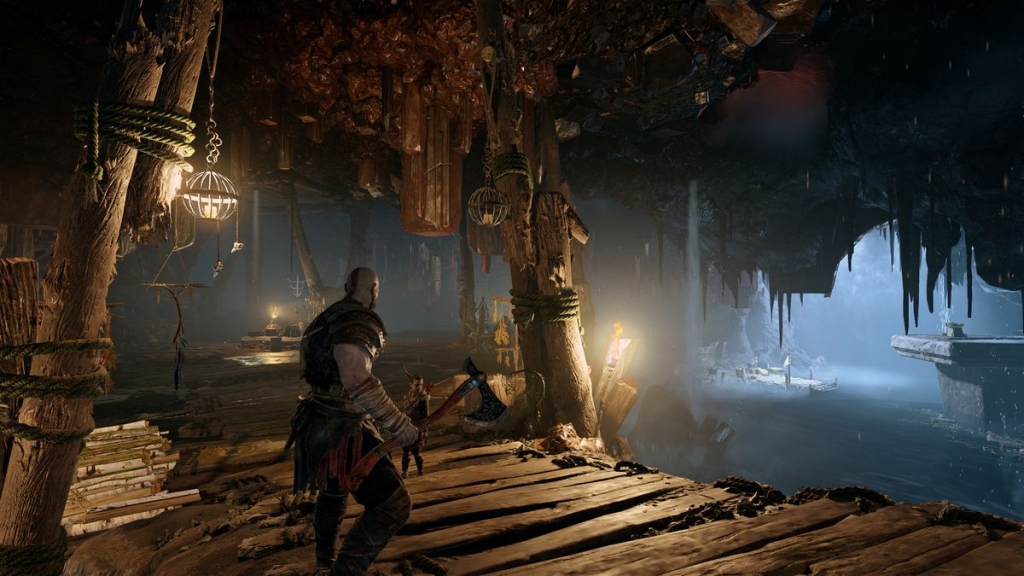 There’s much more on the road ahead, and God of War is very good at sinking its hooks in deep from the outset. Its world is one rich with lore that makes up many journal entries and exciting finds, but its story of compassion and family is what’s driving Kratos and his son forward. It’s a fascinating dynamic to see slowly build, propped up by some clever environmental puzzles and (so far) exhilarating combat. There’s a lot more to see here, but God of War makes a powerful first impression.