Although it’s been disproved that the holiday season is accompanied by a spike in suicides, there’s no question that the period still puts extra pressure on people. There are financial stresses, social obligations and behavioural expectations which all contribute to the likes of anxiety and depression. That makes this time of year then the perfect opportunity to play Hellblade: Senua’s Sacrifice, the multi-award-winning action-adventure that places the spotlight squarely on mental health. Available since early December from retailers as a physical edition for PS4 and Xbox One, the previously download-only 2017 release can now reach an even larger audience. 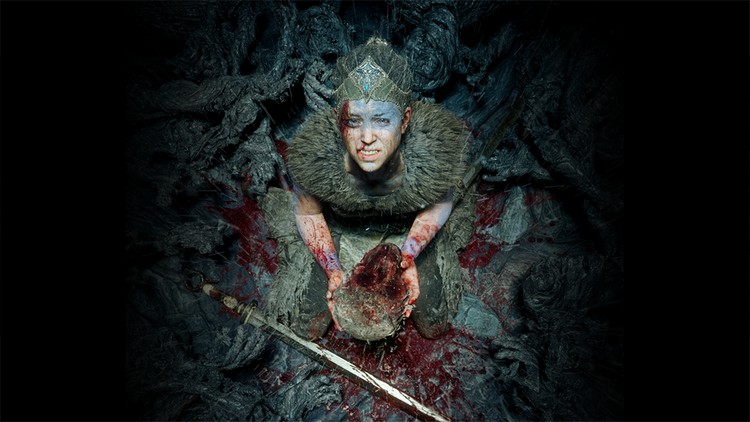 Be aware upfront though that Hellblade: Senua’s Sacrifice is a heavy game. If you’re feeling emotionally off-kilter, it could unsettle you further. Then again, you might find its grimness cathartic. Makers Ninja Theory, of Heavenly Sword fame, don’t downplay the darkness of their most recent title. The game loads every time with warnings about its disturbing content, which include hellscapes and lengthy, distressing scenes of suffering, both physical and psychological.

For the record, Hellblade: Senua’s Sacrifice is a pitch-black spin on the Hero’s Quest. Following a devastating raid on her Orkney village in the 8th Century CE, Senua, a young Pictish warrior, ventures forth into the territory of the Norsemen. A small part of her objective is revenge, but primarily she’s there to enter the dark realm of Helheim and confront the Goddess of Death, Hela, so that she can liberate the soul of her dead lover Dillion. Along the way, Senua has to contend with demonic Vikings, mythological figures and “The Darkness” that has clung to her basically her entire life.

That premise may sound straightforward enough for a fantasy adventure, if clearly orientated towards mature gamers. Except, Senua’s tragedy has tipped her over the edge into psychosis. She experiences hallucinations, both visual and aural, and there is basically a Greek Chorus in her head, continually commenting on her actions. As the player is controlling Senua, they share in her deeply disturbed reality.

Hellblade isn’t the first game to tackle the issue of mental illness – see American McGee’s Alice for a high-profile take on the topic – but it is arguably the most sincere, sophisticated and well-thought-out representation of it in the medium. Plot and gameplay mesh, with perception vs. reality coming into play on multiple levels.

For example, the puzzle-solving component of Hellblade frequently requires the player to either piece together a fractured part of the world or have Senua locate rune patterns in an area. This means manoeuvring Senua through a space, altering her point of view until it matches what is required to advance. At the same time, the player is being told things about the game’s mechanics that aren’t necessarily true. You can’t trust Hellblade’s few and far between instructions to the player just as Senua isn’t really sure if what she’s facing and remembering is accurate.

In support of this bewildering experience, what Hellblade: Senua’s Sacrifice does better than anything else is sound design. Made to be played with headphones, the game uses binaural recording to convey the diverse, continually-shifting voices in Senua’s head. Aiding and discouraging her in equal measure, the voices dance about Senua (and the player) in a highly realistic, multi-dimensional manner. And although the game tackles psychosis, the most demeaning, hopeless and guilt-loaded comments hissed by Senua’s inner voices will be recognisable to anyone who suffers from depression.

On a more positive note, Viking chanting and more contemporary music is used to great effect in highlighting Senua’s most triumphant moments of battle.

Hellblade: Senua’s Sacrifice is not a long game but it’s a haunting one. Even in its quieter puzzle-solving moments, a constant sense of unease slithers under the surface in a way that’s reminiscent of Alan Wake. During its most intense moments, meanwhile, the game plunges Senua and the player into recognisable nightmares like fleeing blind from a relentless pursuer, and realms of torment filled with blood, flame and writhing, grasping hands.

Few games will make you feel as continually anxious as Hellblade, and a lot of it boils down to the fact that it never loses focus on its core concept, namely that “The greatest battles are fought in the mind.” All of the game’s elements are united in conveying this. Of course, it doesn’t hurt that Hellblade is an indie title with AAA production values, which come through powerfully in the art direction and award-winning performance capture by video editor (and surprising non-actress) Melina Juergens. Juergens’s wide, ultra-expressive eyes draw you in at the same time they reflect Senua’s distress.

It’s not all doom and gloom, though, if you think the game will be relentlessly depressing. There are moments of great beauty, and happy memories of Senua’s relationship inject light literally into proceedings. Plus, guiding Senua along with the voices is Druth, her deceased friend and former mentor. Druth’s story is as dark as Senua’s but his pithy observations and encouragement do help to lighten the mood. Plus, he relates stories from Scandinavian myth and legend that parallel Senua’s own quest, and collecting these tale fragments becomes one of the game’s narrative pleasures.

Hellblade: Senua’s Sacrifice is clearly a special, artistically-minded experience. Unfortunately, like a great deal of art, it doesn’t attempt to make itself accessible. You have to work for everything. Hellblade has no tutorial, no HUD; the most you get is occasional advice from Senua’s internal chorus, and even then you need to consult the Controls guide to see what the instructions refer to.

It can be argued that gamers have become too used to hand-holding – press X to Jason and all that. Hellblade’s biggest problem, though, is that the game’s combat frustrates and thwarts the advance of players who want to delve into its thematic meatiness but aren’t used to its take-it-or-leave-it playstyle. Even on Easy, there’s no way around the frustrations of the fighting until you master its need for well-timed parries and dodges, which charge up the slow-motion Focus essential to get you through later battles. Even on Easy, wave after wave of monstrous, deformed Norsemen and gods just keep on coming. And should you die, you have to restart the battle right from the beginning. 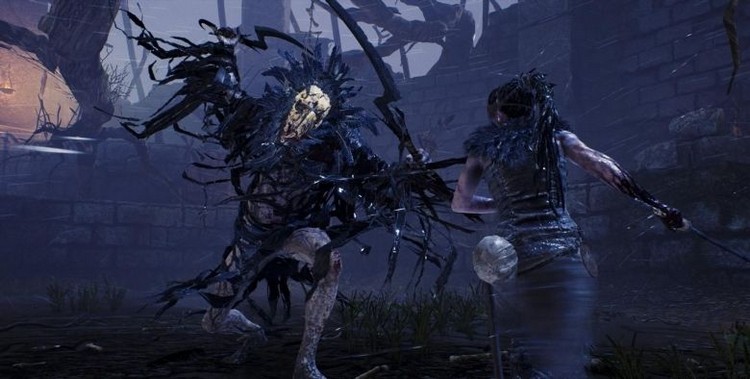 Given these circumstances, making it to the end of an epic fight does provide a sense of triumph, but mostly each encounter, which never really escalate in difficulty, feels like a boulder toppled in the player’s path. Combat is requisite to most video games, of course, and it’s refreshing to see someone who suffers from mental illness still being held in high esteem as a warrior (cough, it’s not a weakness, Crystal Dynamics).

This said, there’s also nothing wrong with more cinematic games. Life is Strange was a powerful emotional experience and its gameplay element was minimal. Hellblade fits into a similar bracket, limiting its gameplay to puzzle-solving and sword-fighting on repeat. The biggest issue is that the latter quickly becomes a slog that saps your enthusiasm – although maybe that’s the developers making another comment about living with severe mental illness.

Despite its frustrations, Helblade: Senua’s Sacrifice is still worth struggling through if necessary. It instantly established itself as a contemporary classic when it debuted in August 2017, and now more people have the opportunity to experience its all-round sophistication and ambition. Regardless of anything else, it’s an unsettling journey to Hell worth braving because there’s nothing quite like it for showing what gaming can do as a mature creative medium.

Hellblade: Senua’s Sacrifice is available as a digital download for PS4, Xbox One and PC. Since December 2018 it can also be purchased from retailers as a physical edition for console.