Tokyo RPG Factory is a little development studio Square Enix formed in order to create smaller, old-school JRPGs. Their first game, I am Setsuna, was a great initial attempt at this, delivering a sad tale of a girl, forced to sacrifice her life in order to save the world. It was meant to feel nostalgic and look similar to games like Chrono Trigger. Nostalgia proved to be a crutch for the game however as it failed to truly create an identity of its own, even though it was an enjoyable experience in its own right. Lost Sphear is their follow-up title, and I had high hopes that the game as well as the studio would come into its own, and for the most part, they succeeded in doing this, even though they took a few steps backwards in the process. 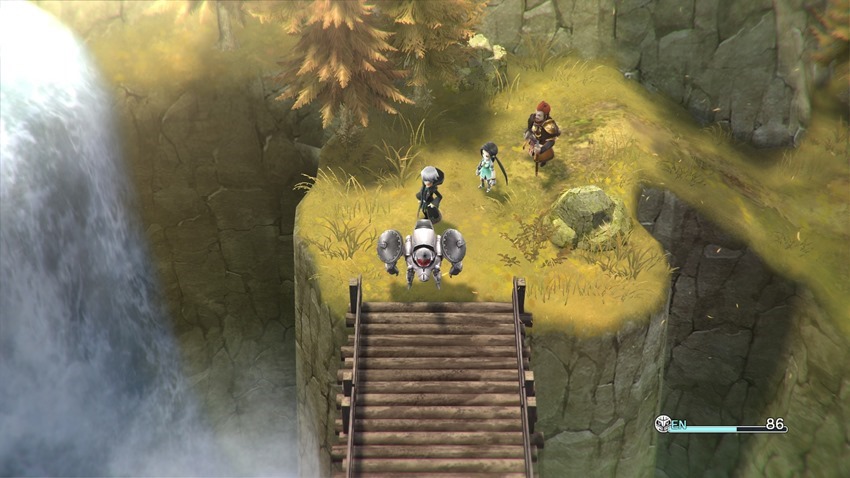 The narrative of Lost Sphear revolves around an unexplainable phenomenon where parts of the world, including people, towns and chunks of land, are suddenly disappearing and becoming what is known as Lost. You take control of a young boy named Kanata who seems to possess a weird ability, capable of bringing back the Lost using the power of memories. Kanata and his friends then set on a journey to use this newfound power to save the world.

The set up for story is an interesting one, even though it falls into the ‘group of youths saving the world’ JRPG trope. Kanata has to actively seek out pieces of memories which are used to restore pieces of the world as well as people. For instance, to restore a Lost scientist, you have to speak to people who knew this person, and during the conversation you’ll get a prompt to extract a memory out of a particular sentence relating to that person. Gather enough memories and you can bring them back. It’s a neat way to incorporate the narrative into the actual gameplay, and it goes a long way in keeping the player engaged in the story. While this mechanic is most definitely a step forward in terms of storytelling, the characters and writing takes a much more reserved and safe approach. For better or worse, Kanata and his crew are very much what you would expect out of a typical JRPG group. You’ve got the energetic and tomboyish female childhood friend, the impulsive and younger kid-brother type character, an arrogant but sort of kind person who is constantly making fun of the younger kid as well as an older, daddy-like companion. The writing only further portrays these characters as stereotypical by inserting unnecessary gags and making them seem almost uncaring about some of the pressing matters happening in the world. This kind of characterization and writing is nothing new to those used to JRPGs, but it’s a major step back from I am Setsuna, and it does hamper what is otherwise an enjoyable tale. 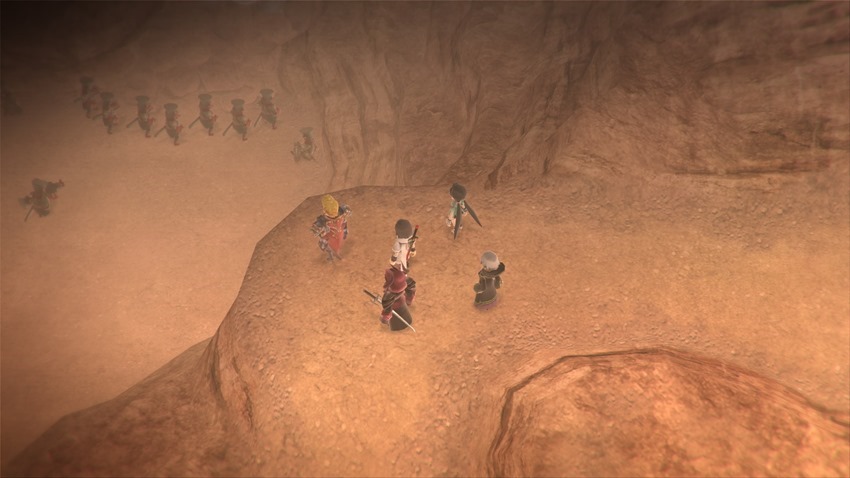 While the writing and characters most definitely took quite a few steps back, almost every other aspect of the game has been improved upon. As I mentioned before, you’ll have to use memories to restore the Lost pieces of the world, and these memories can be found everywhere in the environment, and not just through dialogue. When out on the world map, you can place artifacts at certain points to restore that Lost part of the world. An artifact grants various global bonuses and effects such increasing traversal speed on the world map (which is a Godsend), showing a mini-map and numerous other combat advantages. It’s a great way to get you to explore and find memories so that you can try out different combinations of artifacts. The biggest improvement this game has made however is in its combat system.

While combat looks largely the same as in I am Setsuna, in that it’s turn-based with an ATB (Active Time Battle) system, there’s one key change, and it’s that you can now move your characters. When it’s a character’s turn you can now position them anywhere on the battlefield, allowing you to line up your attacks to target multiple enemies or so that your AOE support skills, when used, extends to other members in your party. It’s a fantastic change that adds a great deal of depth to combat as you’re not just thinking about your position relative to your teammates, but to the enemy as well, as they have some wide-reaching and devastating attacks that can be avoided should you be out of range. Apart from that, it still has the Momentum System wherein you build up charges to activate an extended attack by pressing square just before a hit lands. 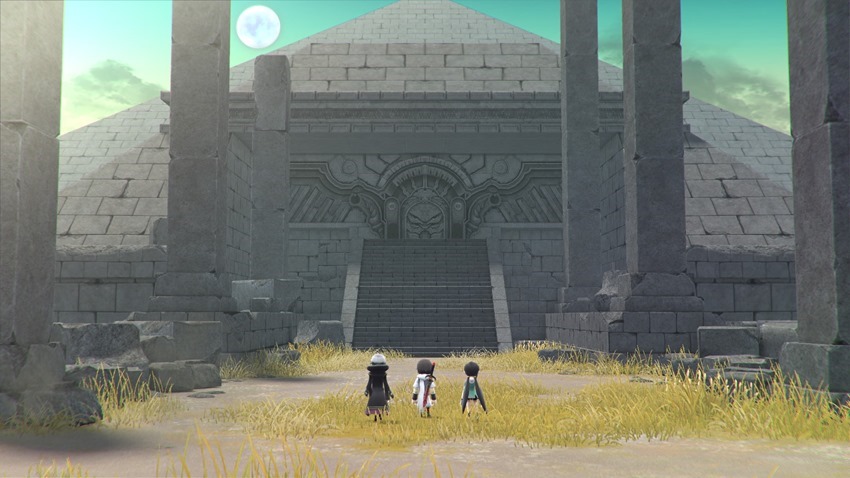 There is much less focus on combo attacks now than there was in I am Setsuna, and it’s a better experience because of that. Relying too heavily on combos meant that if you found a powerful enough one, it would just be reused all the time. Now, you have to think carefully about which skills to use. Each character can equip a set number of skills, and when used in battle, will have a recharge period before it can be activated again, meaning, you won’t be able to spam the same attack over and over again so you have to actually plan ahead. Skills themselves can be further enhanced by attaching Momentum modifers to them, which are various effects such as self-healing or attaching elemental properties to a skill when Momentum is used.

These skills can even permanently gain these modifiers and can store up to ten of them, meaning a single skill can have up to ten effects attached to it. There is a crazy amount of depth to this system, and I love how much freedom and options this game gives you to build your characters. As of this review, Lost Sphear also received a patch which added a hard difficulty mode as well as adjusting the balance of combat. I played the game on hard and it absolutely requires you to use all of these systems strategically as some of the encounters can be quite brutal. 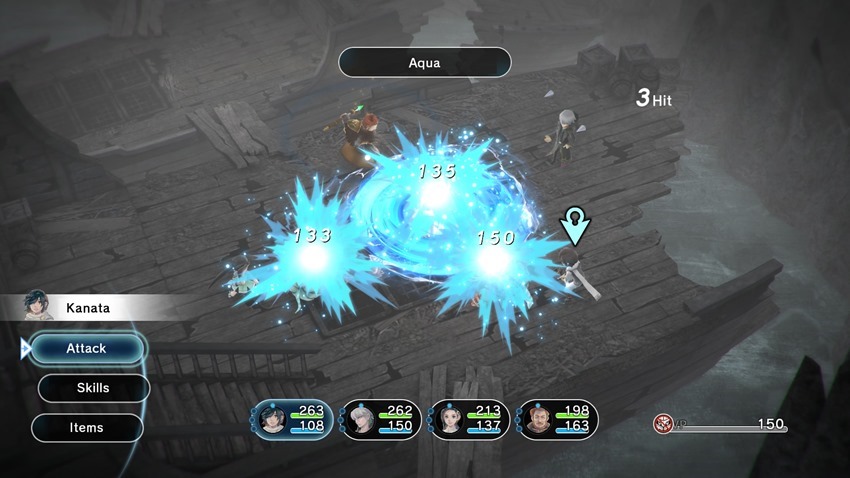 The final addition to the game comes in the form of the Valcosuits. These are mechs your characters get pretty early on in the game which you can use in and outside of combat. These mechs have their own set of special attacks and properties, such as Kanata’s one giving him the option to use combo attacks with his other teammates. While I do like this idea in concept, using them expends a separate gauge, which is not easily replenished, meaning you won’t be using them that often. Still, it adds a little bit more to an already stellar combat system.

The overall presentation of Lost Sphear is nothing special, really. It’s an improvement over I am Setsuna in terms of environmental variation, but the less sombre and melancholic feel makes it feel much more pedestrian in comparison. It doesn’t help that some of the enemy assets gets reused here too. I do however appreciate that the soundtrack is not just fully composed of a piano and that it features a wider spectrum of musical sounds. Most the tracks work well and even helps elevate scenes where the writing is particularly bad.

Lost Sphear is an enjoyable game, one that harkens back to the JRPGs of old but still manages to create an identity for itself. While the writing and characters might be lacking, the overall story is an engaging one and coupled with the fun battle system and staggering amounts of customization options, it managed to keep me hooked all the way through.

Lost Sphear is a bit of a hard sell to people who are not fans of JRPGS and even though the writing and characters are quite stereotypical, the story has a lot of heart. The battle system and customization options make for a fun game.