There’s a lot to love about a good game of tennis, and thankfully Mario Tennis Aces understands that at its core. Its matches are fast-paced bouts with the ball, with a series of slices, lobs and low shots giving you control over the flow of a game with a fierce opponent. But while Mario Tennis Aces is a good tennis game, it excels at being so much more too. With a series of intriguing and confusing mechanics to inject into regular tennis fare, Mario Tennis Aces squeezes into a new type of genre entirely in a package that is full of content for variations of play. 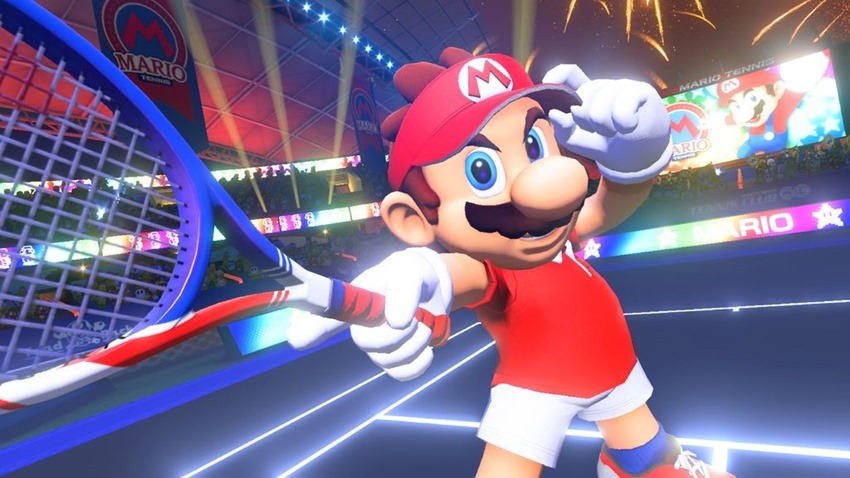 Mario Tennis Aces gives you a lot of control when you want to return that perfect shot. Three face buttons let you either return using topspin, a slice or a hard and fast low return, each of which has their uses in specific situations. A fourth option allows you to return using a classic, embarrassment inducing drop shot or over the head lob, making your situational awareness key to succeeding. Every one of Aces’ characters specialises in some way to help bolster each of these core principles. Chain Chomp can deliver powerful returns but is slower to move around, while smaller characters like Yoshi or Toad are the exact opposite. Who you choose is more about playstyle preference over direct counters to opponent picks, but it’s nice to feel a tangible difference between the cast that helps bring out the elements in the standard tennis game that interest you most.

Of course, Aces’ isn’t just a regular tennis game. With the standard shots and returns comes more tricky energy management elements that you’ll have to wrestle with during each game. A long rally or powerful charged up shots (which root you in position, and are hence more risky to execute build up energy in a bar in your HUD, which allows you to engage a handful of powerful, game-changing moves. A hold of one trigger will put the game in slow-motion and let you nab that delivery that got away. An easily returned ball will feature a star around it that you can use a bunch of energy on to enact a “Star Shot” – a fierce delivery that you can aim in first-person. This is only topped by each character’s special move, which requires a full bar to pull off but usually ensures an easy point or clutch defensive return. 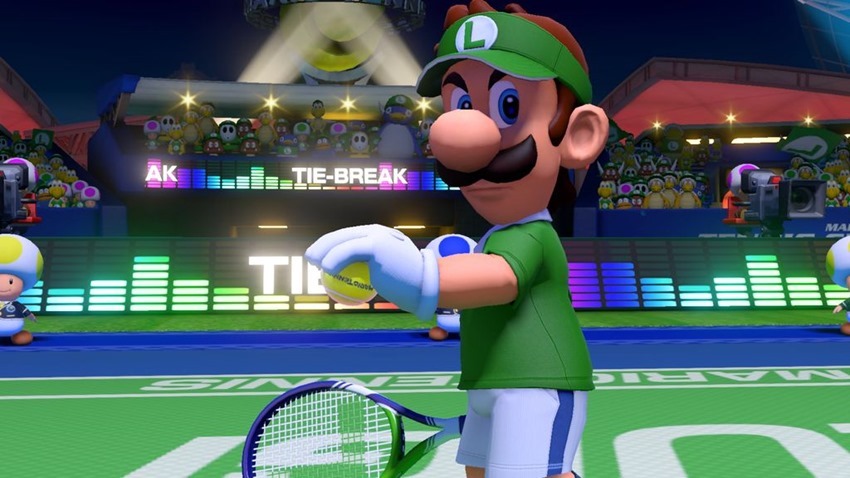 Using energy in Mario Tennis Aces is a lot like a fighting game. So many of them today use the same system to help augment regular play with a bit more strategy, and the same works here in Aces. Good players know when to use their meter most effectively, and poor ones will often forget it even exists. Knowing when to charge a shot and build up some juice could influence the two-point down the line where a star-shot is the difference between a won set or another round of deuce. The range of uses that Aces offers with this seemingly small change is large, and learning to use it all to your best benefit takes some extensive play to really master.

These additional moves bring with them their own sets of unique stakes too. It’s strange to think about, but Mario Tennis Aces actually has to methods of winning a match: the standard Game, Set and Match rhythm, and a ruthless battle to knock your opponent out. Or rather, destroy all of their disposable rackets to leave them a weeping mess on the other end of the court. With each of these powerful shots, you can choose to attempt to block them and return. Mistime it though, and your racket will take damage. Massive character special attacks will sometimes wipe out a racket entirely if not blocked well enough. Run out and you lose. Even if you’re just a single point away from winning. 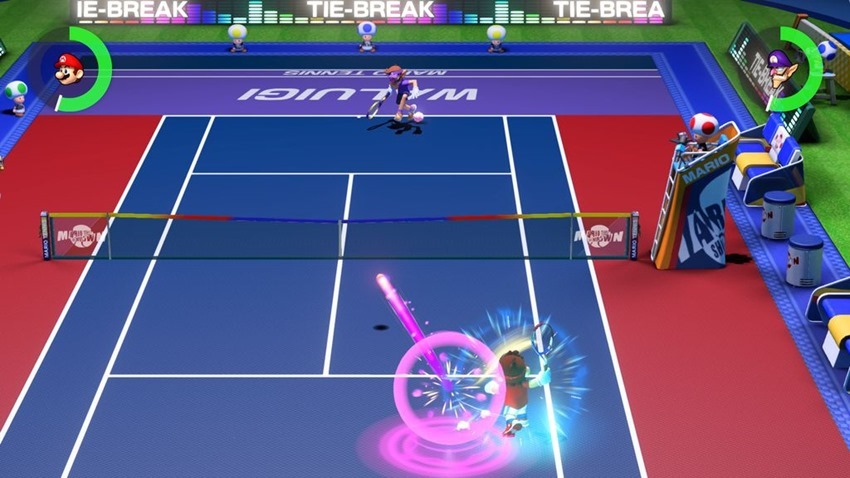 It adds a unique twist to standard tennis action, and one that encourages aggressive play. You need energy to charge up these abilities that let you damage an opponent’s racket, so it’s in your best interest to keep rallies going as much as possible before you strike. You’re no longer looking to just play a ball into a corner, because your time is limited based on your desired approach. You need several whacks at your opponent to take out their library of rackets, so being indecisive about whether you’re going for points or power often leaves you stuck in the middle unable to excel at either.

Good players can expunge energy to enact risky method for dodging, but it comes at the expense of not being able to use their own series of special moves too. Mario Tennis Aces strikes this really good balance of energy management that makes it feel like a lot more than just a ball bouncing between a court. The additional options reinvigorate a formula which arguably doesn’t need it, but it’s still appreciated given how drastically different it can make the arcade sport too. Don’t fret if it all sounds overbearing though – Aces offers options to strip out all the extra fighting game fluff if you desire from both local and online play. 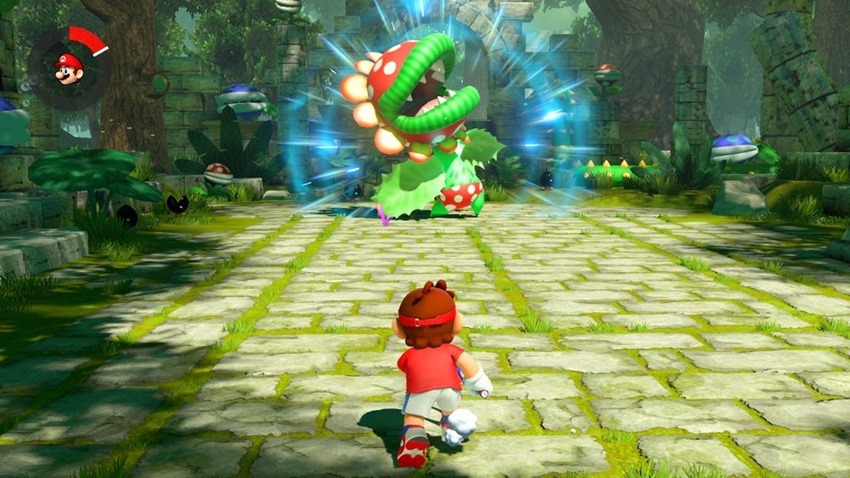 Mario Tennis Aces does a decent enough job of tricking out tutorials for all of these different elements too, and encapsulates them in a punchy campaign. Its story is throwaway if not slightly hilarious, if only for how ridiculous it seems that every problem is solved with a game of tennis. What is far more intriguing is the ways Aces messes with regular tennis rules to create engaging puzzle events and tough and nails boss fights. It’s rare for Aces’ campaign to actually have you playing a normal round of tennis, instead pitting you against giant squid with specific attack patterns to trains full of shy guys lobbing snowballs at you.

Each of these stages presents an opportunity to learn something deep about how Mario Tennis Aces works, but without coming off as a glorified tutorial. The aforementioned Giant Squid, for example, was a series of trick shots to avoid its tentacles, while timing blocks correctly to deliver some damage. The many boss battles of this ilk mess with the same formula, sticking strictly to the “three lives and you’re done” format that so many regular Mario games have. Other challenges can be both as engaging and rather disappointing at the same time. One event has you frantically clearing nets from the other end of a court, with point bonuses for strategic use of Star Shots. It’s fun, but it’s reused three times throughout the campaign to the point of tedium. And despite looking like you have choice in what events you engage with, Mario Tennis Aces doesn’t let you stray from events you don’t want to play. 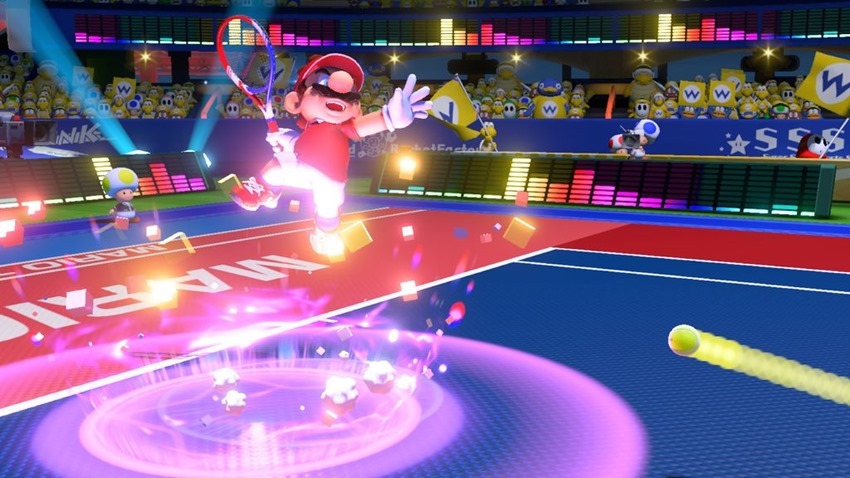 A lot of this has to do with Mario Tennis Aces’ wonky AI, which only seems to flip between two modes: Overly forgiving or punishingly brutal. Early matches will seem like cake walks, with foes hardly able to return the simplest of strategies and cross court shots. But other times it almost seems Mario Tennis Aces is forcing you to play in one way, and one way only. Specific foes during the campaign seemed impossible to get a shot past, forcing me to resort to finding ample time to destroy his racket. The change of pace was welcome, but the sudden spike in difficulty was jarring enough to make it feel unpleasant.

This permeates into the other solo modes, which are sadly just a series of three limited tournament modes. The first is virtually pointless for anyone playing Aces seriously, as opponents make hardly any effort to return any balls. Perhaps with a younger player or those looking for a more laidback game of tennis, this is perfectly suitable. But it makes no sense when the tournament directly afterwards doesn’t ramp up the difficulty in a gentle way. There seems to be no middle-ground to Aces’ AI, and that’s just disappointing for both casual players and those looking to practice properly for online play. 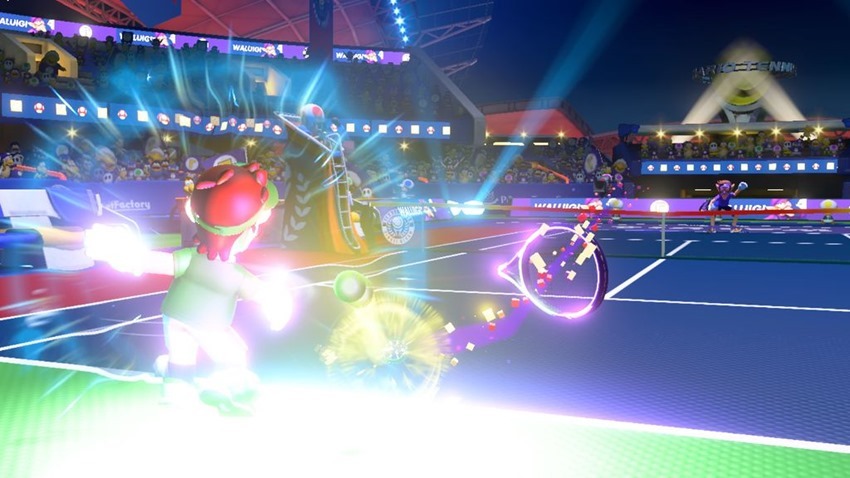 Online tournaments are really where Mario Tennis Aces and its many mechanics shine. As it was in the beta, other human opponents offer the sort of variation and unpredictability that makes each of these complex cogs click into place. You’ll easily jump from one match feeling like a Mario and Nadal combination that can’t be stopped, only to hit the clay hard when an opponent finds easy flaws in your defence. It’s fun to learn the intricacies by playing through them in tough matches, and it has the addictive nature that has made games like Mario Kart so successful. If ARMS wasn’t the online fighting game that Nintendo wanted it to be, Mario Tennis Aces is certainly picking up the slack.

It might be intimidating to go into Mario Tennis Aces with all this complexity to face, and at first it is. The range and breadth of just an arcade tennis game is blown out of the water here, with Nintendo clearly trying something entirely new with a franchise that failed to hit in its last out. And with a strong online structure and enough depth to have you learning consistently in the months to come, a foundation has been established for another strong Nintendo online title. It’s just a pity that those looking for something outside of that are straddled with sub-par AI opponents and limited modes to engage with.