I was taken aback by the opening scene of Next Gen. With no dialogue whatsoever, we witness a little girl’s father walk out on her and her mother. The girl lovingly cuddles her dog and sometime later, the mother unwraps a Q-Bot, choosing to focus on her newly-acquired robotic companion and not on her daughter. It is a great piece of visual storytelling and is not done justice by the rest of the film that follows. That is not to say that there is nothing to Netflix’s latest film for its younger viewers, but there is a bit to talk about.

Directed and written by Kevin R. Adams and Joe Ksander, Next Gen visualizes a not-so-distant future where humanity has embraced an existence alongside robotic companions and aides (insert to-be-expected commentary here). While attending the launch of the next-generation of Q-Bots with her robot-obsessed mother, teenager Mai Su (voiced by Charlyne Yi) comes across and befriends an experimental robot designated 7723 or “Project 77”, voiced by John Krasinski. Starting out by using him to fight the school bullies and take her aggression out on other robots, Mai soon discovers that not only is there a friend to be found in 77, but also that the high-powered weapons he has stashed away in his body were put there to combat a rising peril. Namely, the nefarious plot of those that humanity has come to rely upon.

Though you may not have heard of them, Kevin R. Adams and Joe Ksander are long-time professionals of the film industry. Primarily working as art directors and animators, Adams’ credits are comprised of numerous 2000s Disney movies, while Ksander’s name can be found on blockbusters like Pacific Rim, X-Men: First Class, and Transformers: Age of Extinction. Animation is both their game and in Next Gen, their talents are on full display.

The film is beautifully constructed, making good use of light and shadows, and a colour palette that is easy on the eye and that complements the overall visuals and pretty great animation. The directing is competent, and the writing yields a solid narrative and a relatable main character in the form of Mai. The writing also refrains from using topical slang or references that will eventually become dated. An approach that animators from the likes of Sony have yet to comprehend.

Though based off a Chinese comic, you can quickly identify some influences in Next Gen. There is some Astro Boy in there, a little bit of Terminator (seriously, there is actually a small nod to The Terminator in this movie). But the big comparison to draw is a 2014 Disney movie starring a giant, white marshmallow of a robot. Though their developments throughout the movie are completely different, Mai and 77’s relationship has a lot in common with Big Hero 6’s Hiro and Baymax. And to be frank, Hiro and Baymax did it much better.

The comedic edge to their banter made them more engaging and fun to be with, and on top of that, we didn’t have to suffer through the cliché’ third act breakup with them. To the credit of Next Gen, they do try to make the relationship more intense, with Mai dealing with some serious family issues. And 77 with the voice of John Krasinski makes him a very likeable character. Their relationship remains the central focus of the movie and unlike Big Hero 6, less time had to be committed to the superhero elements. 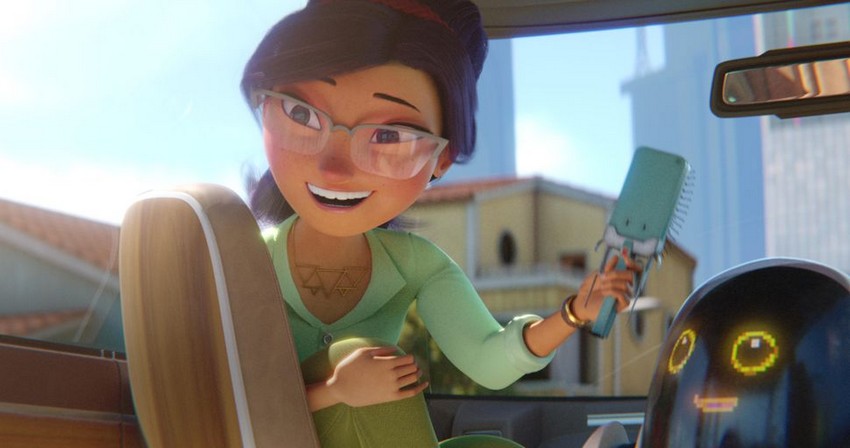 However, this is the where the film starts to falter. There are problems with its tone, pacing and style. That introductory scene with Mai’s father and the opening credits, while sporting a rugged, gangster-like aesthetic, is completely ditched in favour of whimsical sincerity by the end of the first act. Perhaps not stylistic whiplash, but still ill-focused. Meanwhile, story elements like character death can very difficult to handle in a children’s movie, and Next Gen does not handle it well. It is quickly overlooked once it has occurred, and while it may be inconsequential to the other characters and their plight, it may be disconcerting for younger viewers. This is a kids film trying to have a slight edge for adults (see Mai’s hyperactive puppy voiced by Michael Pena for clarification), and it fails at that.

And finally, while Next Gen can be awarded points for trying to focus on the relationship between Mai and 77, and less on the saving-the-world story aspect like in Big Hero 6, those points are taken away by the fact that the slow pace around that relationship does not fit well with the final conundrum. This is especially true in how Mai’s relationship with her mother is reconciled. That is where you may get whiplash. All this said, there is nothing wrong with Next Gen for its target audience. The lessons it teaches are valid and the morals are clear cut. But it is a film with faults, and it will forever be compared to Disney’s product of the same concept. Sorry.