The Nintendo Switch is a startlingly clever little console. It has more gadgets and gizmos shoved inside its diminutive form than would otherwise be considered sane. Gyroscopes, HD Rumble bits, accelerometers thingies, infra-red cameras, NFC readers… It kind of seems like a bit of an overkill, doesn’t it?

Then Nintendo announced the Labo series of experimental cardboard peripheral “devices”. I say “devices” with enormous air-bunnies because they’re literally pieces of folded cardboard until you jam one or both of the Joy-Con remotes into them. Then they turn into peripheral control devices, or Toy-Cons (so twee, but kind of endearing). And that’s when Nintendo’s total overkill of gadget shoehorning suddenly makes so much sense. 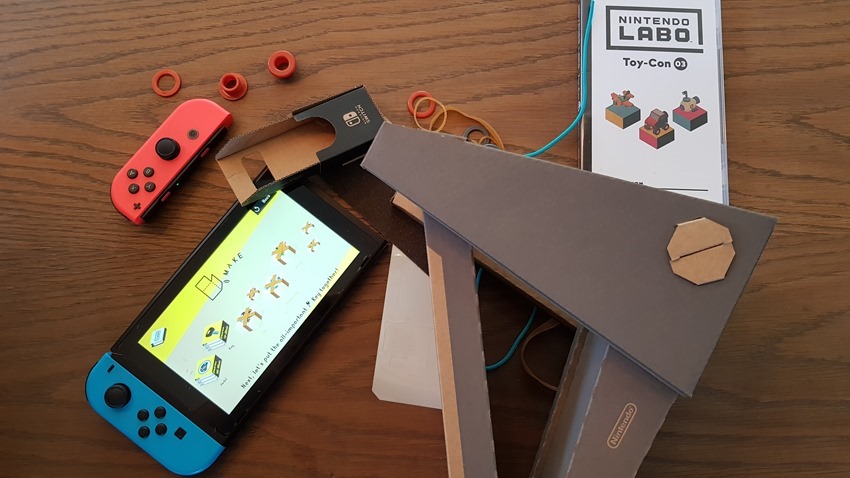 The Vehicle Kit is the third Labo entry to come to market. I haven’t had the chance to get hold of the original two Labo sets (the Variety Kit and the Robot Kit) so this Vehicle Kit was my first foray into Nintendo’s bizarre cardboard world. And what an ingenious world that is.

In case you didn’t know, Labo Kits ship with a game card for your Switch, a whole bunch of sheets of pre-punched cardboard, heaps of elastic bands, reflective stickers (which talk to your IR camera), some sponge stickers to add grip to the bases of the controllers, string, and some plastic grommets. There are four Toy-Con controllers to build, as well as some smaller peripherals like a cardboard spray-paint can for customising your in-game vehicle’s paint jobs.

I was somewhat surprised by how long it took to assemble some of these Toy-Cons, but each set of instructions does indicate a ballpark build length before you dive-in and find yourself committed for two hours. Instructions are clear to follow (sometimes pretty hilarious too), and you’re able to fast-forward or rewind each step in case you’ve been extra clever and built ahead, or extra silly and missed something. The pre-punched sheets of cardboard allow you to pop out the various bits and pieces, but what this does mean is that by the time you’re done building each Toy-Con, you’re left with a mountain of scrap cardboard to recycle. Because you do recycle your rubbish, don’t you? (Please recycle your rubbish. Please.) 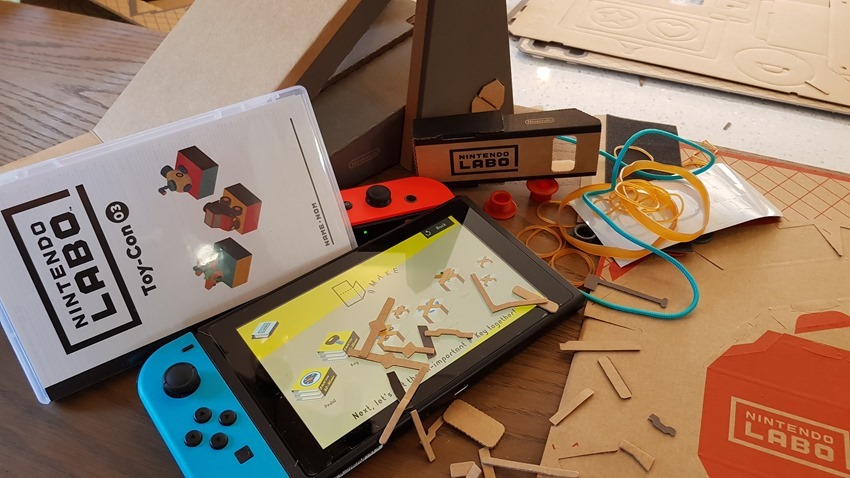 The biggest criticism the previous Labo Kits received was that the games they shipped with were fairly limited in their replayability. The original Labo kits must have felt more experimental in nature, but the Vehicle Kit I’ve been fiddling with for the past few days definitely has more game to it than what I’ve seen with previous Kits. You control a little blue robot chap as he traverses an open-world in a car, a plane, and a submarine. Obviously each mode of transportation has its own cardboard Toy-Con peripheral.

The world is split into ten different sections, and each section has eight different tasks to complete ranging from finding the giant flag in each realm, to helping fishermen reach their favourite fishing spots, or constructing a giant snowman out of three anthropomorphic snowballs. Some of the tasks are more fun than others, but the whole offering is definitely aimed at kids. My five-year-old (who adores our Nintendo Switch) had a lot of fun exploring the world, finding giant dinosaur bones in the rocky canyons, and yetis hiding in the snow-capped mountains. He did, however, get frustrated by having to refuel the vehicles, as lining up the car alongside petrol pumps requires some finer driving controls. That being said, the game is aimed at kids ages 7 and up. 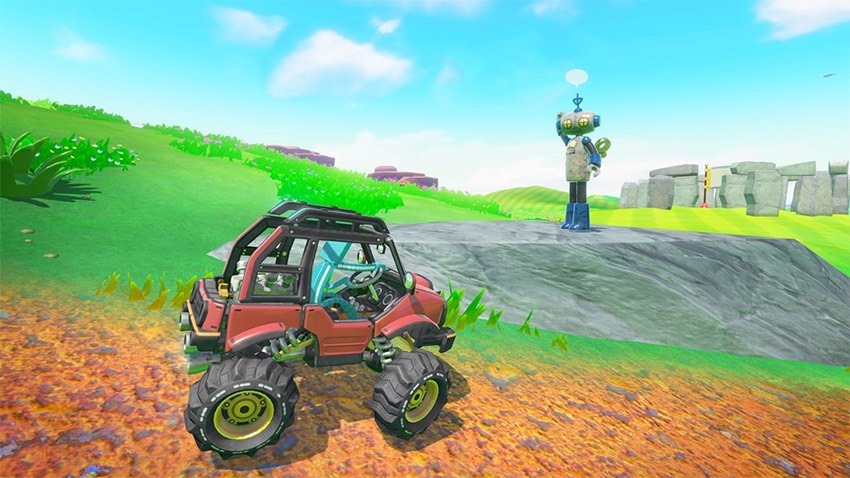 While the game portion undoubtedly has more to offer in the Vehicle Kit, it’s not something you’re going to sink dozens of hours into. It is a lot of fun swapping from vehicle to vehicle, and switching between the various Toy-Con models, but the overall “main game” if you will is still rather limited. There are races to complete and a vehicle battle mode to try to gamify things a bit more, but they’re not going to add hours to your experience. What is fantastic is that the Toy-Con Garage makes a return in the Vehicle Kit. This section allows you to program your own Toy-Con and Joy-Con interactions by linking nodes together from left to right. Essentially it’s some very basic programming that makes use of the Switch’s control screen to drag-and-drop different commands and actions. Like a lot of creative suites aimed at a game’s community, its robust enough to develop some amazingly clever inventions. Because it’s so accessible and makes use of the Switch’s Joy-Cons, the Toy-Con Garage is quite a nice introduction to programming for kids. 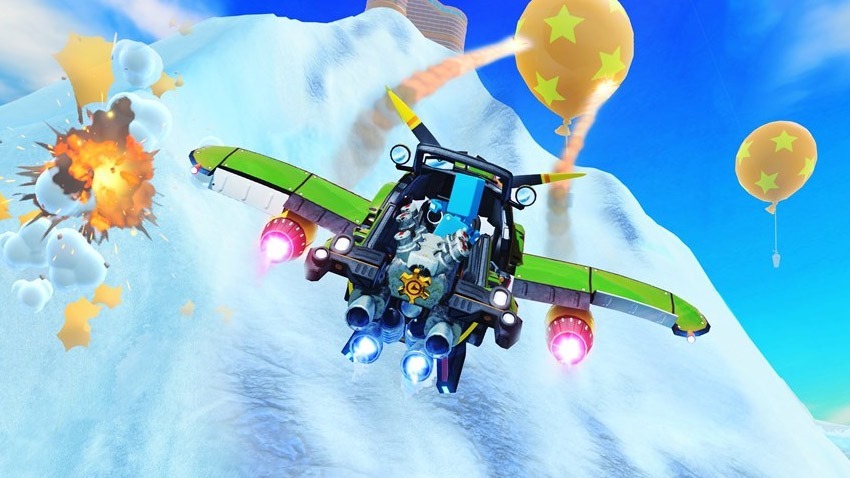 Labo’s gaming elements do not engage as much as Nintendo games normally do, but Labo’s charm lies in how fascinating the whole system is in its design and construction. Anyone with an iota of interest in how things work will love the time they spend with this Labo set. The whole package is so utterly brilliant in design and execution that I refuse to believe anyone sitting down to fiddle with a Labo Toy-Con won’t be impressed by what’s in front of them. Levers crank, dials click, and pulleys snap back into position; the design of each Toy-Con in the Vehicle Kit is exemplary.

The software also includes a section of really insightful explanations on how each Toy-Con actually works, and how the various cardboard elements interact with the multitude Joy-Con sensors. This “Discover” section has some amusing narrative elements and characters explaining each component of each Toy-Con; it’s rather nerdy but having already been wowed by the construction of each model, being shown how they actually function was just icing on top. 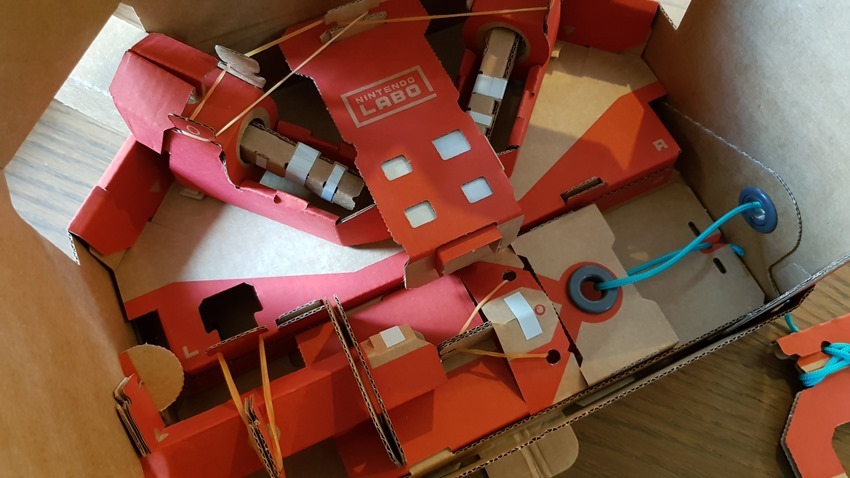 The Toy-Cons are also surprisingly robust as all four of them (the steering wheel, the accelerator pedal, the joystick, and the submarine controller) managed to survive an afternoon unscathed with my three-year-old. If they can survive him they’ll survive anything. (Side note: the accelerator pedal makes a great catapult for Hot Wheels and LEGO men.)

While the game portion of the Labo Vehicle Kit is charming and playful, it isn’t exactly ground-breaking like the cardboard Toy-Cons themselves. Fortunately, Nintendo updated Mario Kart 8 to make use of the Steering Wheel and Pedal Toy-Cons. Unfortunately, the game is not easy to control with them. I’m not terrible at Mario Kart 8, and I can normally consistently come in in the top 3, but I cannot come anywhere other than stone-last while trying to play with these Toy-Cons. While it’s a neat idea, the control is not what it needs to be.