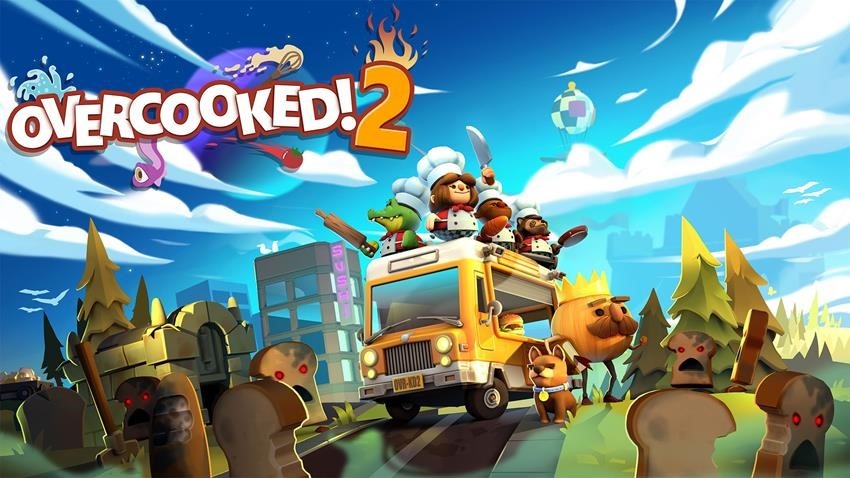 The kitchen can be a chaotic place, but it’s hard to imagine any real ones usurping the mayhem that unfurls in each one of Overcooked 2’s challenges. Not only do you have to prepare ingredients, cook them to perfection and make sure they’re assembled to order, but now this co-operative focused party game is allowing you to toss food around. Yet with its singular new mechanic and a host of quality of life changes, Overcooked 2 finds a cohesiveness that eluded the first game at times. This sequel feels better to play at every avenue and ramps up its challenges in a more logical way. If Overcooked was just slightly underdone, its sequel is that perfect medium rare.

Overcooked 2 swaps out a ravenous meatball for hordes of undead toast this time in another loose attempt to try to string together a series of increasingly difficult story challenges for you to undertake. Its writing is only slightly funny, and the overall premise just never imposes itself enough to justify its existence. But it’s infrequent enough to not really bother you either. The world is in danger, and you need to cook. And cook you shall, in some brand new multi-tiered stages and across a variety of different recipes, each building upon the simplicity that came before it. 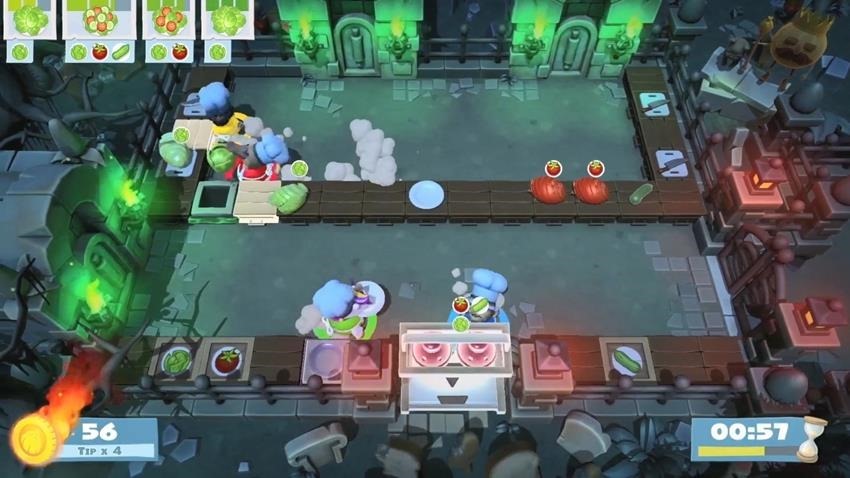 The crux of Overcooked 2’s gameplay is teamwork, and each of its stages does a great job of highlighting that. A kitchen might be split in the middle, for example, isolating cooks with some ingredients and cooking utensils. You’ll have to use a new throw mechanic in this instance, which allows you to toss raw food across a kitchen with ease. A well-timed toss will see it land directly in another player’s hands, or straight onto a cutting board for fine processing. This single mechanic eases the frustrations of some stages in the previous game that certainly needed it, while also adding an additional layer of strategy and chaos into the mix.

This chaos sits well in the many new stages that Overcooked 2 introduces, each with their own challenges. One kitchen features two conveyor belts that restrict movement from certain directions, while another busy sushi bar will have patrons walking right through the kitchen and in your way. Other more special types are even multi-layered, with a hot air balloon disaster (seriously, who is even eating up there?) transforming into a derelict kitchen disaster mid-way through. Overcooked 2 dials back complexity somewhat to offer stages that feel far fairer this time around. When you fail it’s because you didn’t nail down a smart enough strategy, and not because some of the physics of the moving kitchen decided to play poorly. It’s a welcome refinement. 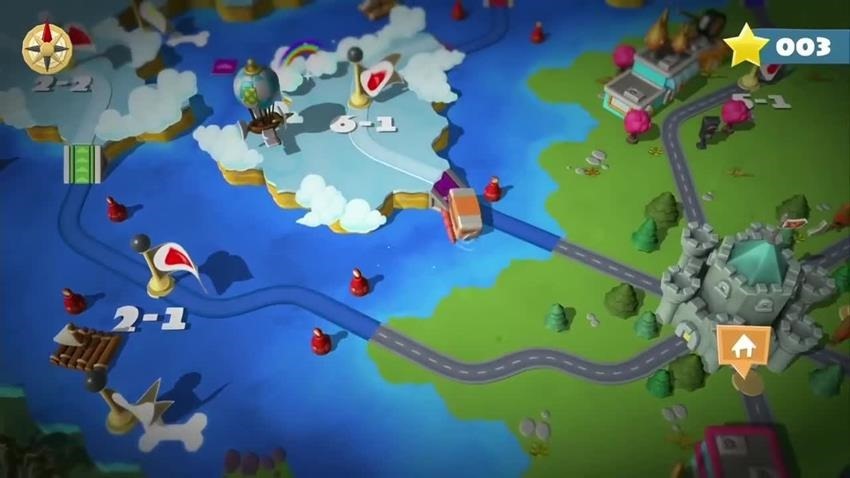 Refinements are across the board too, which elevate Overcooked 2 from simply being just another helping of the gameplay you might have loved from the first. You’re still able to scoot around the kitchen with fine movements and dangerous dashes, but a more useful user-interface keeps things manageable. A simple highlight has been added to better show which part of the kitchen you are about to interact with, which alleviates frustrating miss-presses that could cost an entire dish. It’s a small change that has a big impact, especially if you’re not as versed with a controller and are just hopping into for some party fun.

The challenge curve is also far less intense this time, and I found myself breezing through the opening stages of the story in a way that I couldn’t recall from the first outing. If you’re up for more spontaneous play though, a new Arcade mode strips out the narrative fluff and gets you right into the action. It’s a good addition that is perfectly suited for short bursts of play with up to four friends. Online play is the biggest addition though, and one that the first game was sorely lacking. Now you don’t have to have friends on the same couch to shout at for tomatoes. Instead you can party up online and do the shouting from a safer distance, which gives Overcooked 2 far more use cases than it previously had. 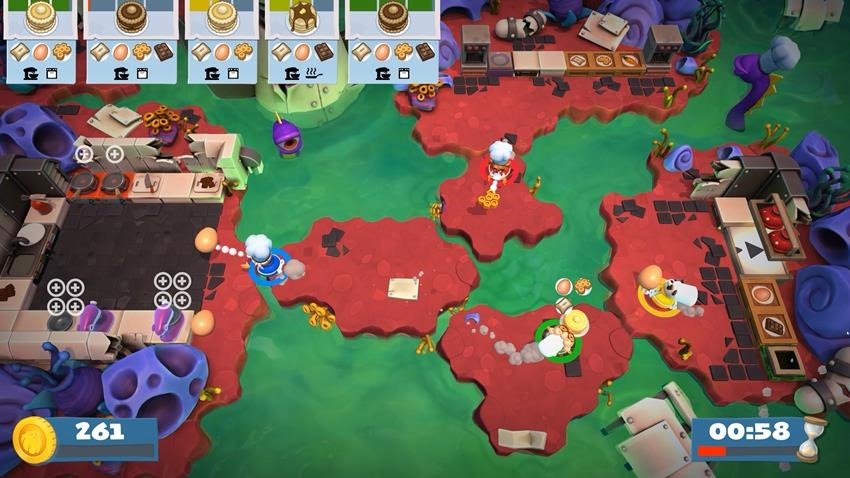 Unfortunately, it’s still a game you’ll want to play with friends. Solo play still involves you having to swap between two chefs in the kitchen, which limits what you can achieve in the same space of time. The stage goals are altered to accommodate for this, but it’s simply not fun to play. Without the unpredictability of a friend moving around in the same space, Overcooked 2 loses its core appeal and turns into a mundane checklist of tasks to perform. If you’re not planning to play with other people, this really isn’t the game for you. 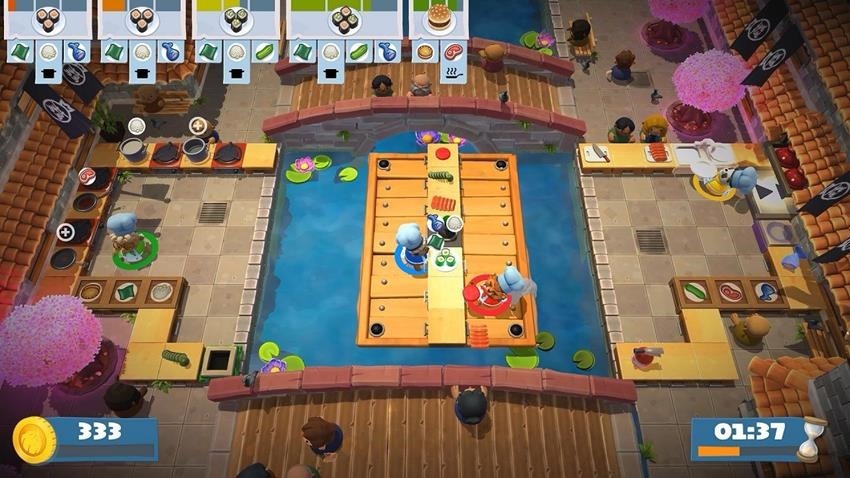 It would be a shame to discredit it on that front alone, because Overcooked 2 proves that there’s perfection to be found in repetition. This sequel isn’t a drastic overhaul of the formula its original established, but instead a series of small, smart refinements that make an already engrossing puzzle game both more welcoming and challenging in the same breath. That’s a difficult balance to strike, but it’s one that Overcooked 2 embellishes with a much-needed online mode and more spontaneous friendly modes. If you’ve never played Overcooked, this is certainly the version to pick up to correct that.