More than a week after seeing Phantom Thread, I was still mulling over auteur Paul Thomas Anderson’s latest bit of artistic expressionism. This tale of finicky 1950s couturier Reynolds Woodcock and his tumultuous romantic entanglements had metastasized in my thoughts as I puzzled out my emotions. Like with Darren Aronofsky’s mother! – a film which shares some similarities, but luckily not of the gonzo offensive kind – I went through many different iterations of my opinion before I finally settled on a verdict. 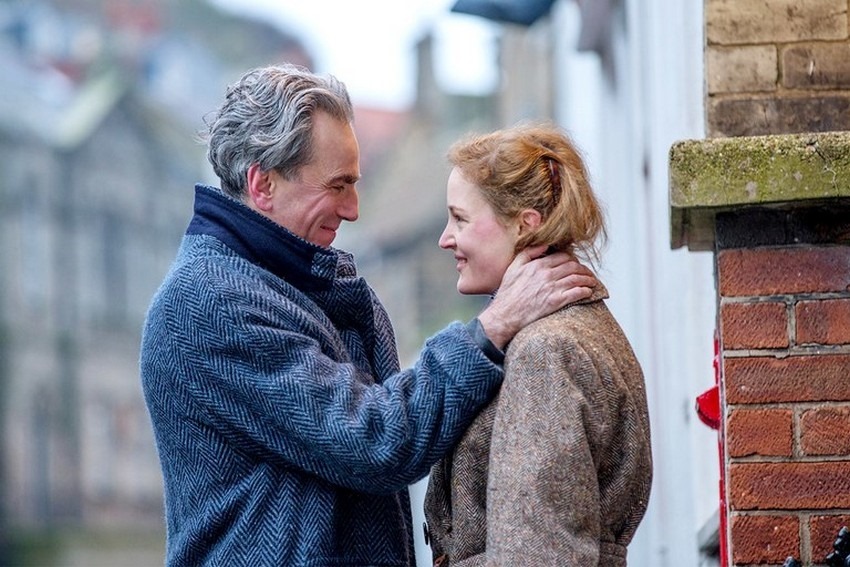 Well, that’s not quite true. I immediately loved Daniel Day-Lewis’ performance as Reynolds. He is simply the greatest living actor today and Anderson here gives the maestro thespian a chunky character, heavily layered in neuroses and minutiae, to sink his method acting teeth into. As always, Day-Lewis bites deep and strong and holds nothing back.

As a character, Reynolds is not the raging whirlwind of chest-beating ambition like Daniel Plainview in There Will Be Blood, Day-Lewis and Anderson’s masterful former collaboration. However, with his obsessively controlling manner, glaring Oedipus complex, and bordering-on-uneasy relationship with his sister Cyril (Lesley Manville, in peak form), he’s a gripping mystery himself. If Day-Lewis’ recently announced retirement holds true, then this is certainly a worthy point to end his illustrious career on.

It’s also a point from which to launch the international career of Vicky Krieps, the Luxembourgian actress who somehow threatens to steal some scenes from her celebrated male co-star. Krieps brilliantly plays Alma, an awkward waitress who literally stumbles into Reynolds’ life at an English countryside restaurant, for whom he has an instant attraction.

The older and pristinely preened Reynolds intrigues Alma in equal measure and so she accepts when he asks her out. Soon she is swept up in the great House of Woodcock, Reynolds’ internationally acclaimed fashion empire which clothes royalty and the very elite of the elite, moving into his lavish London home to become his muse, personal assistant and romantic partner. Well, kind of, on that last point. 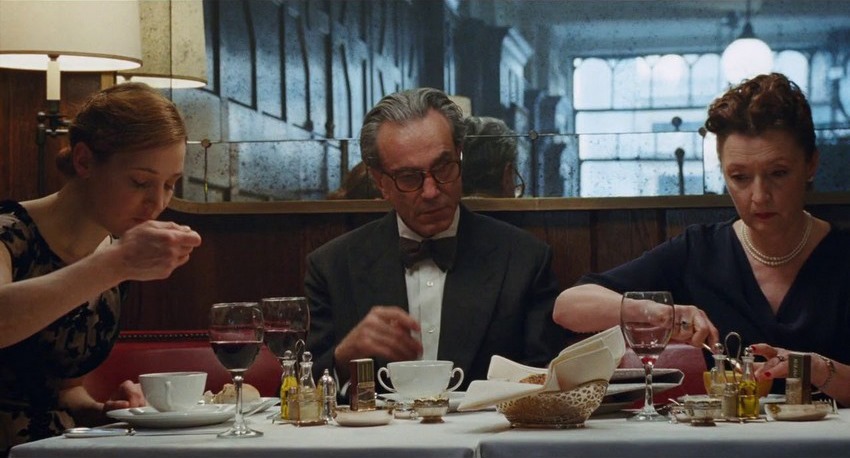 Living with self-proclaimed “confirmed bachelor’” Reynolds and his iron-fisted rules and chasmic swings of mood from lovably attentive to chillingly aloof, not to mention Cyril’s ever-present disapproving gaze, proves to be an intense challenge. One which Alma is not the first to take on – as Cyril’s austere dismissal of his previous romantic entanglement in the film’s opening moments makes clear – but one which she is willing to give everything for if it means holding onto him. Even, paradoxically, if that means destroying him.

And it’s here that we find the gist of Phantom Thread, in the violent ebb and flow of Reynolds and Alma’s relationship. A relationship which can often only be described as aberrant as they bring out both the best and worst in each other. And Anderson presents it all as a heavily textured fever dream, with an utterly bewitching musical score from Radiohead’s Jonny Greenwood adding to that feeling of otherworldliness. Dreams are not always great storytelling mediums though.

Much like the jumbled up, pile-on structure of the subconscious, for large parts of Phantom Thread there doesn’t appear to be a clear driver of the plot as Reynolds and Alma oscillate between loving and abasing each other. When the big narrative push does come though, it’s oddly timed and presented so quickly and mundanely that you may think there’s still an entire act to follow, only for the credits to roll a few minutes later. Dreams can also be impenetrable or obscure and Phantom Thread is no different. Anderson’s tale occasionally sways to some very odd places which clearly hold importance for him, but the motivations for which are opaque to the audience. As my subsequent week-long ruminations on the film revealed though, this is all intentional. Phantom Thread is at its core an allegory of the destructive relationship between artist and muse. When it’s revealed that Reynolds secretly sows things into the inner linings of the dresses he creates which only he knows the existences and meanings of, it may as well have been Anderson holding the needle as he winks at the audience.

And as much as he loves putting in those seams, he revels in pulling them apart as well. This is not virginal ground for Anderson – for most of his later career, the auteur has had an obsession with characters warped and twisted until mining the why’s and how’s of their current degenerated state becomes the actual narrative. Their flaws are the materials he uses to create his art. This is a love story, after a fashion, of two intensely broken people who are drawn together in a type of beautiful disaster, the actual stitching which holds it all together only visible if you get really up close to it.

As you can expect then, like with most of his work, Phantom Thread is not wide crowd-pleasing fare. For some, this will be a boon, a welcome and challenging diversion from the popcorn-munching norm where every plot point is spelt out and punctuated with explosions. For others, it will mostly be pointless and pretentious bunkum. Lacking the visceral punch of There Will Be Blood (Anderson’s best film), I initially felt a tiny fraction of the latter as I walked out of the cinema. A week later though, and I found myself mostly leaning towards the former. 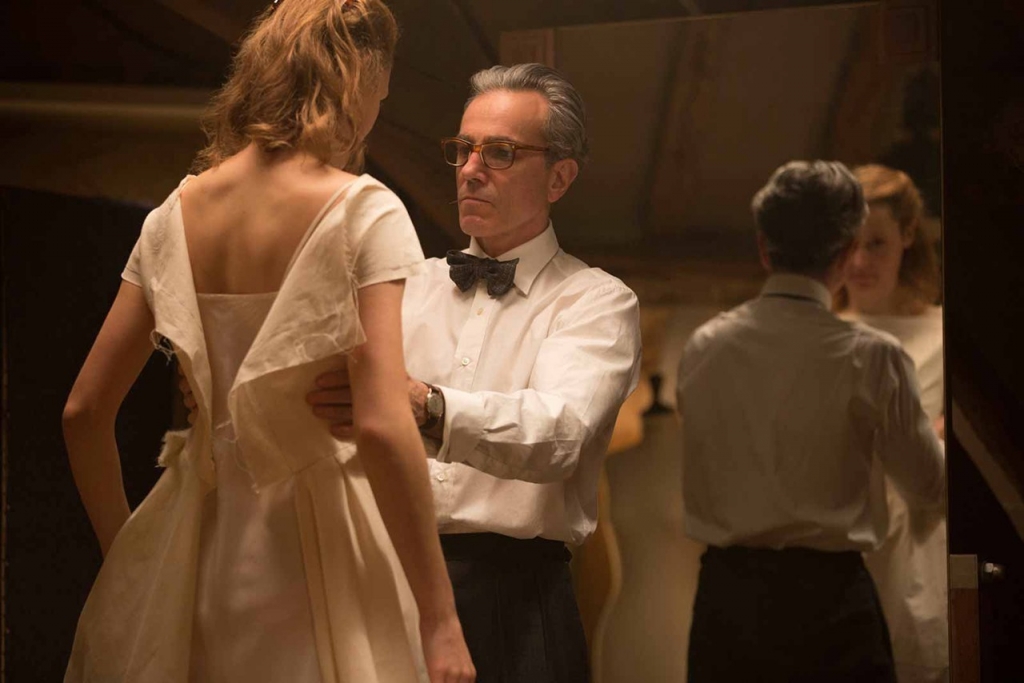 I say “mostly” as there are still a couple of plot dalliances that could have been scripted tighter, and some scenes drag on a bit too long while others are cut maddeningly short. None of these are overtly glaring blemishes though – and they’re especially not that noticeable once you get lost in the film’s sumptuous costumery and production design. If you will allow me one last clothing metaphor, I would say that Phantom Thread is most assuredly not a perfect creation, but when it’s Daniel Day-Lewis (and to a surprising extent, Vicky Krieps) showing it off, it certainly looks to be a finely tailored piece of art.